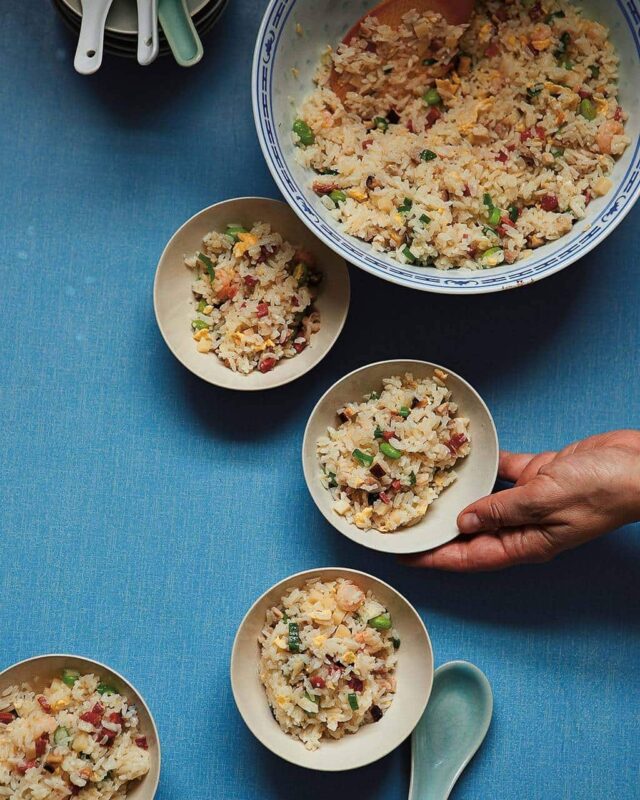 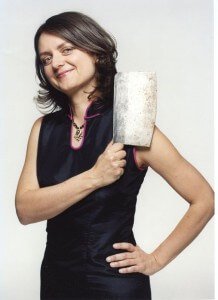 Fuchsia Dunlop is one of the foremost experts in Chinese cuisine, and was one of the first modern Western chefs to be classically trained in China. Two of her books, Revolutionary Chinese Cookbook and Land of Plenty: A Treasury of Authentic Sichuan Cooking serve as my resources for authentic Chinese recipes.

Fuchsia’s latest book, Land of Fish and Rice: Recipes from Culinary Heart of China, focuses on the region south of the Yangtze river, and its modern capitol of Shanghai, called “Jiangnan” region. 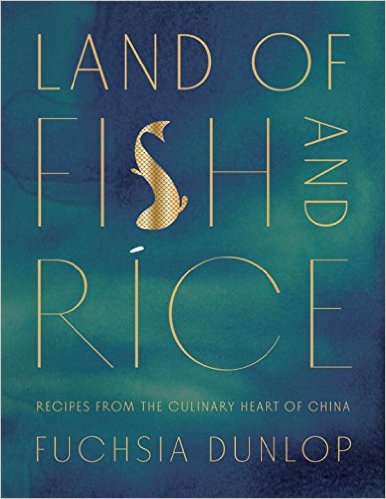 The food of Jiangnan is light (unlike Sichuan’s oily, chile-laden food), and as the title of the book suggests, relies heavily on the bounties of the sea and plentiful rice paddies.

This book’s recipes are near and dear to my family – this is the region of my Dad’s hometown cooking. We’re delighted to share with you Fuchsia Dunlop’s recipe for Yangzhou Fried Rice.

What is Yangzhou Fried Rice?

Yang zhou chao fan  扬州炒饭 is a fried rice dish that features egg along with leftover bits of ham, shrimp and meat. At Chinese restaurants in America, sometimes the dish is simply referred to as, “House Fried Rice.” Ingredients may differ from day to day, depending on what leftover protein is available.

Excerpt from Land of Fish and Rice: Recipes from Culinary Heart of China by Fuchsia Dunlop. Reprinted with permission.

“Late one night, I dropped into my friend Yang Bin’s restaurant in the old quarter of Yangzhou for a bowlful of noodles, and happened also to meet his cooking master, Huang Wanqi.

Chef Huang started talking about a 2,000-year-old gastronomic text, “The Root of Tastes” (ben wei pian), and told me he thought Yangzhou cooking best represented the subtle magic it described. He went on to explain the mysteries of Yangzhou fried rice, the only dish from this ancient gastronomic capital that has so far achieved international fame. He told me how to cook the secondary ingredients in chicken broth, and discussed the different roles that beaten egg could play in the dish.

“If you begin by frying the beaten egg, and then add the rice,” he said, “you will have ‘golden fragments’ of egg in the rice (sui jin fen). If, instead, you fry the rice and then pour in the egg, the golden liquid coats each grain of rice, so it’s like ‘silver wrapped in gold’ (jin guo yin).” Both, he said, were traditional methods.
You don’t have to go into such detail to appreciate this dish, one of the finest variations on the fried rice theme. The rice is speckled with little nuggets of delicious ingredients and infused with the umami richness of chicken stock. 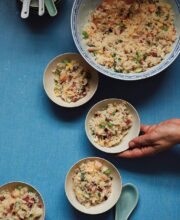 Cut the pork, shrimp, ham, chicken, mushroom, if using, into small dice. Thinly slice the spring onion greens. Beat the egg with a little salt and pepper. Break the rice up into small clumps to make it easier to fry.

Heat 2 tablespoons of the oil in a wok over a high flame. Add the pork and stir-fry briefly until the pork is pale. Add the ham, chicken, shrimp, mushrooms, peas, and continue to stir-fry for 1–2 minutes, until everything is hot and sizzling. Add the Chinese rice wine, then pour in the stock and bring to the boil. Season with salt, then pour off into a bowl and set aside.

Rinse and dry the wok and return it to the heat with the remaining oil. When the oil is hot, add the beaten egg mixture and swirl it around the base of the wok. When the egg is half-cooked, add the green onions and all the rice and stir-fry, breaking up any clumps. When the rice is very hot, smells delicious and makes a popping sound around the edges of the wok, add the reserved ingredients in their stock sauce. Mix well and continue to stir-fry for another 30 seconds or so, seasoning with salt or pepper if you wish.