How we make compost in 3 days

I’m almost as obsessed with compost as I am with food. Well, they are related, right? Living out here has taught our family how to conserve resources – like many non-city folk, we have our own well (and no, we don’t have to churn buckets down a deep hole – it’s a little more sophisticated than that), a massive underground propane tank to fuel our outdoor cooking grill, water pumped from our 2 ponds to water the garden and lawn.

This winter and spring has been very dry for us – our ponds, stocked with TONS of fish, turtles and a baby alligator is down by 3/4 (poor fishies!) so we’ve stopped watering our lawn and property for the time being (which is why everything’s a little brown and weedy right now). 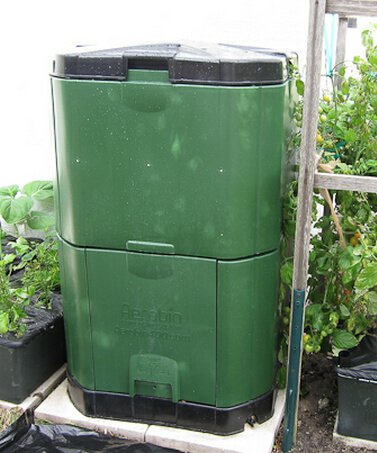 We used to have 2 compost systems – one a worm compost and the other a more traditional compost bin about the size of a refrigerator. It wasn’t quite efficient enough for us (we go through a lot of food in our recipe testing) so I thought – hey, why not COMBINE the two systems? How about throwin’ in all those hungry worms into the giant compost bin and they can eat ‘n poop to their heart’s content. (fyi for compost newbies – the worm poop…errr….”castings”….is one of the riches and nearly free fertilizers for your garden).

So I dumped approximately 3,156 worms (my kids tried to count them but we lost track after 56, so this is just a guesstimate) into the bin. A couple of days later, I looked in and the worms were fat ‘n happy, squriming in, under and around all the kitchen scraps. Every day after that, though, i noticed fewer and fewer worms. A week later, some new creatures emerged. 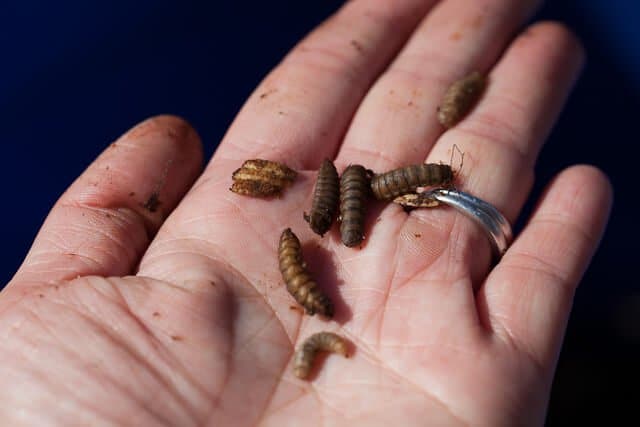 After some research, it turns out these guys are Hermetia Illucens – or Black Soldier Fly Larvae. Hermetia sounds much better. Black soldier flies look like regular flies, but are as big as a wasp and sound like bees.

But unlike regular annoying houseflies, BSF are good guys! They’re not considered pests – they aren’t naturally attracted to humans or food (they’re attracted to decaying matter.) They don’t bite or sting. They don’t buzz around you and pretty much stay clear of the people. The larvae are awesome at processing food scraps for compost.

Another benefit? The hens are MAD for them. Like jump into the compost bin crazy mad. 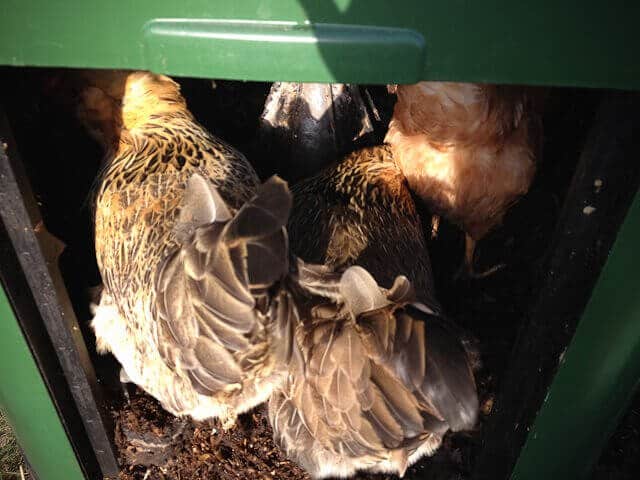 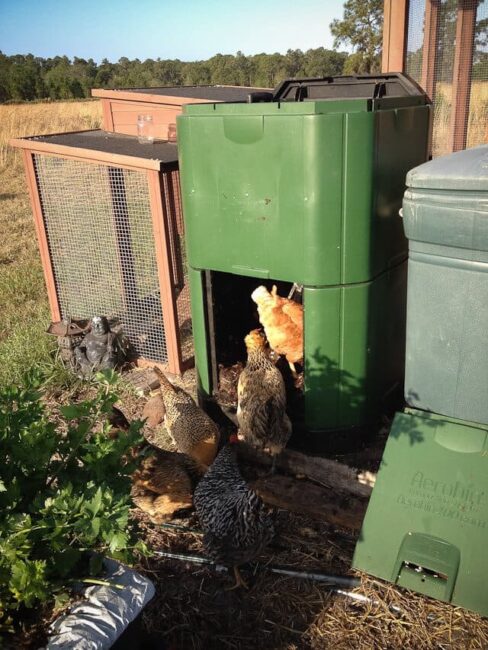 It turns out that the insulated compost bin (we have an Aerobin) is too hot of an environment for the redworms. Plus, the Black Soldier Fly Larvae are so efficient that they tend to eat up all the food, knocking the redworms out.

After a few months of experimenting, I think I have created our little “perfect storm” to make compost in as little as 3 days.

How to make compost in 3 days

Normally, it takes several weeks or months to turn food scraps and yard waste into compost….here’s how we make it in 3 days. 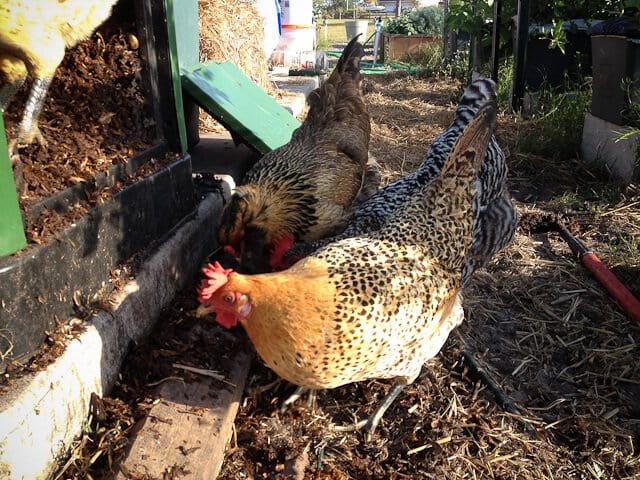 GREEN: From the kitchen: veg & fruit scraps, leftovers, eggshells – I even include dairy and meat because it turns into compost before it can really spoil and smell). Green grass clippings.

BROWN: From the coop: Hen poop + pine shavings. We use small pine shavings for hen coop and sprinkle in Diatomacieous Earth (all natural fossilized diatoms of hard shelled algae) on top of the pine shavings. This helps break down, dry up the chicken poop and acts as an all-natural insecticide.

The coop with 6″ of pine shavings – the diatomacieous earth keeps it clean, so we only have to clean this out twice a year. As we take out the pine shavings for the compost, we’ll add a few handfuls of new pine shavings to the coop each time. 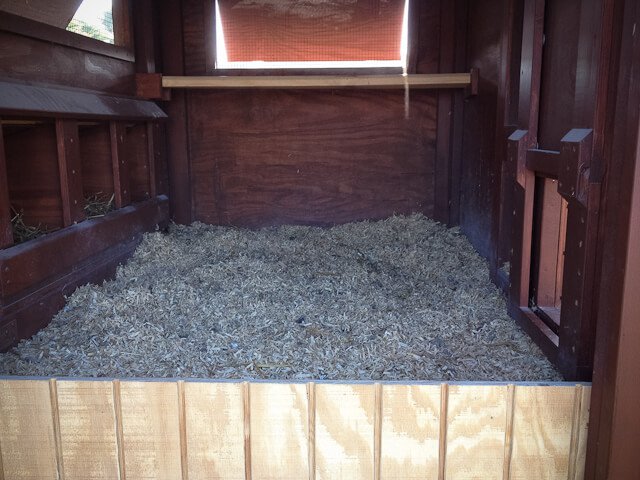 Now I know most of you probably don’t have chickens, but you can still buy pine shavings or straw from a local feed store or farm supply (that is, if you can’t gather enough dried leaves and brown matter from your own yard).

Pine shavings – this package will last you a long time: 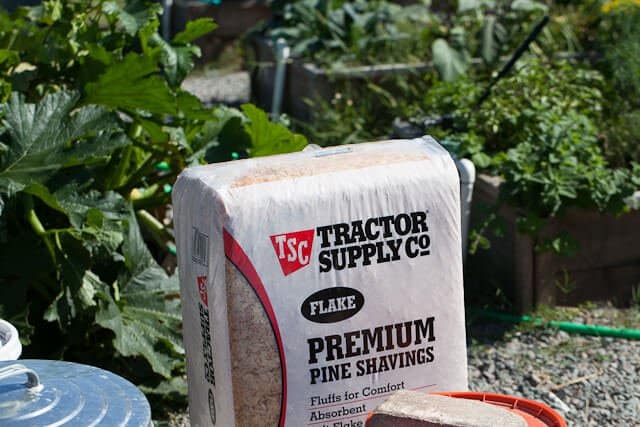 Straw, not hay. Hay is dried grasses, which include seed and healthy stuff for animals. Straw is just dried plant stalk with no nutritional benefit. Just remember “hay is for horses. Hay is not as good for compost – all those grass seeds will end up in your garden. 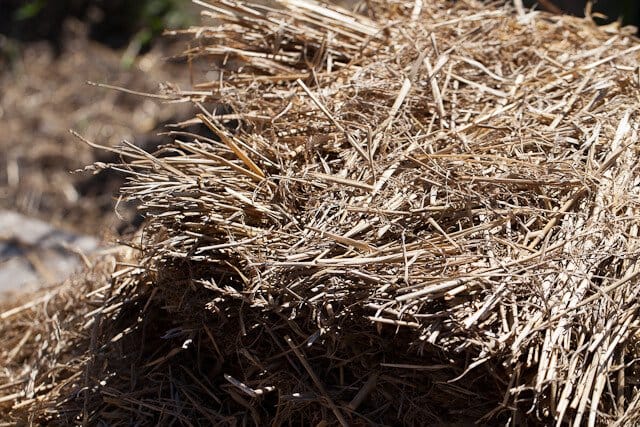 And of course, the Black Soldier Fly Larvae – thousands of them. Where do get ’em? Well, you can create an environment that would attract them.

Day 1: kitchen scraps on top of some pine shavings. 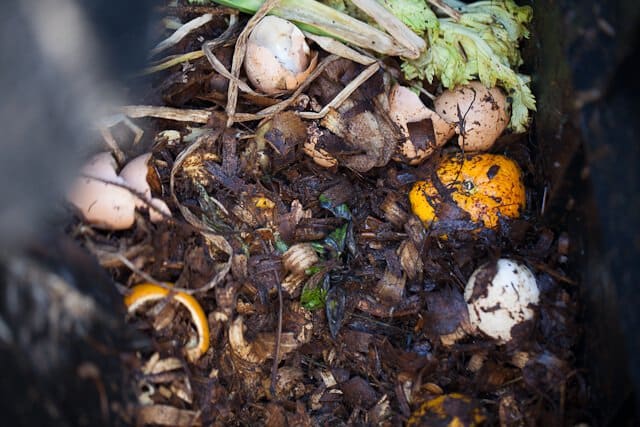 Three days later – most of the food is gone. 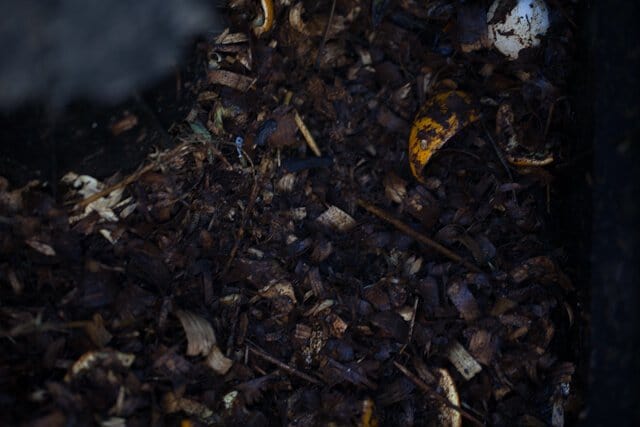 Every day, I take a couple shovelfuls out – here you can see the thousands of BSFL – so many you can’t count. 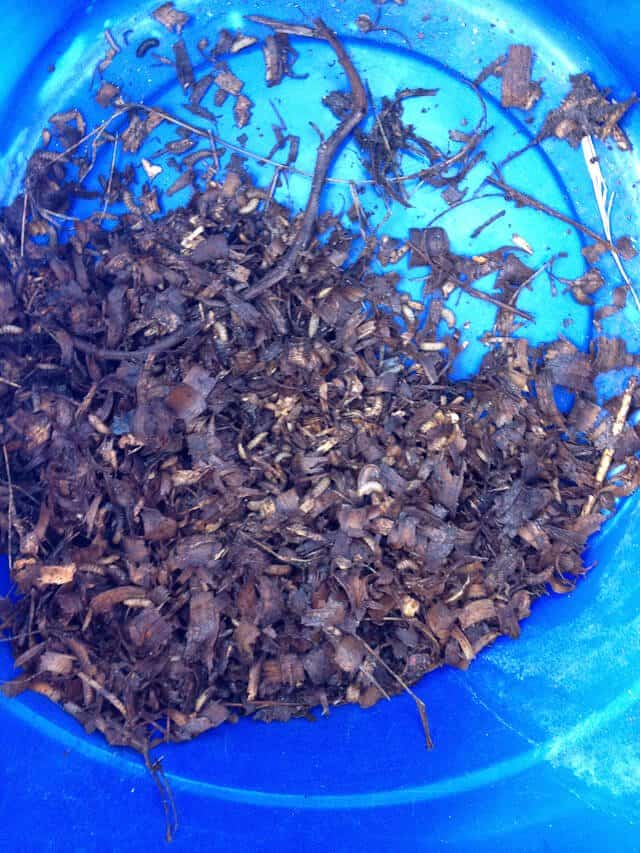 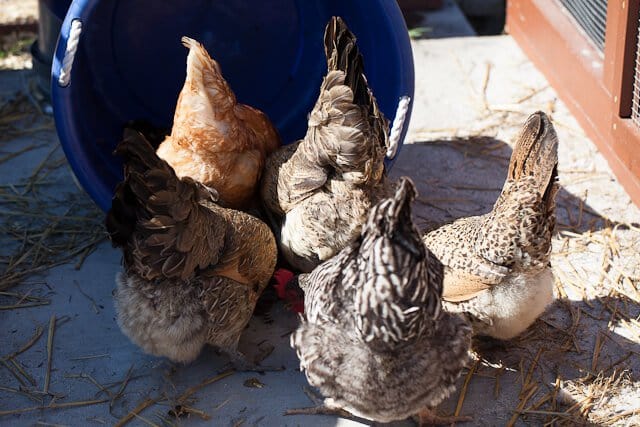 The rest of it – compost – goes in my garden bed mixed with soil. 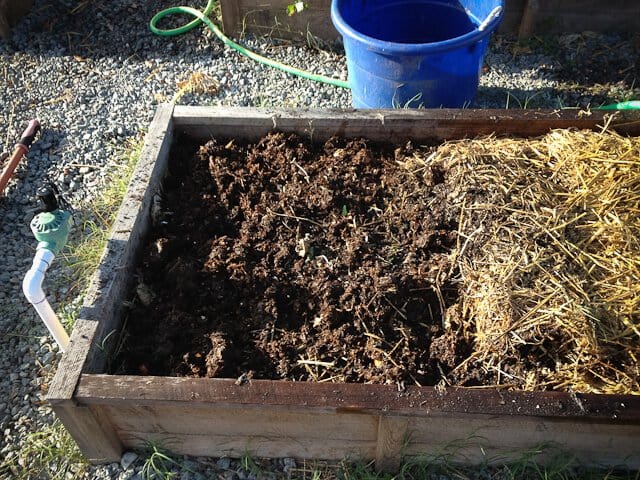 Then topped with 4″ of straw: 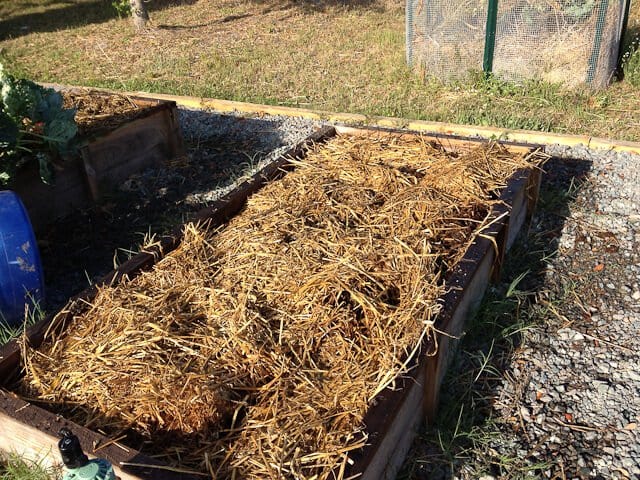 Which insulates the soil, prevents weeds and slows evaporation of water. I’ll just scootch a hay over, dig a little hole with my hands and plant. 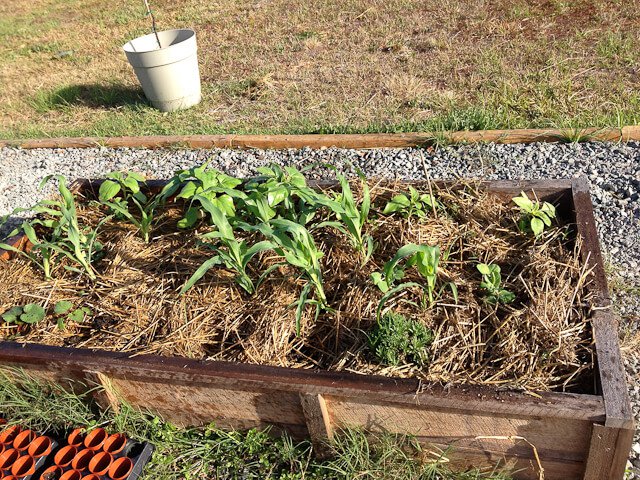 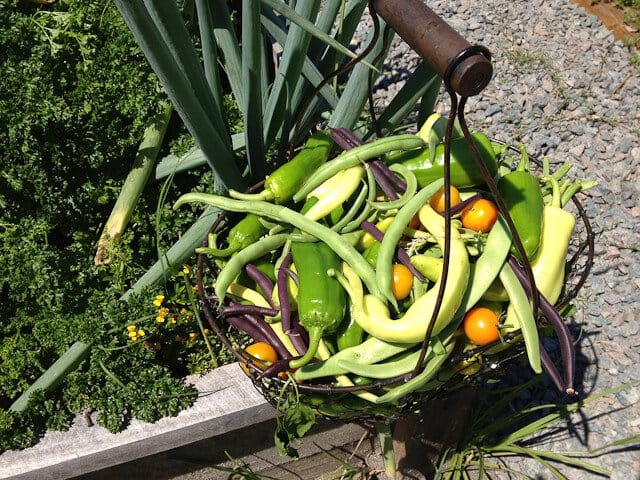 This is Nathan’s girlfriend, Julia. She’s my helper in the garden. 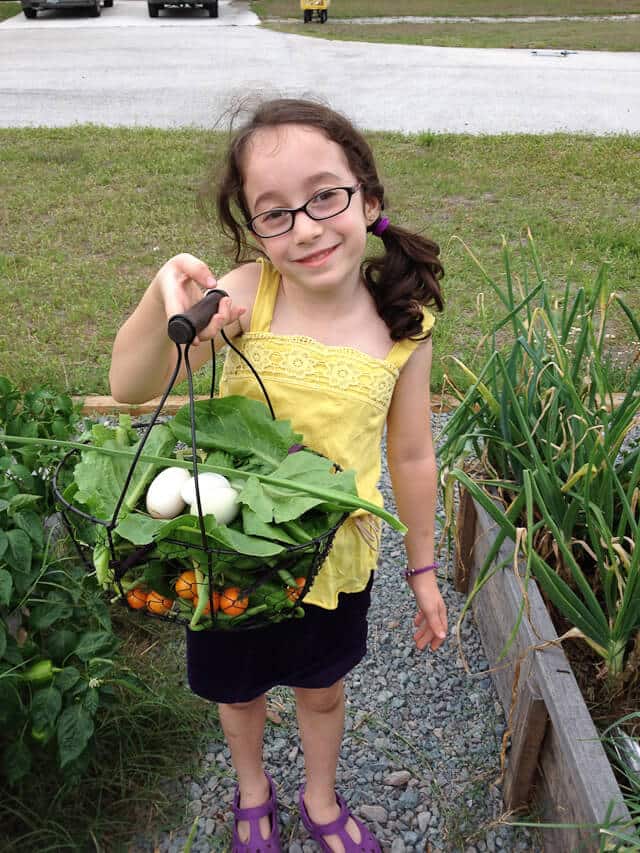 And this is my office sometimes. It’s too nice to stay indoors – so I drag my chair outside, a TV tray, laptop and coffee. Coco, the hens and the baby chicks (oh! I’ll have to post an update on how big they’re getting!) keep me company. 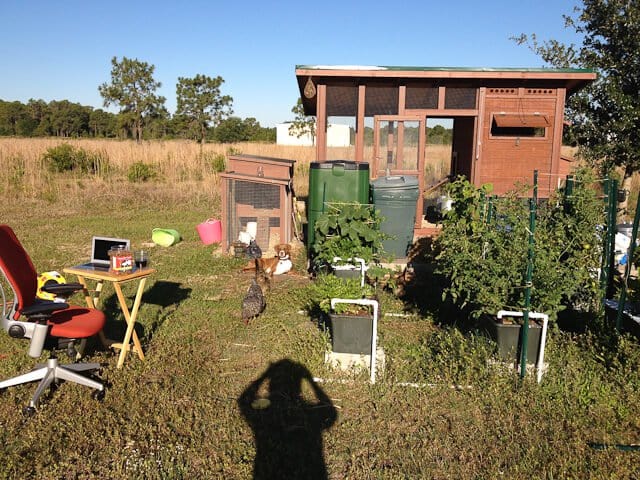 The honeybadger hens aren’t scared of the big dog! 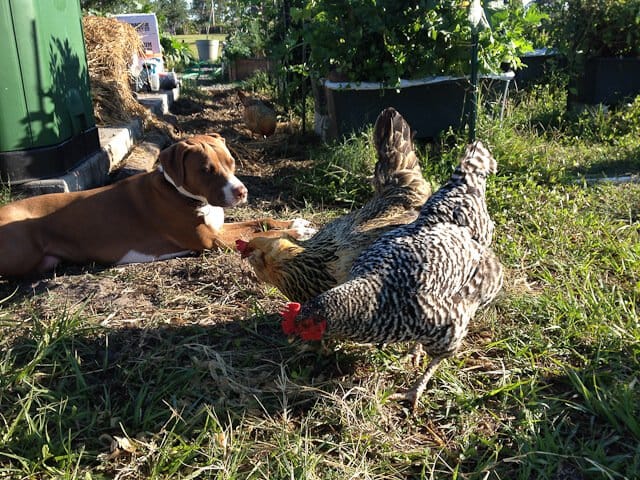 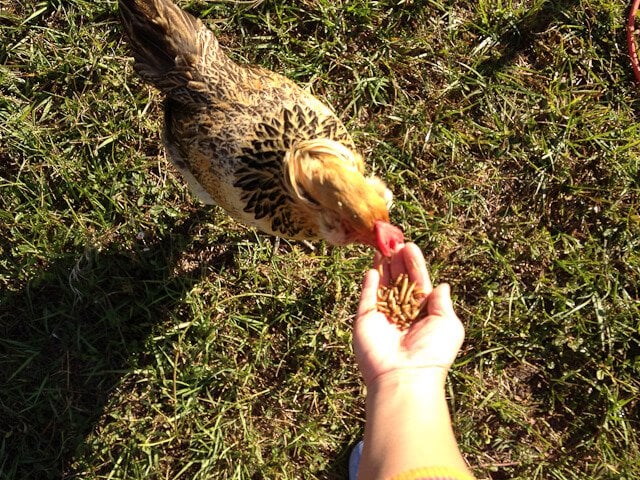 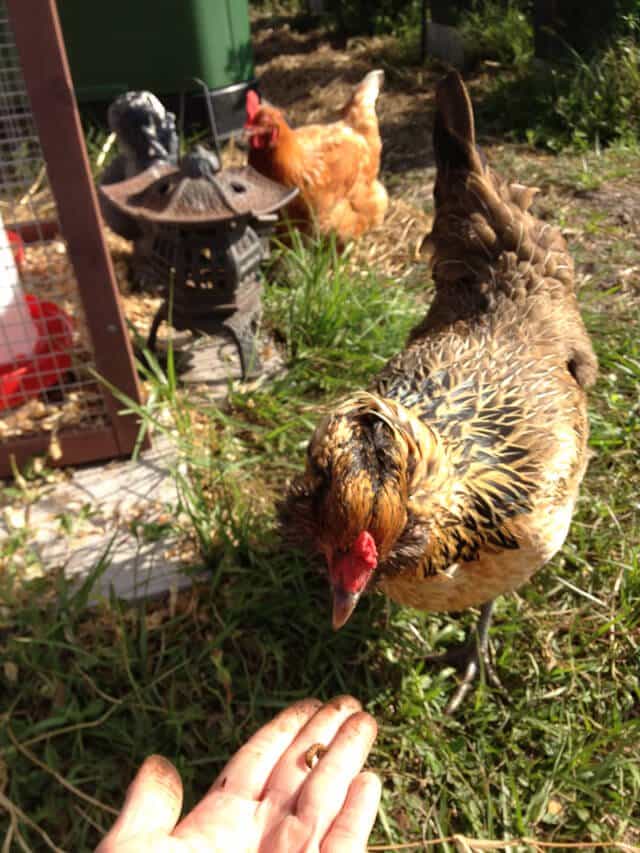