After all the crazy travel in 2010 and 2011, I’m perfectly happy cooking and working from the comfort and convenience of my home. Kelly comes on Mondays to test recipes and Cheri comes on Fridays to edit video. In between, I play in the kitchen, manage the site and edit recipes. Once a month, I’ll drive an hour to Tampa to shoot a short cooking segment.

So, when I got a call from JoAnn Cianciulli (chan-chew-lee), seasoned producer of cooking television shows to come to Los Angeles, I replied, “Heck yeah!” The show she produces is called Recipe Rehab – which just got picked up by ABC nationally, 3 times a week. My mission was to create recipes that families submit for a makeover. “Four recipes. Four episodes. Shot all in one day. Oh, and we’re super short on time and need your rehabbed recipes in 3 days!”

My recipes passed the nutritionist’s inspection and then the team was off to shoot at each family’s home. The family members cooked my recipe and judged it. Oh, did I mention that this was a competition? In each episode, two chefs rehab a recipe. The family cooks both and chooses their favorite.

The week that the families were cooking my recipes was a little nerve wracking to say the least. I’m too competitive to not worry about winning. The producers wouldn’t tell the chefs who won until we shot the episodes in the Everyday Health kitchen.

When I arrive in Los Angeles, this ginormous limo pulls up. 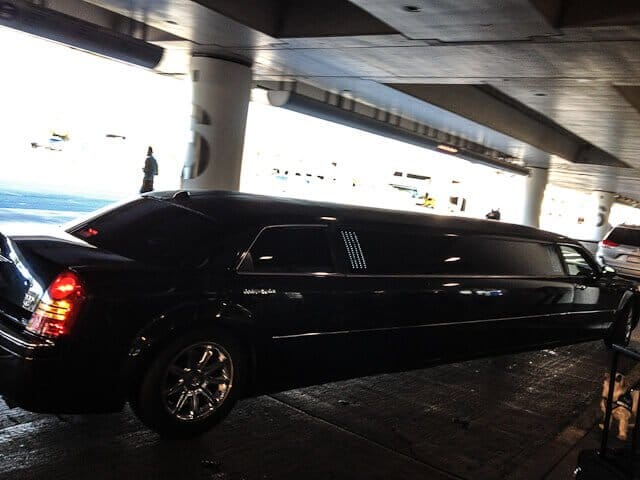 I’m like, “AWESOME! A super star is here! Maybe it’s Justin Beiber!” Not that I”m a JB fan, but hey, if it was him and he HAPPENED to drop a scarf right in front of me, I could grab it and sell it on Ebay! Score!

Like a dork, I got my phone out and start pointing it at the limo, making sure that I wouldn’t miss whoever was getting in or out of the limo. The driver, dressed in a black suit, gets out and comes around the back of the limo. He’s holding a sign. I’m looking at the sign, wondering, “Does it say Beiber? Miley Cyrus? Robert DeNiro?” I’m the paparazzi. I’m ready for action. Knees slightly bent and bracing myself for anything to happen.

Driver walks right in front of me.

So now I’ve got to look cool and quickly change the camera lens direction to point back at me, as if I was just casually Instagramming/Twittering/Facebookering a photo of my smiling face, “I’m here! I’ve arrived in sunny California!” and NOT looking like I’m some star-struck dingaling.

I quickly catch up to the driver with a faux-flattered surprise, “Oh, are you here for me?!” Gaaaawwwdd, how silly of me!

That wasn’t the most embarrassing thing that happened.

Just as I had thought the stretch limo was for a movie star, so did everyone at Baggage Claim Door 6. A small crowd had gathered, just staring at the limo to see who it was for.

Quick. Think fast. I could:

A) act as if I was a super star and make people wonder, “ooooh, who’s that!???” Stars have this confident, nonchalant air about them….the way they walk, the way they flip their hair, the way they stand. I could channel my inner Lucy Liu (though 4 inches too short and 30 pounds too heavy) and strut like I was one of the Charlie’s Angels.

B) just hurry in and shut the door fast before people could realize that I wasn’t Lucy Liu and start dispersing with a disappointed look.

But instead, something even worse happened.

The small crowd of people were obviously tourists – LA people don’t give a flip about celebrity sightings, ESPECIALLY AT BUSY AIRPORTS.  Especially if your stretch limo is BLOCKING THE PATH of 3 cars. That’s 3 very impatient, obviously LA residents in a hurry to beat the 5pm traffic rush on the 405 freeway.

I get in, we hurry away before I could even open my window and do a Lucy Liu wave goodbye to my fans.

Inside, it was awfully lonely. Three small televisions playing a movie with the sound off. Sparkly lights on the ceiling. An assortment of drinks on the side. And a bouquet of Dum Dums in the cup holder next to me. 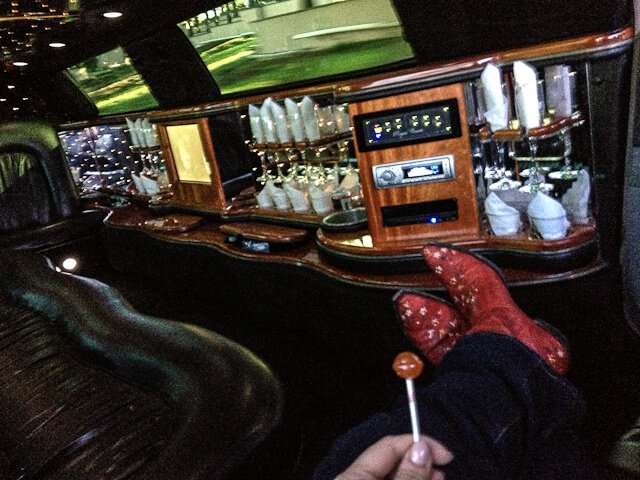 It turns out that the driver was hired to come pick me up in a regular sedan, but his schedule was quite packed and didn’t have time to switch cars after a previous client that required the stretch.

The next morning, I got up early to head to the studio for hair and makeup. Apparently, I had big circles under my eyes and the makeup artist had to put a heavy coat of this fancy white powder to “absorb, reflect and illuminate.” But will it make me a better cook so I can win this competition? 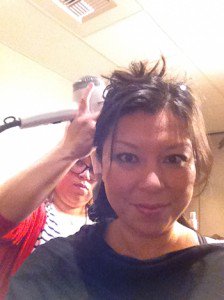 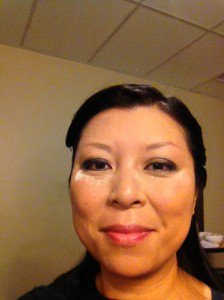 It was going to be a LONG day – four episodes! 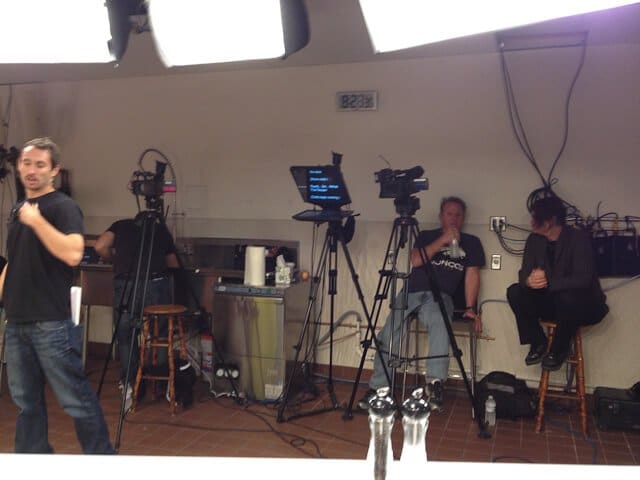 The host is Danny Boome! Did you love him from Rescue Chef as much as I did? 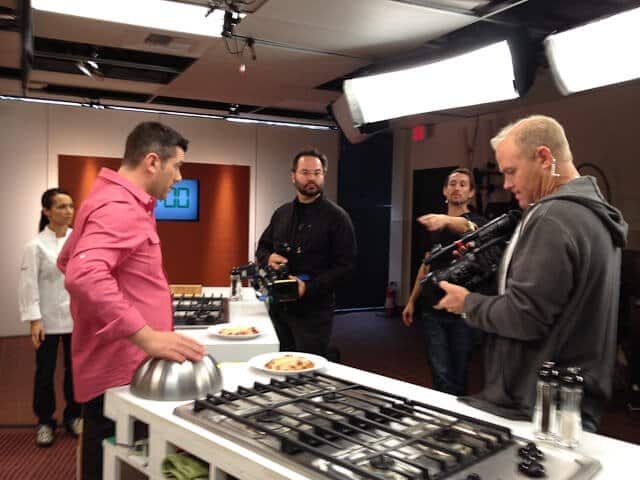 The kitchen production crew got everything prepped and ready for us: 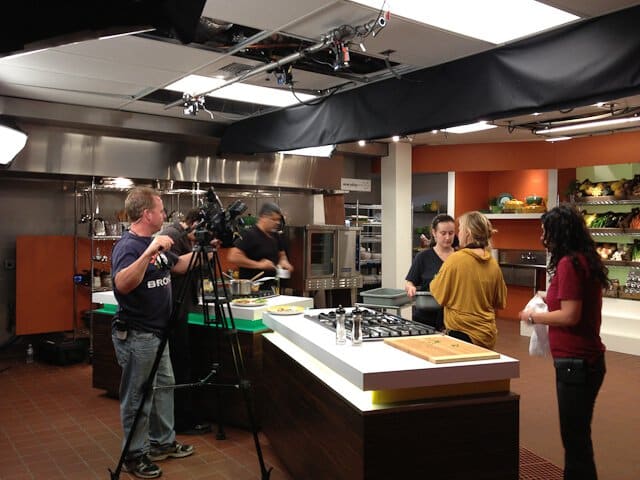 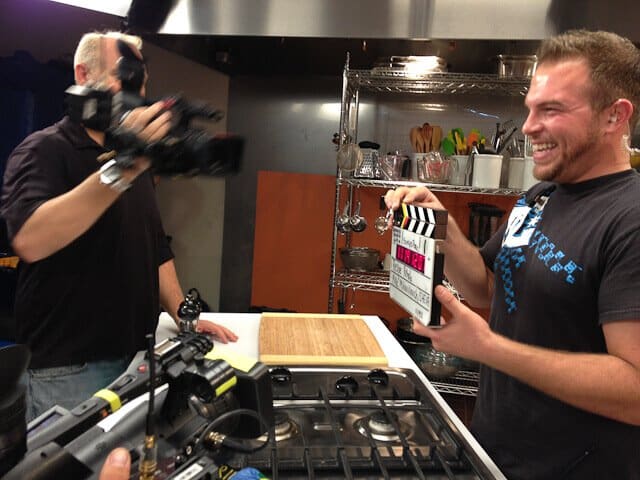 For episodes 1 & 2, I had my hair down. They changed my look for the last 2 episodes. 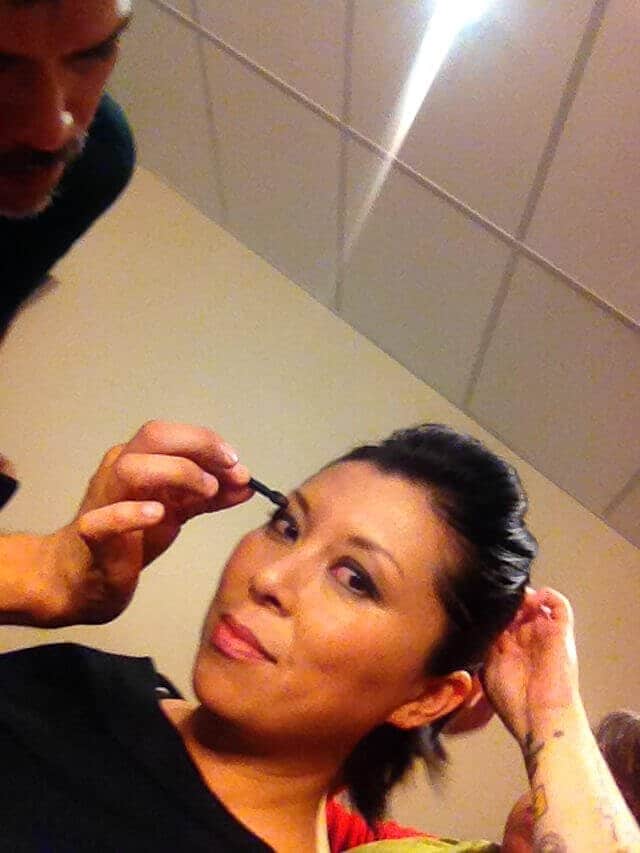 It turns out that Danny and I share the same agent and once upon a time (okay, earlier this year), when I was in NYC, our agent, Daniel, set up a dinner date for Danny and I to meet. Thirty minutes before dinner, Danny texted me and canceled. 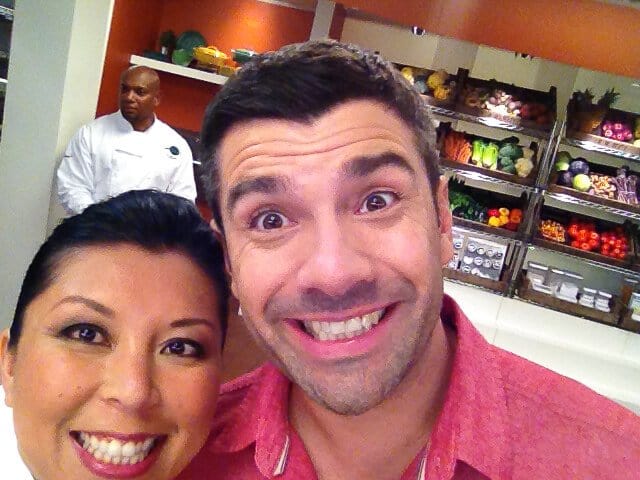 “I can’t believe that bastard cancelled on me!” I said, as I texted him back a short, curt “np” (no problem).

Danny didn’t remember this electronic encounter, “So good to meet you Jaden! I’ve been wanting to meet you!”

I smiled and said, “I bet you don’t remember that time when you dissed me for dinner!”

Danny turned red! But I laughed and we became instant friends 🙂

After 10 very long hours – nearly non-stop working, all 4 episodes wrapped up and I celebrated with: 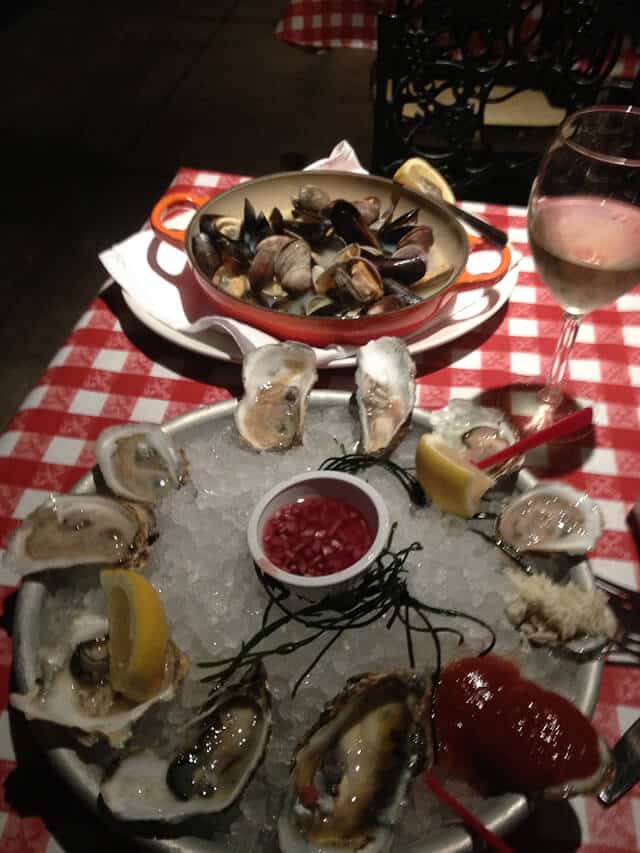 What a blast. A shoutout to my fellow chef contestants, Mareya Ibrihim and Calvin Harris! I don’t know when the episodes air – I totally forgot to ask – will post the dates when I find out!