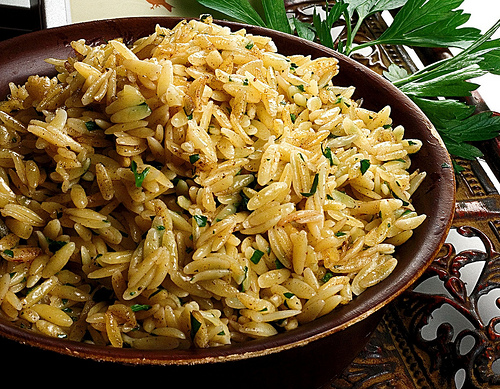 Guys! Gals! Androids! I have something SO AWESOME to share with you…

and I’m not gonna.

maybe in a couple of days.

I know, I’m a tease. But would you expect anything less from Steamy Kitchen?

In the meantime, I wanted to share a how decisions get made in the Steamy household.

How The Steamy Household Decides What to Eat

asks family: “What other side dish would you guys like for supper? We’re having

. We’ve been eating so much

lately that it’s nice for a change.How about some

in time for supper.* How about just plain

“Kids. We can’t have

for supper. Are you crazy? Pick something else.”

(SIGH). How can I satisfy all?

Orzo with Brown Butter and Cinnamon

Cook orzo in a 6- to 8-quart pot of boiling salted water until tender. While orzo cooks, melt butter in a small heavy skillet over moderately low heat, then simmer until golden brown with a nutty aroma, about 5 minutes. Remove skillet from heat, then stir in oil, cinnamon, and pepper. Drain orzo in a colander, then return to pot and add brown-butter mixture, scraping up any brown bits from bottom of skillet, and parsley. Toss until combined well and season with salt and a squeeze of lemon.

dough in the refrigerator, I surely could have gotten laid tonight by

by just seducing him with a beautiful loaf of

And now for the winners of the tsp spice giveaway!

Three winners will get some beautiful spices. Winners were randomly chosen by The Psychic Science nifty random number generator.

Drumroll….please…(sound of envelope being ripped open)

The first winner who is….on the next page.

Contestant #115, who will recieve tsp spices

And our next winner is….

Cumin, coriander, turmeric and a tiny pinch of cinnamon. Not only does it taste great – the color is beautiful too!

Hey Lisa and Claudia- you guys should get together and swap some spice packets, because my absolute favorite combo for tsp spices is Orange Zest and Ancho Chile!

The final winner is of the spice giveaway is…..

That is some fancy packaging for spices! I’m probably more of a Basil or Parsley person, but I on the last dish I made for my husband’s lunch, I used Ginger and Curry.

Do you have an orange tree? That photo just makes me want to suck the juice out of one of those orange slices!

Congrats winners! Email me directly at jaden@steamykitchen.com with your name, address and phone number for shipment!