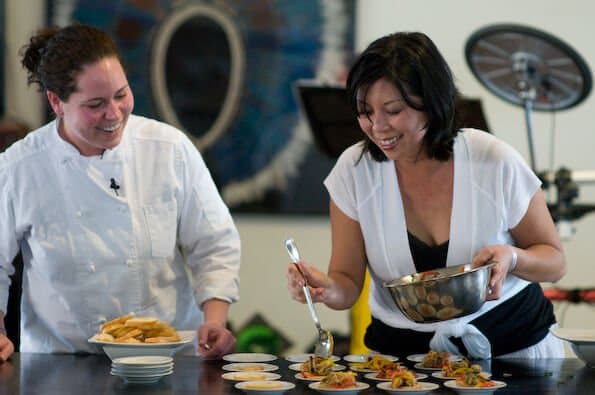 I am SO guilty of slacking on my recipe posting duties.

1) I’m still editing my cookbook. Working on my intro chapter (why is it that the intro chapter is the last chapter I wrote? Shouldn’t it be a “this !(*%&!_#@ cookbook is killin’ me!” chapter? I’m trying to be really peppy and nice in my tone, but my short attention span really doesn’t like it when I pull in something like a 18 month project. So, when you’re reading the Steamy Kitchen Cookbook and it sounds like I’m gritting my teeth while trying to be all light and happy – you know why.

2) Lots of TV segments! Each time I go on television, I have several hours of planning, prepping, shopping, cooking, driving, scripting in addition to the demo on TV. I love it! I think I was born to be on television.

3) Hosting a Food Bloggers Bash in the Bahamas with Club Med! Now that was seriously rockin’ fun.I know you’re all tired of reading about our adventure, but I will never tire of talking about my buddies David, Elise, Matt, Diane, Deb, Adam, Alex and Steve-Anna. Will I host another Bloggers Bash soon? You betcha. Though David is trying to convince us that Cannes in July is the place to be. I don’t care where…just as long as there’s a free bar. There’s even chatter that we may get together and hold a free giveaway for Club Med’s upcoming Food and Wine Festival in September at their Punta Cana (Domincan Republic) resort. And yes, for all you nosy folks, I’m Club Med North America’s freelance food writer, one of the best gigs I’ve ever had.

Enough of excuses. Let’s talk about Stephanie Izard, winner of last season’s Top Chef. Fabulouso woman indeed! Now, in the photos if it looks like I did all the cooking and she just looked pretty for the camera: 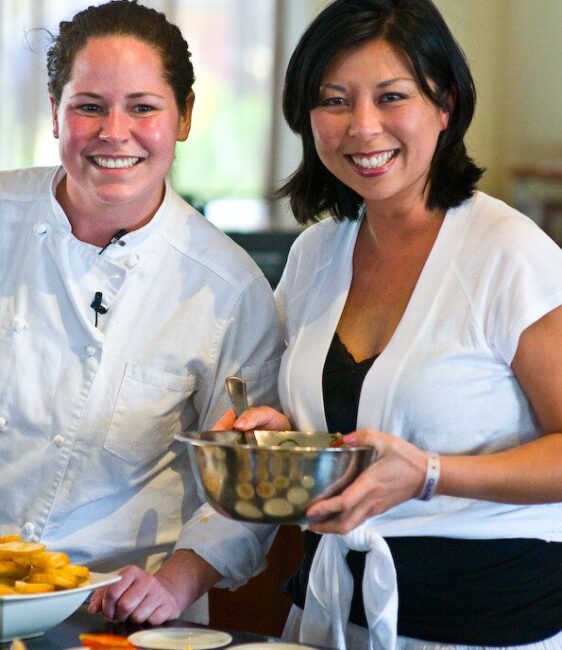 that’s SO NOT TRUE! Stephanie gave us a private cooking lesson and I just happened to jump in at the very last minute to help plate. 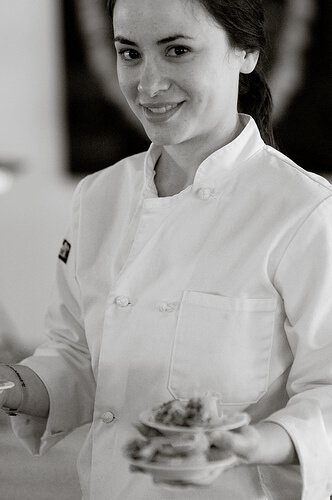 The the dish that Stephanie taught us is the Steamed Mussel and Fennel Escabeche! 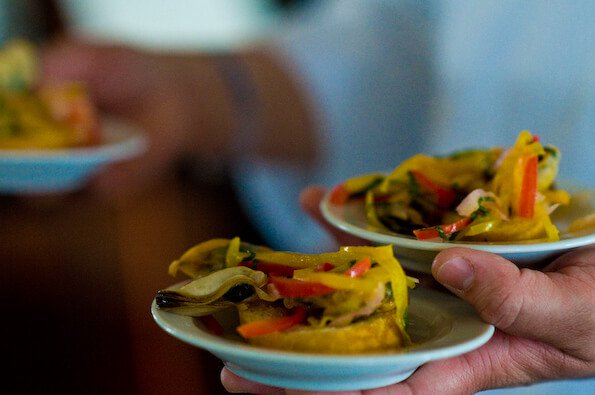 Escabeche might be spelled or pronounced differently depending on where you find it, but whether it’s referring to Puerto Rican, Jamaican, Spanish or Provencal cuisine, it’s generally the same thing: an acidic marinade. I’ve always liked escabeche on oilier fish like mackerel or on nice plump mussels, where the acidity is a great counter balance.

Heat a tablespoon of olive oil over medium-high heat in a large saucepot, add onion and garlic and sweat for two minutes. Add mussels, stir to coat, season with salt and pepper.

Add wine and thyme, cover and let steam until the shells just open, which should take about three to five minutes, depending on the size of the mussels.

Once they cool, pull the mussels from their shells, discarding the shells and setting the mussels aside.

Heat the olive oil over medium heat, add the veggies and sauté, without browning, until they’re tender, which should take about three minutes. Add balsamic, white wine, sugar and season with salt and pepper. Cook for another minute or until the liquid is reduced until almost all of the liquid has evaporated. Pour the mixture over the mussels and transfer to the refrigerator, chilling it for at least an hour and no more than overnight.

Brush baguette slices with olive oil, sprinkle with salt then bake until just toasted. While they’re baking, pull the escabeche from the fridge to bring it up closer to room temp.

Once the bread slices are nice and toasted, place three on each plate and top with a small pile of the mussel escabeche then garnish with basil threads.

Tip of the Trade: How to Beard Mussels
Before cooking mussels, they have to be soaked, “bearded” (meaning you have to remove what’s technically called the byssal threads), and then cleaned. First, soak the mussels in clean water for about 15 minutes to loosen any sand stowaways. Next, grab hold of the beard (using a dry towel or even tweezers helps keep your grip on the slippery sucker) and give it a yank, pulling toward the hinged end of the mussel. (Pulling toward the opening end can kill the mussel.) Lastly, clean the shells and edge with an abrasive scrub pad under running water. Now you’re ready to cook. 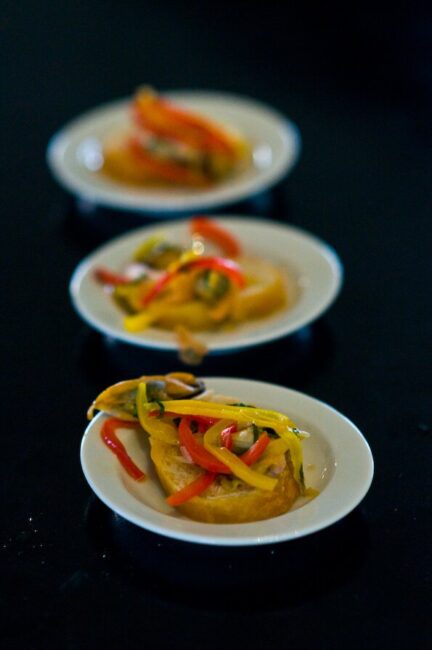 These photos were taken by Diane!