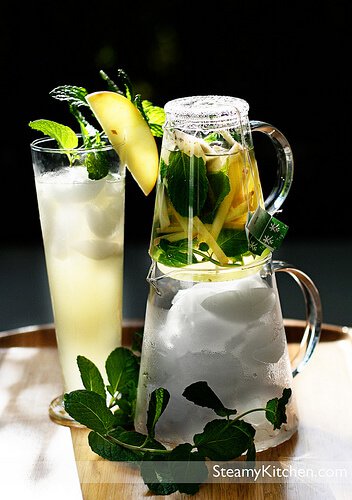 When I was little, my mom used to take a 2-quart pitcher, fill it with water, add a few tea bags and placed it in a sunny spot early in the day. My job was to chase the sun. As the sun moved throughout the day, I had to nudge that stupid pitcher.

Not a fun job, especially since back then as a kid, tea to me tasted like tree bark. What made the whole job worse was that our patio was covered with an open latticework canopy of two-by-fours. Great for playing a quick game of tic-tac-toe in the shade-produced lines, but you can imagine the frustration of making sun tea?

I’m sure many of you also used this highly inefficient, child-labor intensive method. Oooohhhh, it’s “green” you say, since the only energy you’re using is the sun’s rays? Well, it’s green alright, green as in nasty bacteria. Ok, well, the bacteria isn’t necessarily green, but you know what I mean. According to the Center for Disease Control, brewing tea in the sun for long periods of time actually encourages the growth of bacteria. The water in the jar may only heat up to 130F, not nearly hot enough to kill any bacteria that may be already lurking in your water, jar or tea leaves.

I don’t ever recall any of our houseguests getting sick from our sun-brewed iced tea, but hey, I’m not going to doubt the CDC. To borrow a famous quote from the shamed E.F. Hutton, “when CDC talks, people listen.”

So, I’ll give you two of my favorite methods of making iced tea. Because now that I’ve grown up and have reached that certain income bracket where I’m required to enjoy nasties like beer, cigars and coffee, I really do like iced tea.

The first method is cold brewed, and it’s so easy you can make it in your sleep! Before you head off to bed, fill a pitcher with 6 cups of cold water and add 3 tablespoons of loose leaf teas or 6 tea bags. Stick the pitcher in your refrigerator and when you wake up, it’s ready to be served over ice. According to The Simple Leaf, this method produces a “fool-proof, crystal clear iced tea.”

Easy enough, but sometimes, you don’t have the smarts to remember to do this before you go to sleep. I’m not great at predicting the next day’s food or drink urges when I’m yawning and clawing for my comfy mattress, since most of my urges seem occur pretty darn spontaneously. In the moments where I want iced tea NOW, I brew a batch of triple strength tea and pour that over a pitcher full of ice.

My latest obsession is a hand-blown, heat-resistant glass pitcher from Tea Forte, called Tea Over Ice. While pricey ($40.00) it’s been getting a lot of use in my home because it makes the perfect vessel for 5-minute home-made infused iced teas.

The recipe below is for Apple Ginger Mint, but feel free to experiment with your own favorite herbs, spices and fruits like: blackberry-basil iced tea, peachy-cardamom iced tea or apple-cinnamon iced tea. Just make sure you cut up or smash the fruit to release all of its flavors. Add fruit juice for that extra kick. Speaking of kick, read my note at the end of the recipe!

Combine tea bags, ginger, apple and mint in a tea pot. Fill with boiling hot water and steep for 5 minutes. Pour and strain into ice-filled pitcher. Add apple cider and honey as desired. Fill individual glasses with ice and serve. 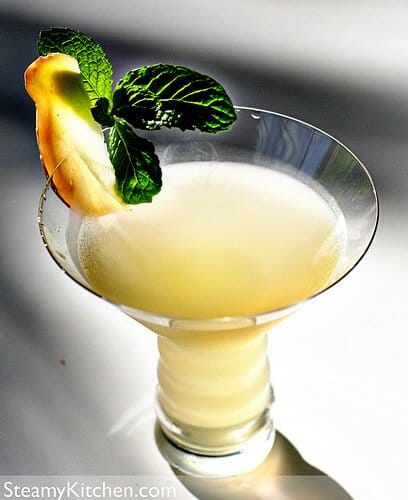