Last week, I gave away an all expenses paid trip to Hollywood to participate in the Julie and Julia movie screening. Because I couldn’t go, I gave away an opportunity for one of you to go in my place and be the Steamy Kitchen correspondent. Well that lucky winner was Kelly of Barbaric Gulp!

Kelly wined, dined and schmooooozed in Hollywood – and here’s her report below. But of course, I had to muddle with the photos and provide my commentary as well! Anything suspiciously in RED is from me.

WOW! What a whirlwind of a week I’ve had! My trip to Los Angeles was amazing. (Thanks AGAIN to Jaden for offering the trip, Kamran for selecting my comment in the top 10, & Sony Pictures for their hospitality!)

The big event for food and film bloggers on Thursday began with a screening of the Julie & Julia movie. Based on Julia Child’s memoir My Life in France and Julie Powell’s blog-turned-book, Julie and Julia: 365 Days, 524 Recipes, 1 Tiny Apartment Kitchen, the film juxtaposes the story of Julia learning to cook at Le Cordon Bleu in Paris and writing her tome Mastering the Art of French Cooking with Julie’s story of cooking all 524 recipes in Julia’s masterpiece in just one year. I’m not supposed to discuss details of the film just yet (I’ll post a review the beginning of August), but I will say that I thought it was very good! As you can tell from the trailer, Meryl Streep as Julia Child is dead-on. 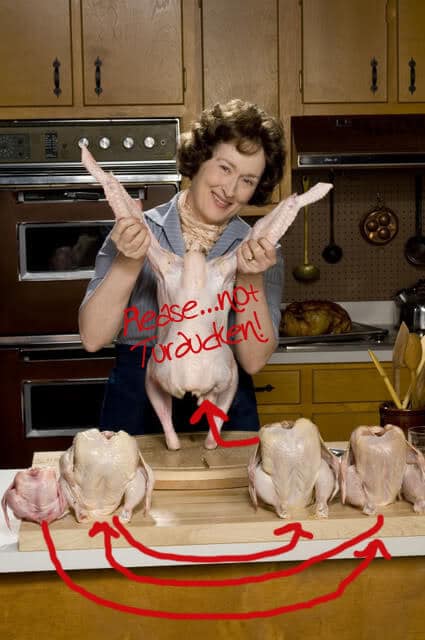 After the movie, we watched a cooking demonstration by Chef Brian Malarkey (executive chef of The Oceanaire Seafood Room in San Diego and Top Chef 3 finalist) and Julie Powell. Brian and Julie put together a Boeuf Bourguignon and a chocolate cream pie, dishes from the film. During their playful banter, Brian asked Julie about cooking. Julie admitted that she was a “masocist” who “likes submitting to someone else’s recipes.” 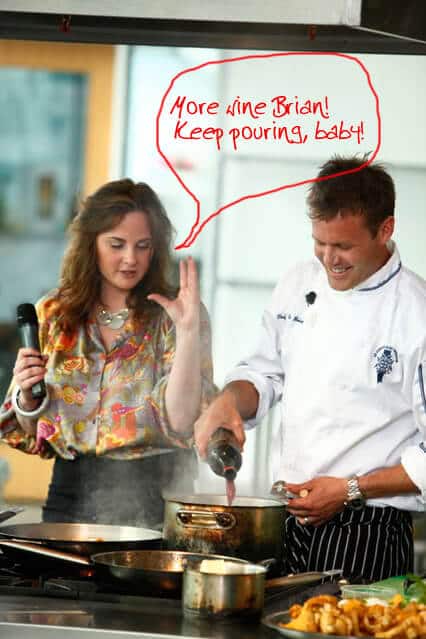 Then, we were introduced to Susan Spungen, a culinary consultant who worked as the food stylist on the film. Susan explained that all of the food you see on scene is real food (though, they did not really kill any lobsters on screen) including the burnt Boeuf Bourguignon, and apparently it’s real good food as well. She tried to stay true to Julia Child’s recipes (except for the apple tart tatin, which was her own recipe), making only minor changes when needed. For example, for an onion soup eating scene the script called for the cheese to “extend from the soup to her lips,” (interestingly, French onion soup was Julia Child’s last meal)… 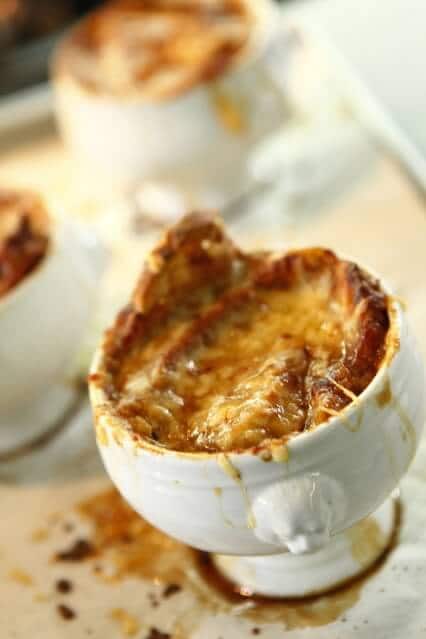 Susan said that while “boning a duck may have struck fear in the heart of Julie Powell,” accomplishing the stringy cheese feat scared her. She was able to achieve ultimate stringiness by adding mozzarella to the dish. Susan also demonstrated how she prepared the soup for the film. She finished each bowl ahead of time, let it cool, then remelted the cheese on set using an electric paint remover. You can see an exclusive clip of that scene on Hollywood.com; it’s pretty incredible, and I even wondered if it was real cheese! 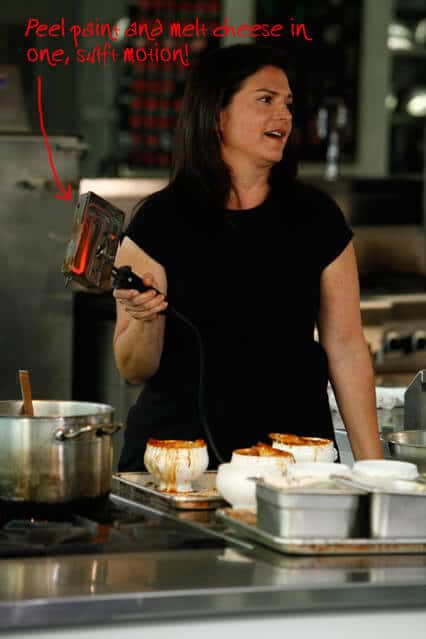 Besides preparing all of the food for the film, Susan worked with the actors before and during the cooking scenes. She taught Meryl Streep how to flip an omelet, and everyone on set learned how to bone a duck. (Another interesting fact: When you see Adams boning a duck on screen, those are Susan’s hands doing the boning in the close-ups.)

Food on film was the subject of an interview with author Julie Powell and actor Chris Messina, who plays Julie’s husband Eric. Chris said that the food was very good, but it was difficult to eat so much of it take after take. After eating seven or eight bruschettas, he had to put a bucket next to him. But, Chris does a fabulous job of eating with gusto in the film. It will make you hungry. 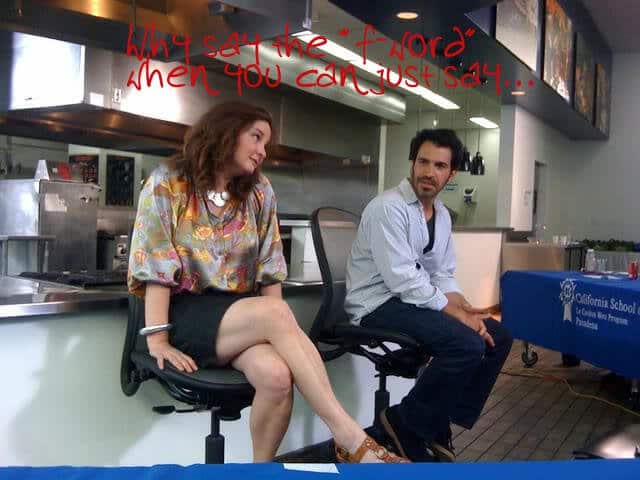 The highlight of the day for me was meeting Julie Powell. I’ve said earlier that her book inspired me to start trying new recipes and blogging about it. I asked her what changes were made to her story for the film that she didn’t like. She said that she is portrayed as a “sweetened version” of herself for the PG-13 rating. She didn’t like that her character says the phrase “the F-word” because in real life she would never have said that; she would just say the word. She also didn’t like that her character shopped at Dean & DeLuca, another thing she would never do. (She calls the store “Grocery of the Antichrist” on her original blog.) Nevertheless, she seems genuinely thrilled with the film. Her next book, Cleaving: A Story of Marriage, Meat, and Obsession, will be available in December. It’s about her learning the art of butchery. 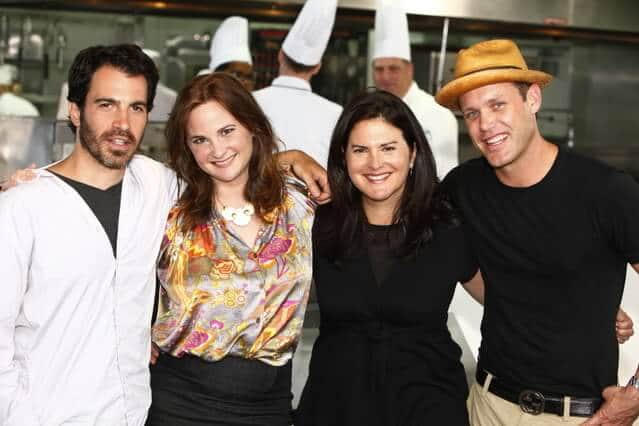 After the interviews, we were treated to a meal of Boeuf Bourguignon, watercress soup, and chocolate cream pie…all dishes that were featured in the film. 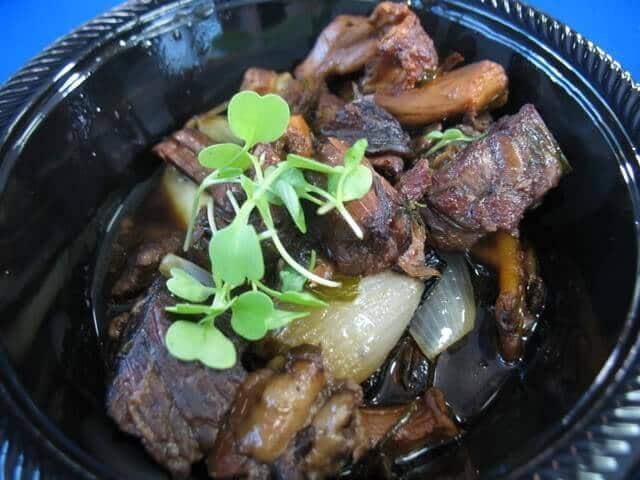 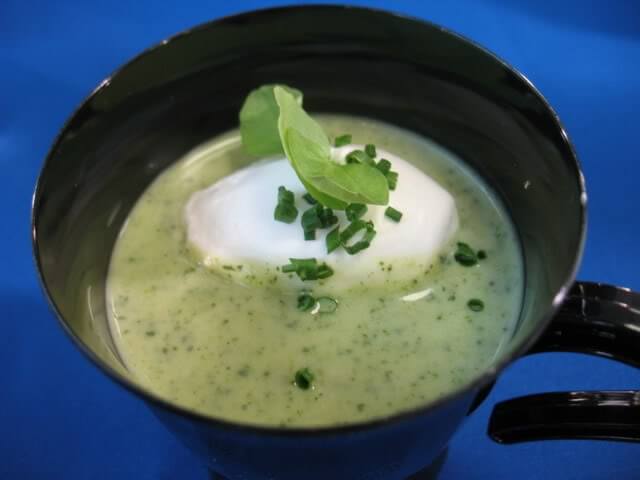 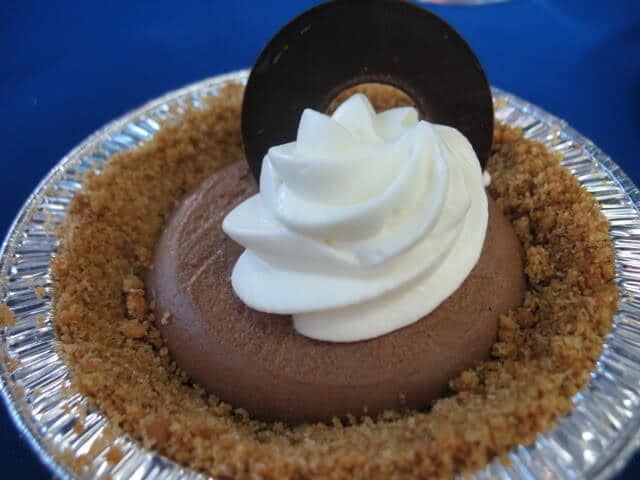 If you’ve never made Boeuf Bourguignon, I suggest you do so! It’s a slow-cooked stew of tender beef, onions, carrots, mushrooms, and red wine. The chilled watercress soup, a variation of a classic vichyssoise (cold leek and potato soup), is perfect for a warm summer evening. Both recipes can be found in Mastering the Art of French Cooking.

Don’t have a copy of Julia’s cookbook? I’m giving one away, along with a copy of Powell’s novel, on my blog!