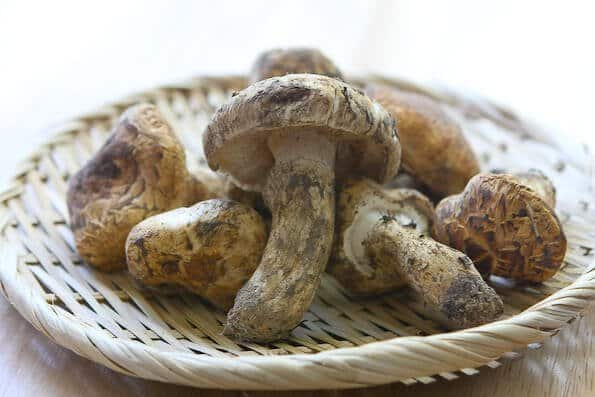 One of my favorite cooking shows of all time is the original Iron Chef. No, not the modern version that plays over and over on Food Network right now, but the one taped in Japan with the silly English dubbing that always cracks me up. The episode that I drooled most over was “Battle Matsutake.” Matsutake Tempura?! Oh hello lover!

So since that episode, I’ve been pining for Matsutake mushrooms. I kept hearing that in Japan, it’s a seasonal, rare, expensive thing….so I just sorta passed it up as, “okay, one day…” type of food.

And a couple of weeks ago I found out that Matsutake mushrooms are harvested here in the Pacific Northwest (okay, not really “here” as I’m in Florida, but I mean here as in American soil!) and this year is one of abundance. My good friend Dave from Earthy sent me an email when they first started arriving, and I almost canceled the rest of my travel plans to come home so I could play with the ‘shrooms.

But how to cook?

Marc of No Recipes and Stephan of Zen Can Cook came to the rescue with ideas and recipes. I had dinner with both of them a few months ago in NYC, but we don’t have a photo to prove it.

Because we were too damn busy eating, laughing and stuffing our faces at dinner. Oh and drinking lots too. No wonder!

So, if you’re lucky enough to get your hands on a few Matsutake mushrooms, remember to keep the recipe simple. The mushroom is so fragrant and earthy that you don’t want manipulate it too much. Keep it simple, with few good quality ingredients and enjoy its natural aroma and taste.

What is Matsutake Mushroom?

Fall is the season of Matsutake mushrooms. In Japan, it’s a highly prized mushroom, perfect specimens selling for as much as $250 for 6 small Matsutake mushrooms! I compare it to truffles – the Matsutake has a penetrating, deep earthy aroma. It’s texture is thick, meaty and hearty.

The Matsutake grows only under pine trees, and I’ve heard that the never grow in the same place twice. How frustrating for mushroom hunters, eh? American Matsutake is a little different from the Japanese species, but just as fragrant and delicious.

Hsiao-Ching Chou wrote, “In that regard, the matsutake resembles the truffle, which lends its perfume to any preparation it encounters. A broth with several slices of a pine mushroom would be served in a lidded bowl or pot, for example, so that the scent of earthy pine with a tinge of cinnamon swirls within the container until it is finally released.”

Hurry! Matsutake mushrooms are only available September through November!

How to make Matsutake Dobin Mushi

First, clean your mushroom with a damp cloth, wiping off as much dirt as possible. Cut off the tough bottom nub of the mushroom. Use a paring knife, turn the knife around so that you’re using the upper dull edge, and scrape off the thin outer layer on the stem. 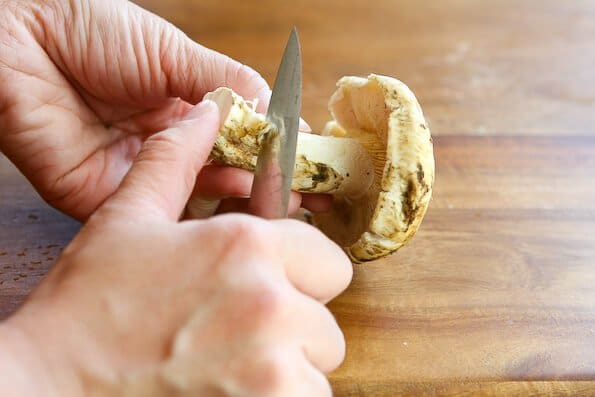 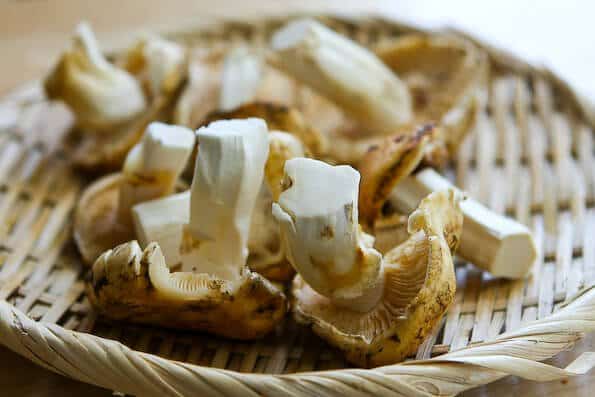 To make dashi, use large bonito flakes or katsuobushi. They come in a big package at the Asian market. Look for the big flakes. The little flakes are for garnishing. Big flakes should be the size of a cornflake. 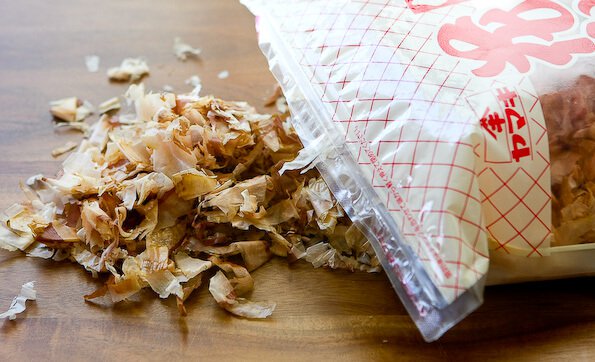 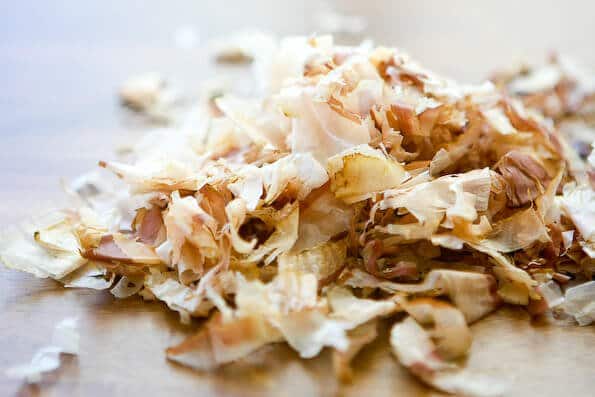 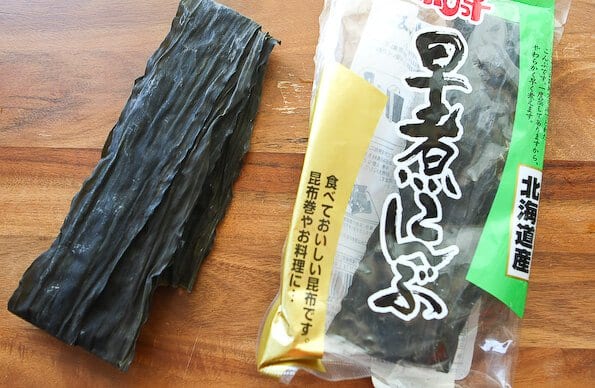 They usually come long, folded and then dried. You’ll only need 6-inches and just a single layer, so break it apart. 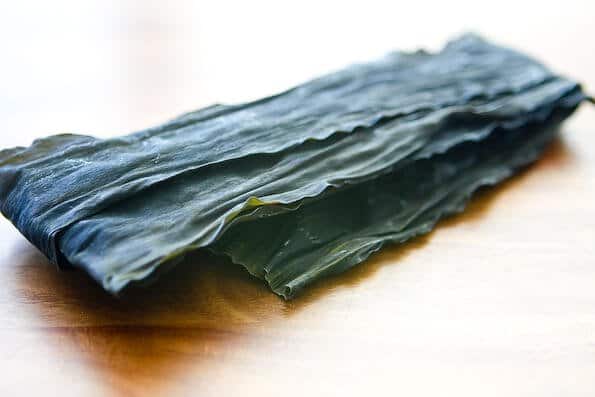 Do not soak the kelp or even rinse it. Just take a damp cloth and wipe it down to clean any dirt off the seaweed. Add the kelp to water and turn the heat to medium-low. 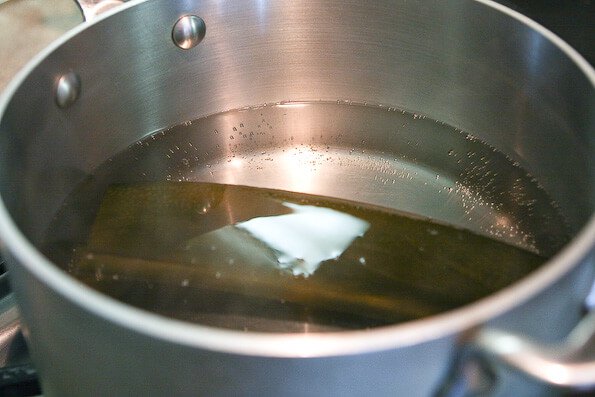 Just before it comes to a boil, add two big handfuls of bonito flakes, stir and turn off the heat immediately. 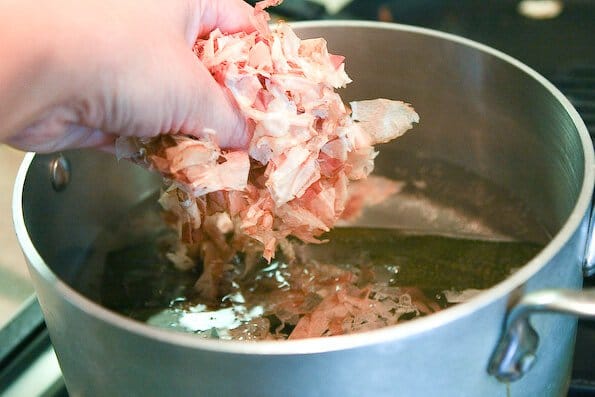 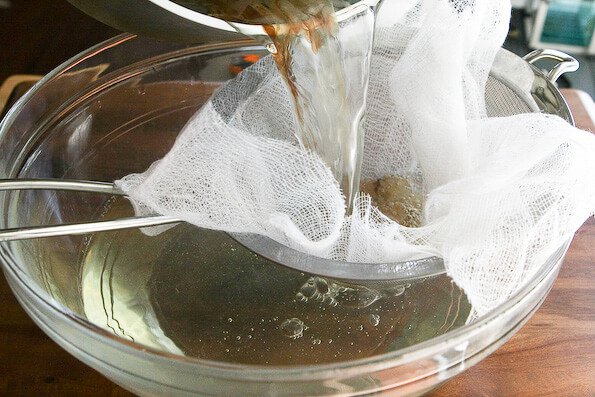 The kombu is still good! Don’t throw it away…. 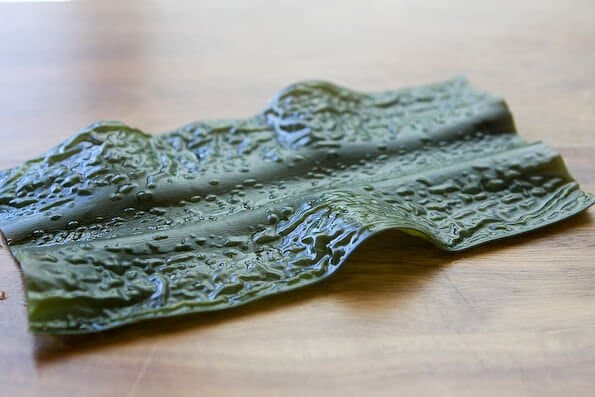 Just rinse and pat dry. Let dry on your counter top and then when the kelp is completely dry, store back in your pantry. You can reuse. 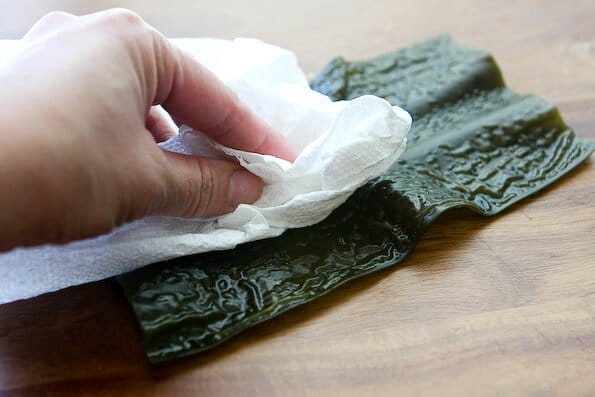 Now it’s time to make the dobin mushi. Ladle the strained dashi into a teapot. 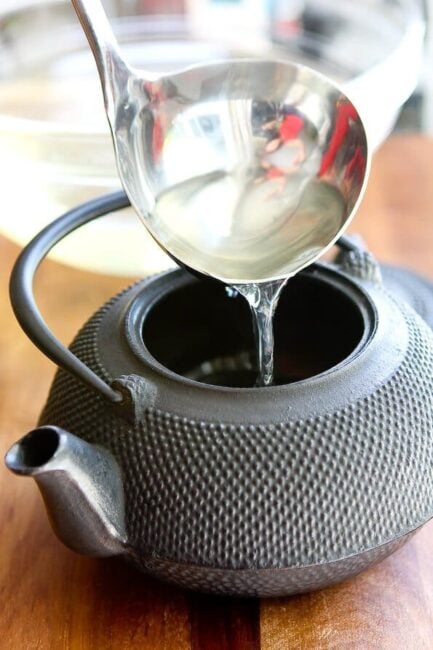 Next, add the ingredients. Today, I had sliced fish, sliced carrots and sliced Matsutake mushrooms. I have also make dobin mushi with chicken, shrimp and ginko nuts. What you add to your dobin mushi is up to you. Below, I have a list of links to dobin mushi recipes that you can look at. 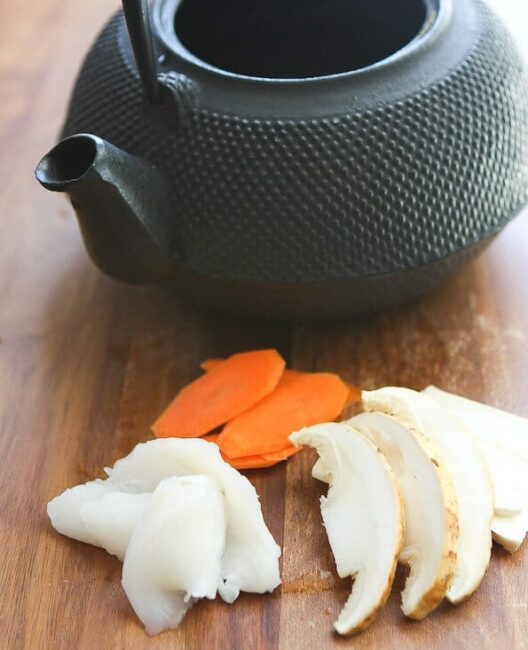 Place all ingredients into the teapot. Also add Japanese sake, a touch of soy sauce and just a sliver of lime peel. 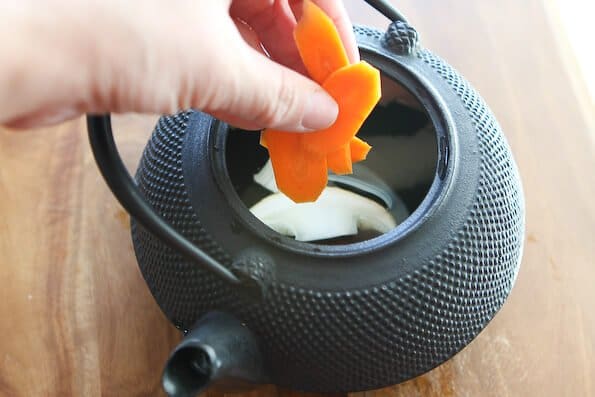 Dobin mushi is steamed, not boiled directly on a flame. I have a wok here and have inserted a steamer stand. Bring water to a boil. 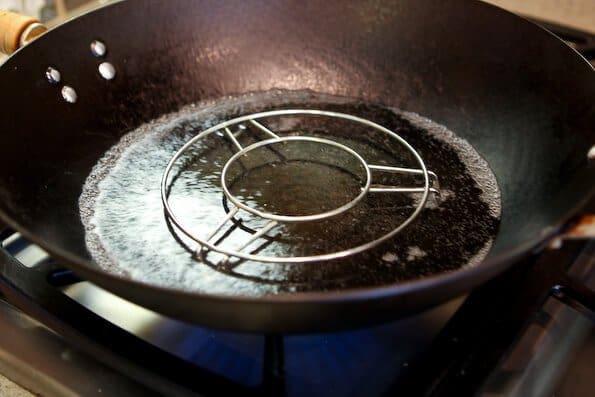 Place the teapot on the steamer rack. 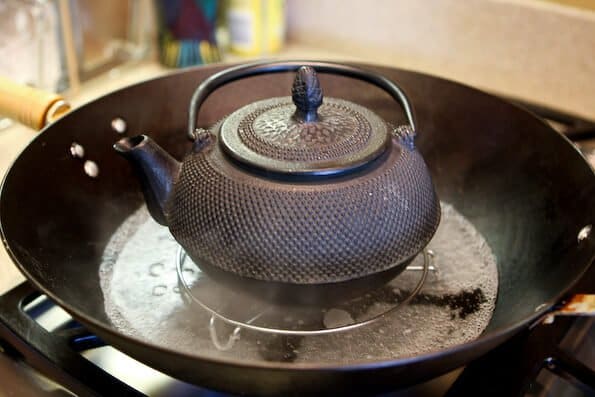 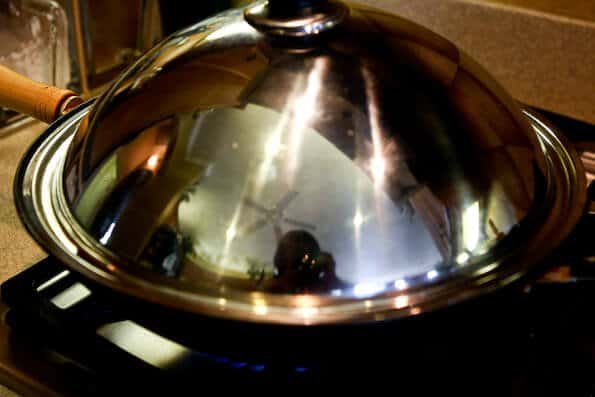 Pour the aromatic broth into a teacup. 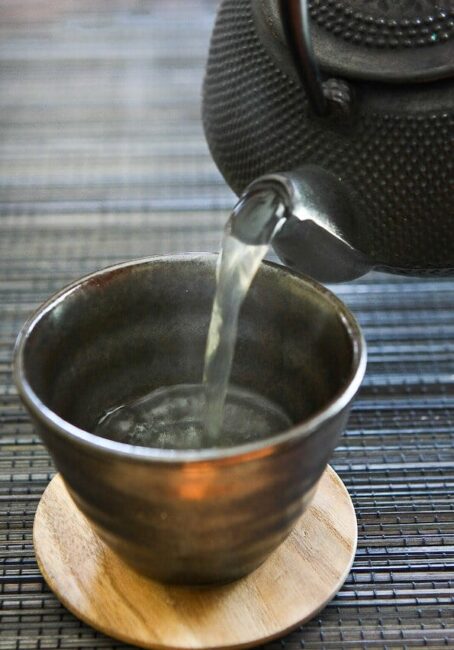 And then enjoy the goodies inside the pot. 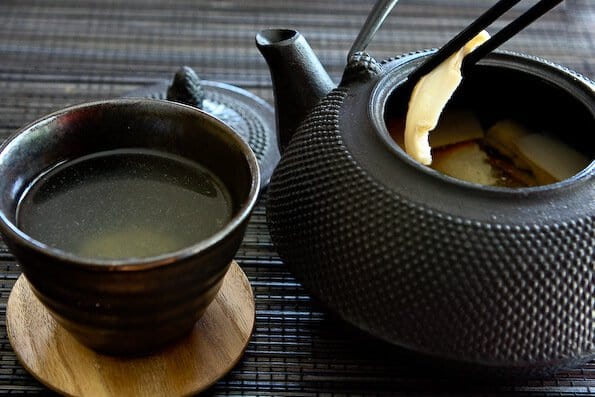 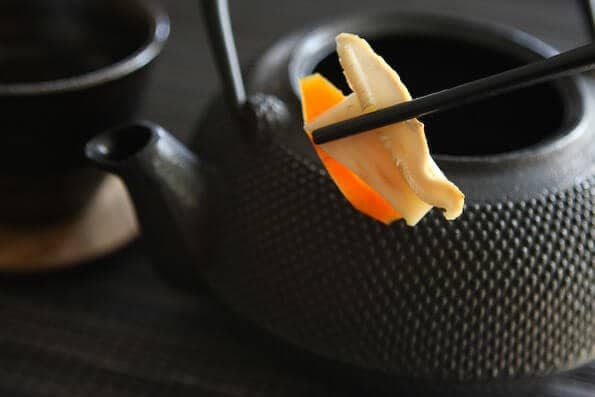 This dish is all about the mushroom. Keep the ingredients simple and light to showcase the Matsutake! Matsutake mushrooms provided by Earthy.com

serves 2 as part of multi-course meal

1. Make the dashi: Place the kelp into a pot with the water. Let soak for 10 minutes. Turn the heat to low. When the water starts quivering, remove the kelp, add in the bonito flakes, stir and turn off the heat. (Do not let boil) Let sit until bonito flakes sink to the bottom. Strain (don’t squeeze the bonito flakes) and reserve the dashi stock.

2. Clean the Matsutake mushrooms by using a damp terry cloth to wipe the dirt off the mushrooms. Use the back of a paring knife to scrape the thin, outer layer of the stem off. Cut the tough bottom of the mushroom off and discard. Ladle the dashi into your teapot, add in the remaining ingredients.

3. Prepare your steamer as shown in the photos or directions above. Cover and steam for 7 minutes (longer if you are using chicken) on medium-low heat. Serve immediately.

A Recipe to Savor the Autumn: Kinoko Dobin Mushi