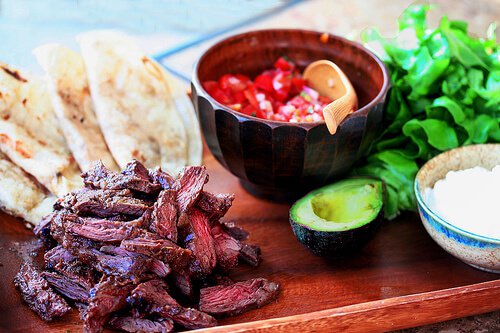 Note: I was not responsible for slicing the skirt steak…that would be another person who resides at the Steamy household. We shall keep him nameless. Anyways, the skirt steak was cut incorrectly – they should have been sliced perpendicular or ACROSS the grain. Cutting it WITH the grain, like above, makes the skirt steak chewy.

Practically every other shop in San Fran’s Mission District features grilled steak tacos, and often on Sundays, we’d sleep in until 10am and lazily work our way towards the corner of Mission and 25th to La Taqueria for an early lunch. Of course, we’d always arrive the exact same time as the caravans of hungry families just getting out of church. Since the city boasts 423,468 automobiles and only 29 parking spots, it was a fierce game of strategy.

Approaching 3 miles from your destination, you start scanning in a steady, sweeping motion: left-center-right-center-left. No, you aren’t looking for parking spots – that’s totally hopeless and you’d just waste your eye-energy. You’re observing for people walking who have a high probability of returning to their cars to leave the area. Here’s the key – you’re looking for someone who is strolling slooooowwllly, belt buckle loosened, tell-tale lunch drippings on shirt and a satiated, dreamy look on their face. Of course they are dawdling  – they are relishing, savoring in a temporary moment of superhuman power: “I have a parking spot that YOU GUYS ALL WANT.”

So herein starts the game. Five cars follow this person, each taking a different route trying to guess which car is hers. “Look, she’s wearing Manolo pumps from two seasons ago – that Mercedes SL600 is so not her car. Go for the Audi A3 with the big dent! Whoops….she’s heading left! Oh- here she is….turn here! She stopped! SLOW DOWN!! Wait – she’s walking between cars to the next isle. HURRRY! GO!!”  At this moment, all of the contestants reposition and are jockeying to be as close as they can to her without inflicting bodily injury to said target. Because if you get too close and hit the mark, you’re slapped with a 15-yard penalty and a “Dumb-Ass” bumper sticker. Not cool.

Despite all the trouble, the tacos at La Taqueria are worth every single scratch, dent, ticket and tow. After finally scoring a parking spot, you’d proceed on foot, guided by the aroma of seared steak with hints of cumin and coriander. As you got closer to the door, you’ll hear the cooks throwing the meat on the flaming grill, each time landing with a shocking sizzle. Finally, the prize,”dos carne asada tacos con queso y aguacate por favor”

I’m not even going to try replicate those tacos exactly- because that would just cheapen my memories of hoping, fighting, praying wishing, waiting 3 hours to park for 2 tacos each. But, I’ve created a recipe that uses the same cut of meat (skirt steak) and the same cooking technique (grilling) and introduced a spicy, smoky flavor with a chipotle con adobo marinade.

Chipotle peppers are red jalapeños which are ripened, dried and smoked. On the richter scale of chili heat, they are considered medium. Canned with an adobo sauce, which is a mixture of spices, vinegar, garlic, tomato sauce and other chilies, the concoction becomes mighty marinade for steak tacos. If you’ve never used chipotle con adobo before, make the marinade with a single pepper first, taste and then add additional if you like more heat. The canned product can be found at any grocer in the Latin foods section. 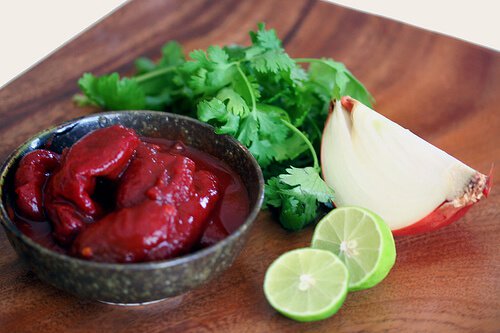 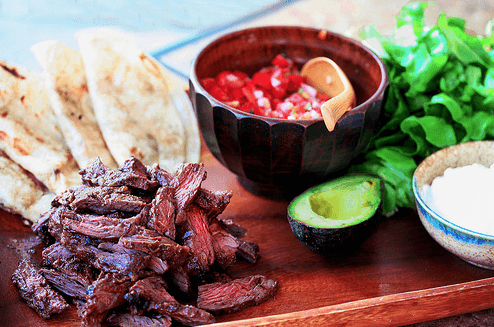 I throw the corn tortillas directly on the grill 30 seconds, flip, add cheese, grill 30 seconds, remove. This melts the cheese oh-so-perfectly and chars the tortilla edges just a tiny bit for that crunch. Heating it also takes away some of the "rawness" that corn tortillas have when they are straight out of the bag.
Tried this recipe?Let us know how it was! 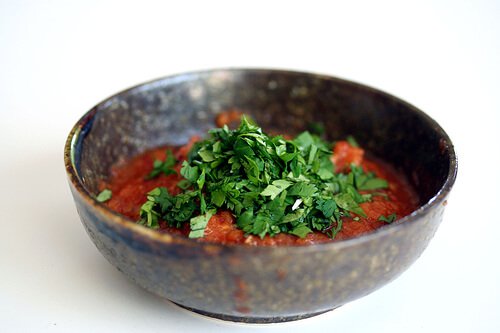