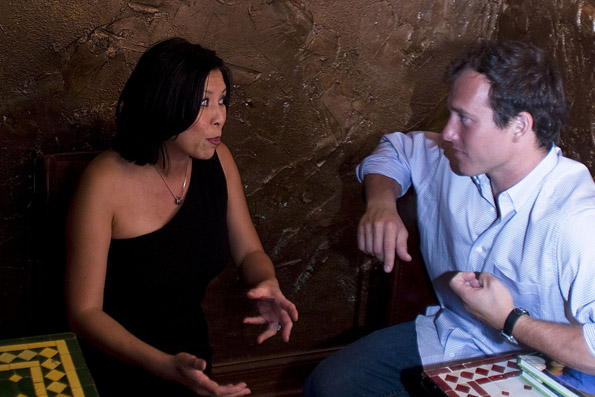 So, what do you say to break the ice when you meet one of People Magazine’s 50 Hottest Bachelors?

A few nights ago, I had the pleasure of interviewing Dave Lieberman, who was showcasing tapas dishes using beautiful olive oil from Spain. My friends, the Culinary Sherpas did the food styling for the event and for the media. 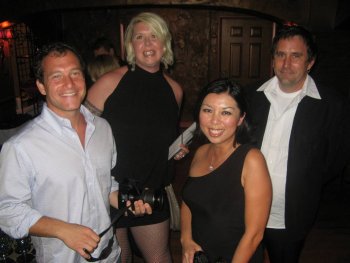 Dave, me, Michelle and Greg of the Culilnary Sherpas who did the awesome food styling.

Here’s my 7 minute interview with Dave, and I think I embarrassed the curls outta his hair and made him squirm like a monkey in heat! (around the 4:40 mark)

And I have a feeling that Dave’s going to totally get me back for that embarrasing question!!!

Recipes courtesy of Dave Lieberman and Olive Oil from Spain

There are a ton more recipes at Olive Oil from Spain‘s website. 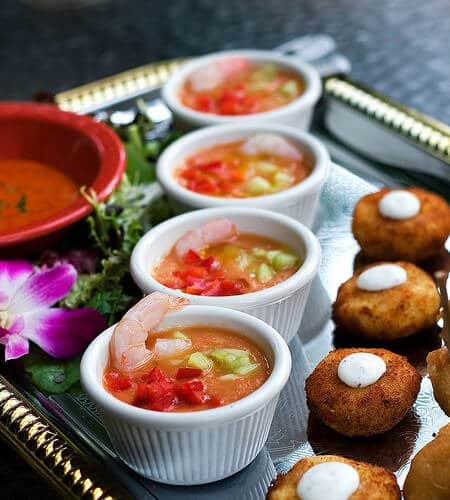 serves 8-10 as part of Tapas party

For the garnish:
¼ cup each finely diced red bell pepper and cucumber
Olive Oil from Spain

To make shrimp:
Combine water, lemon, thyme, bay leaf, salt and peppercorns in a large pot. Bring to a boil, simmer for 10 minutes. Remove and discard lemon and seasonings. Add shrimp to pot and poach for 2 to 3 minutes, or until cooked through. Using a slotted spoon, transfer shrimp to a large bowl of ice water. Drain and refrigerate shrimp until ready to serve.

To make gazpacho:
Soak the bread in water for 10 minutes; drain and squeeze out excess water. Set aside. In a food processor puree the tomatoes, cucumber, onion, peppers, garlic and chili. Add the bread, vinegar, Olive Oil from Spain, salt and pepper and process until smooth. Chill until ready to serve.

To serve:
Place a couple shrimp in a shallow bowl; pour gazpacho around. Sprinkle with diced red pepper and cucumber. Drizzle with olive oil.

To make the potatoes:
In a small saucepan combine Olive Oil from Spain and garlic. Cook over low heat for 5 minutes. Remove from heat and cool. When cool discard the garlic.

Boil potatoes until fork tender; drain. Return potatoes to pot to dry. Mash potatoes leaving some chunks. Stir in 3 tablespoons garlic, Olive Oil from Spain, milk and cheese; season with salt and pepper. When cool enough to handle, form potatoes into small round cakes, about 2 inches in diameter. In a small bowl, beat egg with 1 tablespoon water. Dip each cake into egg mixture, then into breadcrumbs. Refrigerate at least ½ hour or overnight.

Pour enough light Olive Oil from Spain into a heavy skillet to cover the bottom with 1/4″of oil; set over medium heat. When the oil is hot pan-fry potato cakes until golden brown, 1 – 2 minutes on each side. Drain on paper towels. Top each potato cake with a dollop of herb cream and serve warm.

To make the herb cream:
In a blender puree the Olive Oil from Spain, basil, and parsley. Add the remaining ingredients and blend until just mixed. Refrigerate until ready to use. 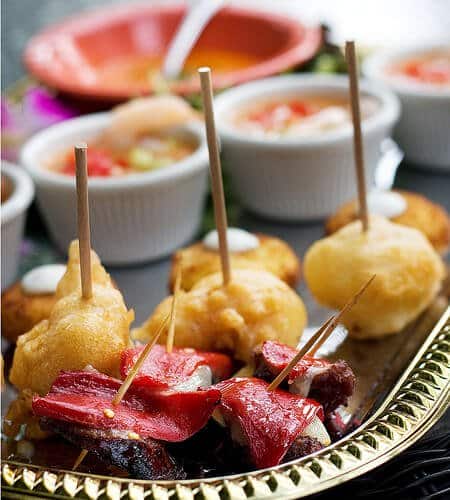 Prick fresh chorizo sausages in several placdes with the point of a knife. Grill sausages over medium high heat until medium rare, about 3 minutes on each side. Set aside to drain on a paper towel. When sausages are cool enough to handle, slice diagonally into 1/2 inch thick pieces.

Add olive oil to saute pan and sear chorizo slices on both sides until well browned and cooked thorugh, 1-2 minutes for each side. Drain on paper towels.

Using a vegetable peeler, shave cheese into very thin pieces. Top each piece of chorizo with a shaving of cheese and a square piece of piquillo pepper. Skewer with a toothpick. Drizzle with olive oil and serve.

Dave signed a cookbook, just for you!

Untitled from Jaden Hair on Vimeo.

Thanks for entering, the winner for the Dave Lieberman cookbook has been announced!

To enter the random drawing, just comment below and tell me what was my pickup line that I said to Dave Lieberman when first met him?

And while this is Steamy Kitchen, please do keep it clean.

The random drawing is just that. TOTALLY RANDOM. So no, you don’t have to guess the right answer or anything to win, although, if you guess correctly, you might just win a little something extra from me.

You have until September 20th! 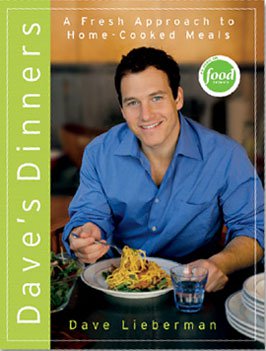