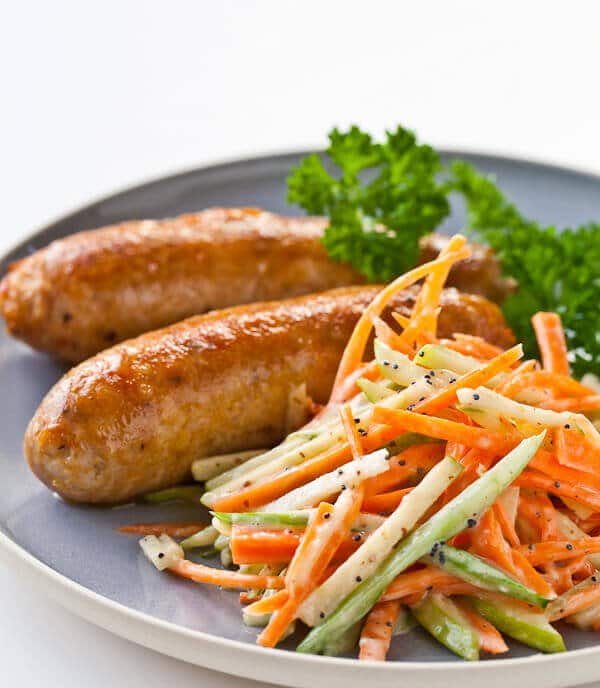 This weekend was unusually hot, which for 99.5% of the population is a good thing. But I just spent an undisclosed sum of money on clothing, shoes and accessories to keep my booty warm for my trip to NYC, and I’m just not quite done with justifying my purchases just yet. The wool scarf, earmuffs and gloves still have another 40 or so uses out of them this season, so that I can finally feel good and say, “wow, I’ve gotten my money’s worth!”

Unfortunately, the 85F weather just wasn’t agreeing with my neurotic need to wring every penny’s worth out of the earmuffs and I ended up giving into flip flops and capris — cooking warmer weather foods like this Chicken Sausage with Apple Slaw. 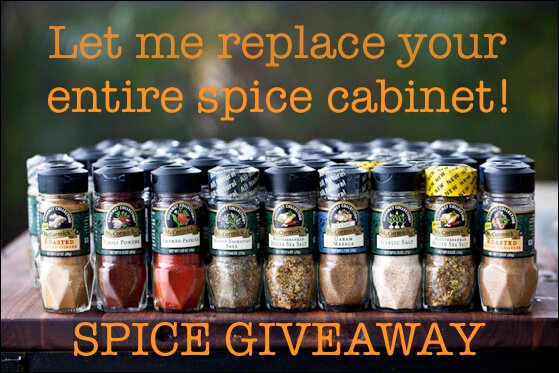 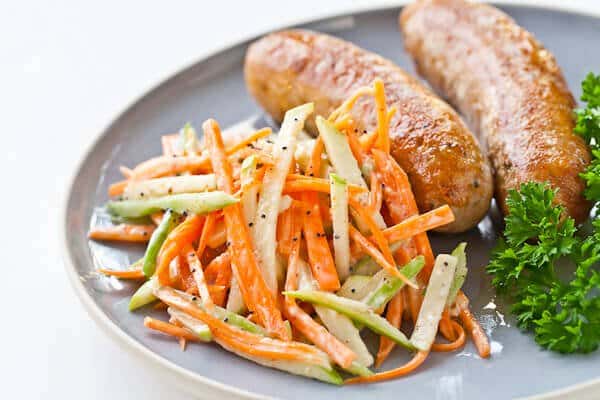 For slaws, the secret is in the cut. I try to get all my vegetables the same shape and size, so that when you take a bite, you’re not dealing with stringy this, knobby that and chunky others.

For celery, I like to run a vegetable peeler lightly over, just to remove some of the stringy bits which get stuck in your teeth. 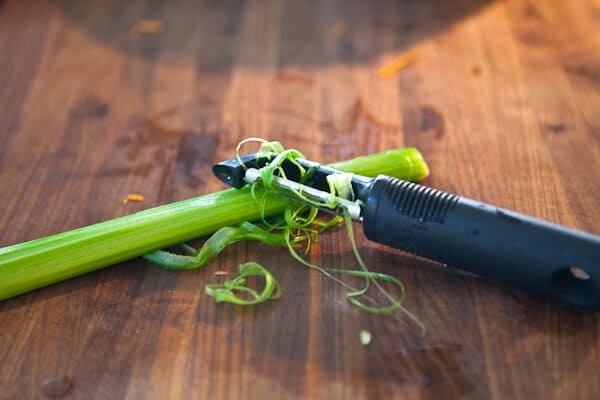 Then I’ll cut into thin slices, but at a very extreme diagonal to get longer pieces. Cutting them diagonal also keeps the celery more tender/less stringy, as we’re cutting across the “grain”. If you cut your celery like you do for celery sticks, you’ll notice much more stringiness. 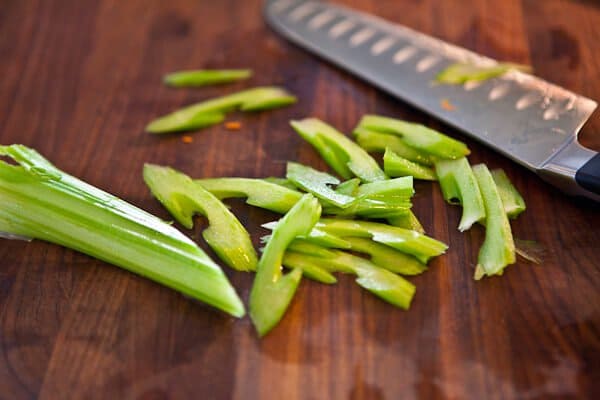 Then I just line the celery up lengthwise and run my knife one more time to make julienne strips. 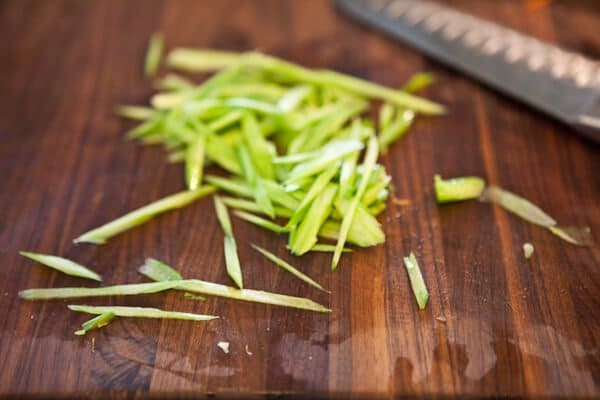 For apples, I cut all the fruit off of each side, discarding the core. 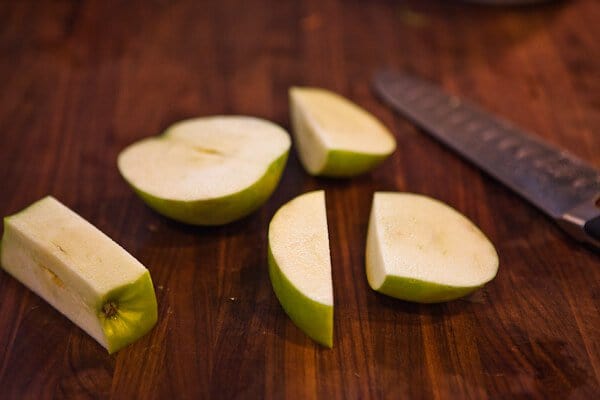 Then I thinly slice. 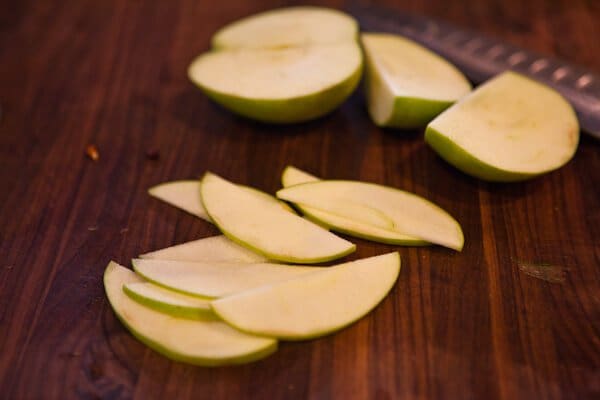 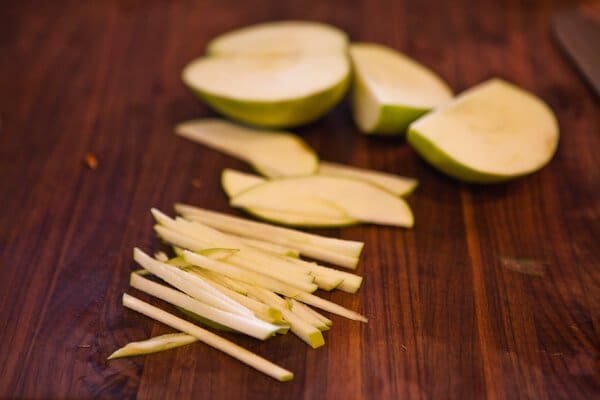 For carrots, you can purchase matchstick carrots, or julienne them yourself — but only do this if you have a very sharp chef’s knife. Skinny, round hard carrots are difficult to julienne with a dull knife. 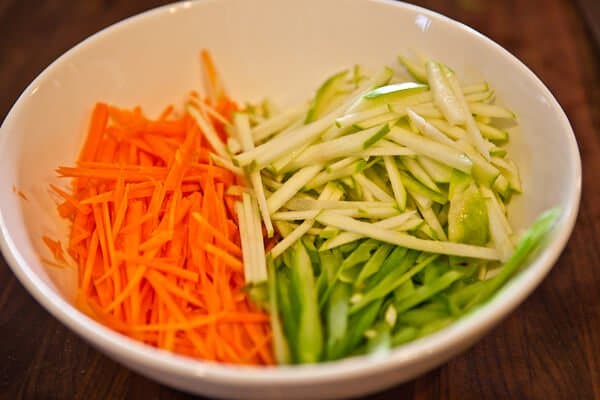 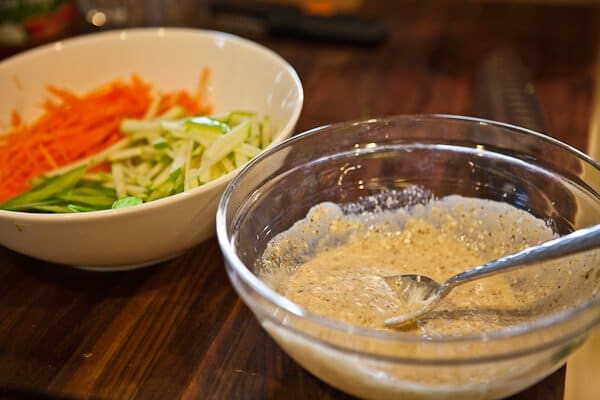 What make this slaw over the top is the addition of poppy seeds. 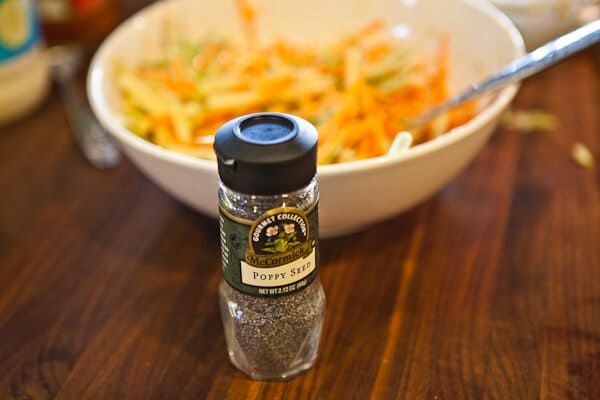 What is Poppy Seed?

Although the poppy plant itself is an infamous source of opium, the tiny, dried seeds of the annual Papaver somniferum,
which translates as “sleep bearing,” have no narcotic properties. The
plants produce showy, colorful flowers and richly colored slate-blue
seeds, with a nutty flavor. Poppy seeds are available in the whole form.

Sprinkled on baked goods from breadsticks to cake, whisked into salad
dressings for fruit or greens, swirled into egg or potato dishes… the
many uses of poppy seeds are surprising and delicious. Toasted or not,
the tiny blue-black seeds figure prominently in Eastern European,
German, Indian and Turkish cuisines.

Indigenous to the Eastern Mediterranean, today’s poppy seeds most
often come from the Netherlands and Australia. The Dutch variety is
especially prized for its uniform slate-blue color.

Cultivated for more than 3,000 years, the deep red flower of the
poppy plant has long been a symbol of esteem for fallen warriors. In the
United States, the flowers are often used to commemorate Veterans Day. 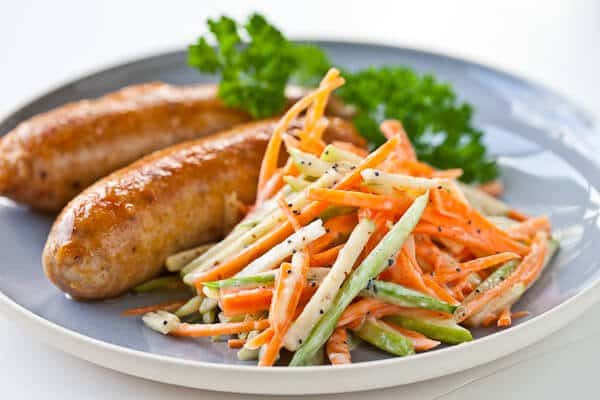 There's a big secret to cooking large sausages, and it's to keep the flame low or do a combo method of steam and grill. The problem with cooking large sausage is that the casing can burst fairly easily on high heat. So, if you're grilling outside on your BBQ grill, arrange half of your grill on low heat and the other half on medium. Let the sausage cook and get nice grill marks on the hotter side first, then move them over to the low heat, cover to finish cooking through.If you're cooking on your stovetop, follow the instructions below in the recipe.As for the dressing, I like to make it in a separate bowl first and then combine half of the dressing with the slaw ingredients first. Then I'll add in more to taste. The reason I do this is because then I can adjust, based on how much vegetable and fruit I have in the bowl (not all carrots are the same size!)
Print Recipe
Prep Time 10 mins
Cook Time 15 mins
Servings 4