Well, I could tell you how exactly it all happened, how we spontaneously ended up with 5 new pets, but I think the photos alone tell the story sufficiently. 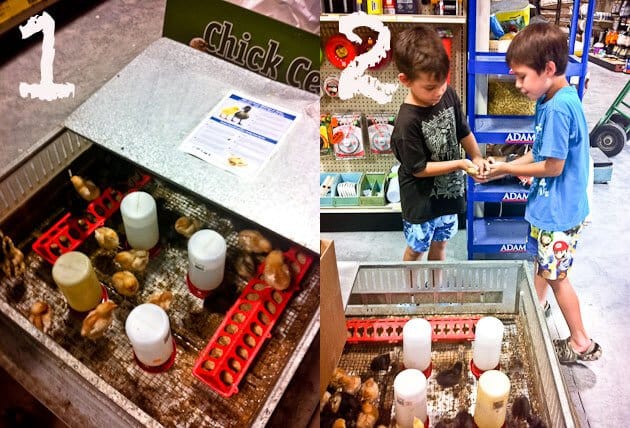 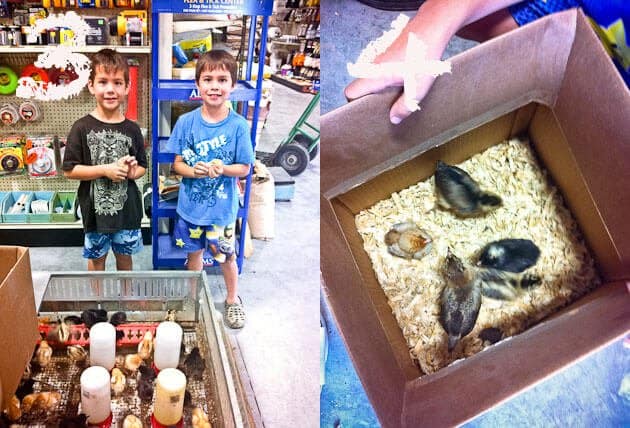 If I wasn’t holding the camera, I’d be right there next to the boys with a chick in my own hand and ‘aaaawwwwhhhh’ and ‘ooooooooooooh….so cute!’

These 5 little guys came home with us in a cardboard box. In the car ride home, I had to think of a good explanation to tell Scott, how we left the house to get haircuts & shop for school supplies and came home with 5 chicks, no haircut and only 2 reams of paper.

“Uh…the hairdresser forgot to bring her scissors to the shop….and….uh….Target ran desperately low on school supplies, I even had to steal these 2 reams from someone else’s cart….and…ummmm…..we drove 20 miles to the farm supply store to see if they had any crayons.”

Which still doesn’t explain these chirps. Or the 10 pound bag of pine shavings. Or the 5 pound bag of feed that I lugged into the house. There was no way I could hide the chicks and then raise them in secret.

“Why is your closet chirping?”

So I had to fess up to Scott, “I am an enabler. I encouraged the children to fall in love with these chicks.”

She’s the bigger one – a very curious chick who likes to spread and flap her wings! We haven’t named the Amauracanas yet – would love some suggestions – what does she look like? 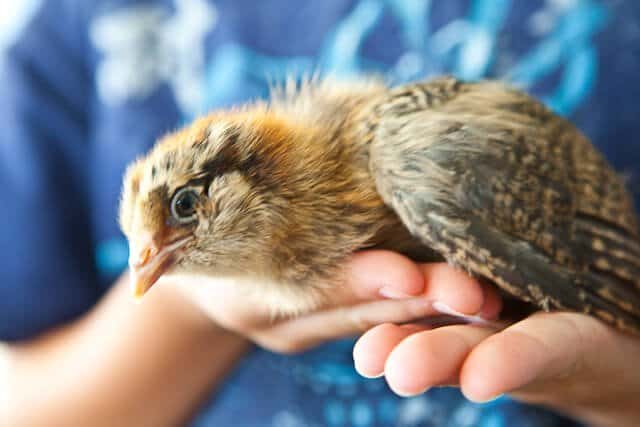 The other Amauracana is a little smaller, very cuddly. What would you name her? 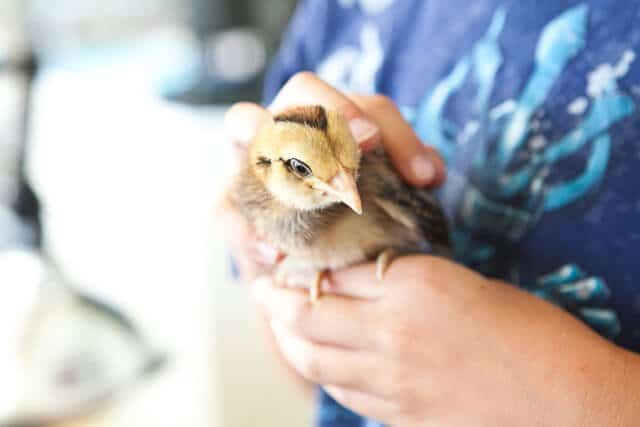 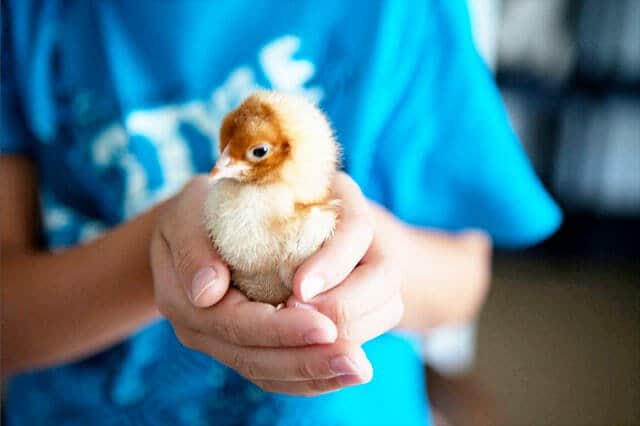 Nathan named little 1-week old gal “Frenzy Cutie-Pie” she’s the smallest of all of them, but is crazy-fast. I don’t know what breed she is, maybe some of you chicken experts can give me a clue? A friend thought Frenzy might be another Amauracana. 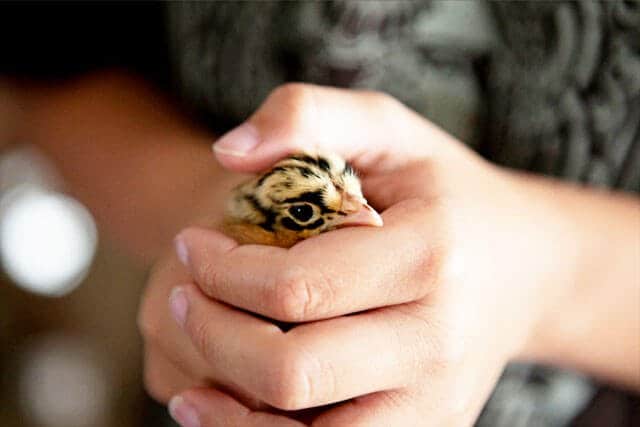 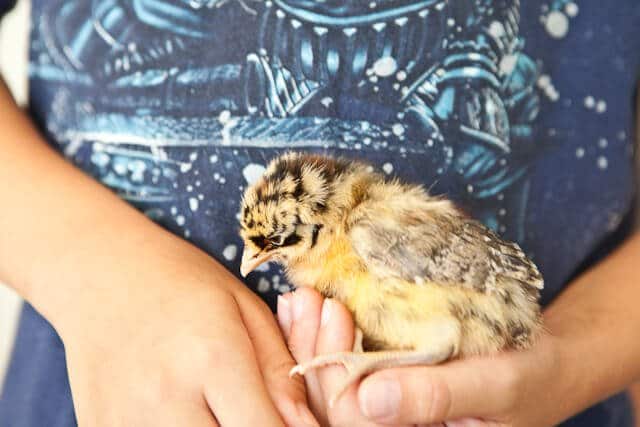 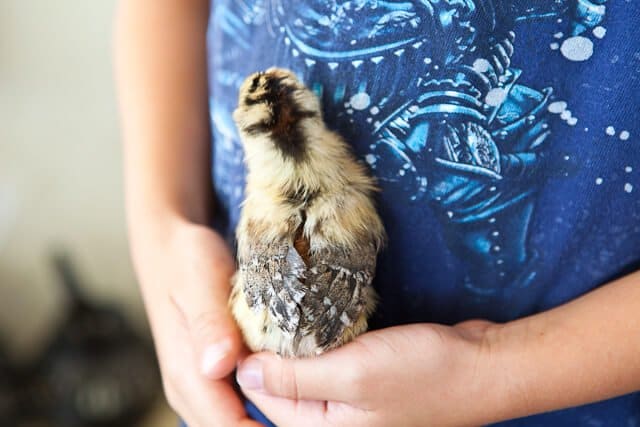 The last one, we let Scott name (pssst….the best way to get your husband to accept and love the chicks? give him one to name)

This is Oreo, all black with a spot of white on her head and near her feet. She’s a Plymouth Rock, and will turn into a gorgeous black-white hen, also called “Barred Rock.” Oreo is also 1-week old. 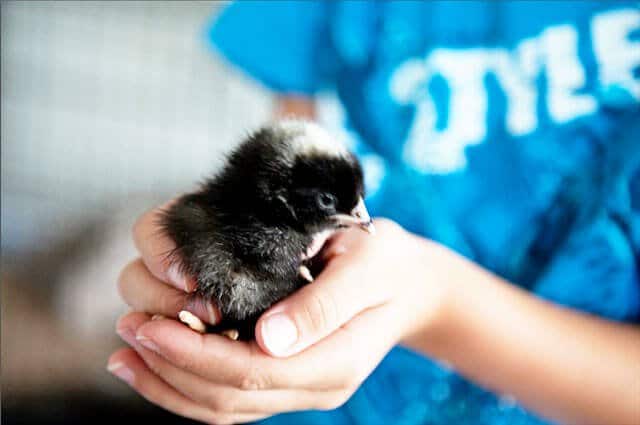 DIY brooder for the chicks

We brought them home in a cardboard box and needed a little larger home for them, something a little higher too. 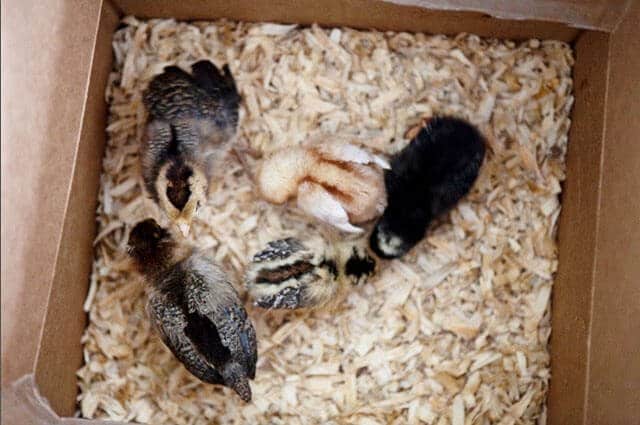 When caring for chicks, you can spend money buying a fancy brooder (little chicky house) or DIY with what you have. We had these big plastic totes. 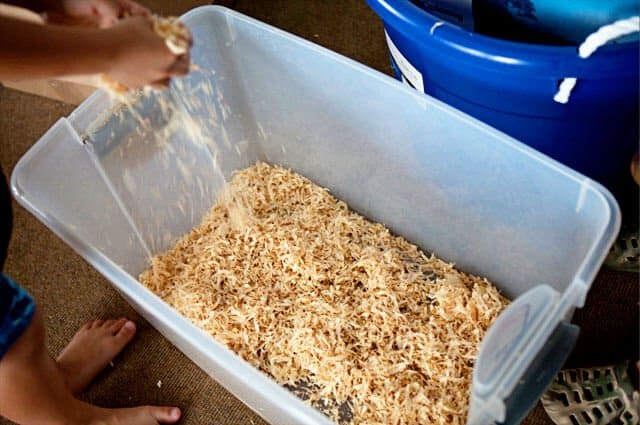 We lined the box with soft pine shavings.

Set the waterer to one side. 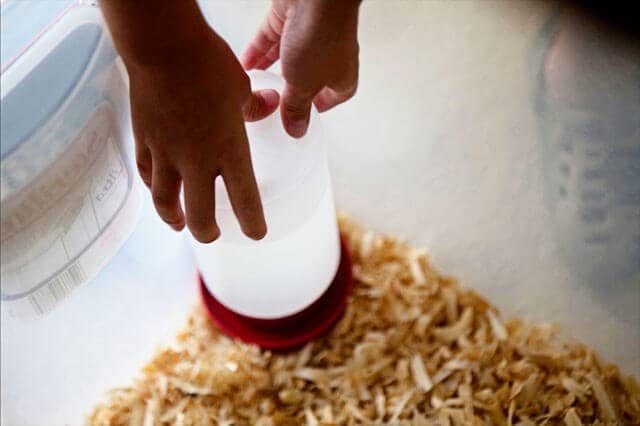 And of course the feed. We poured the feed into a glass mason jar – 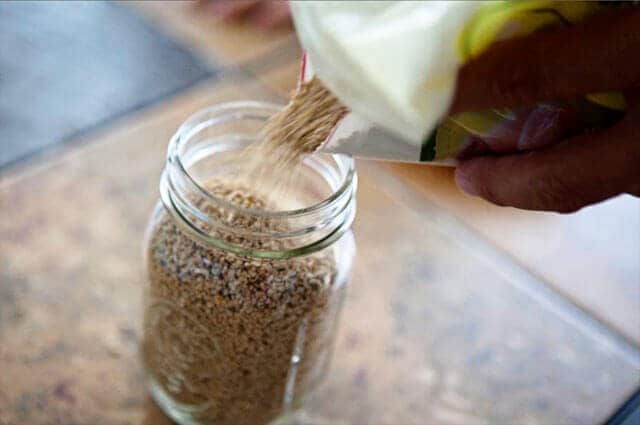 – and the feeder screws perfectly on. 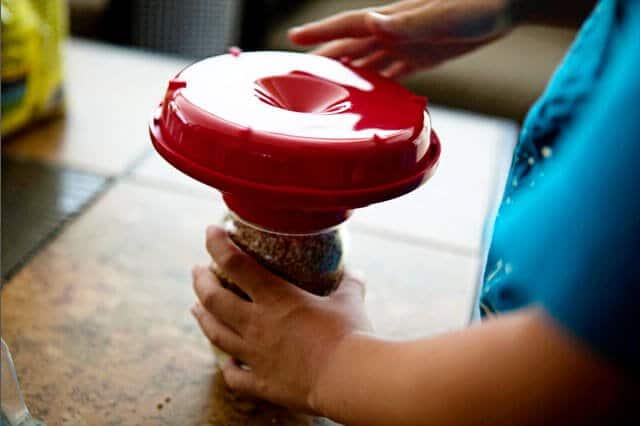 Invert it and voila! The glass mason jar is great – adds weight to the feeder so that the chicks can’t tip it over when they get a little older. 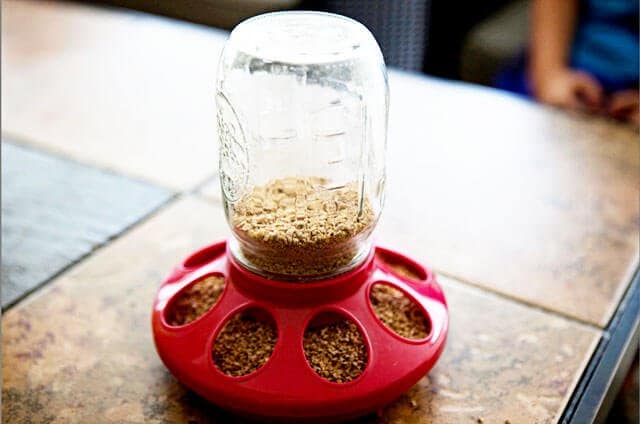 We placed the food in the other corner of the box, thinking it would give the chicks plenty of space to….uh…play…hang out….or do what chicks do….

….which apparently is just eat, we found out. 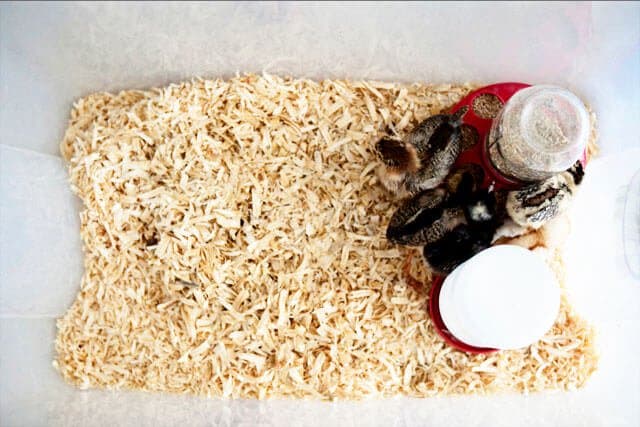 Re-strategize. Food and water are the center of their universe. *nodding* I like them already, except replace wine instead of water for me please! 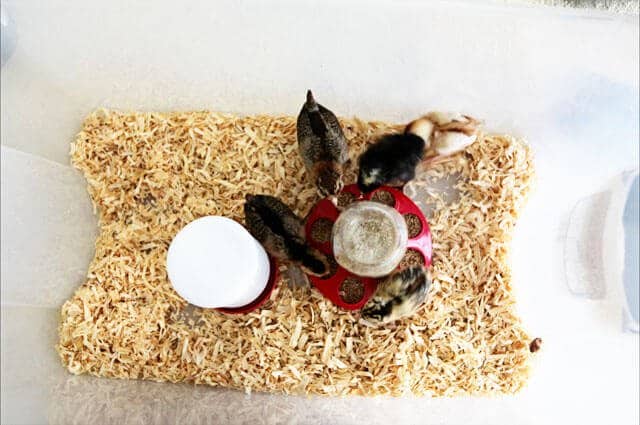 Once they were fed and watered, the flocks were as happy! They played…. 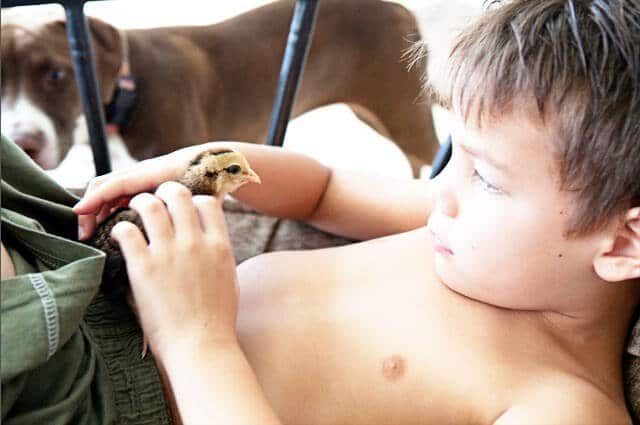 …and even took a nap. 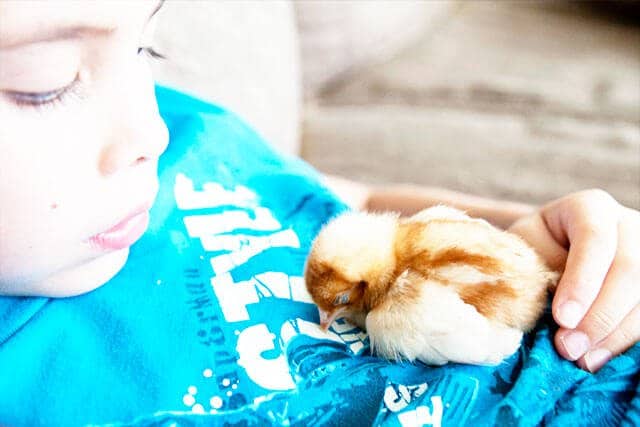 Here in Florida, it’s hot enough outside that it’s the perfect temperature during the day. We have a screen enclosed patio, so there’s no danger of evil predators.

We learned that for chicks in their first week of life, they need a temperature of 95F, then decrease the temperature by 5 degrees each week. It’s been 90-95F outside here, so we kept the box on the patio without any need for a heat lamp.

Once the sun started going down, we set up a lamp bought at the hardware store + clamp + infrared heat lamp. 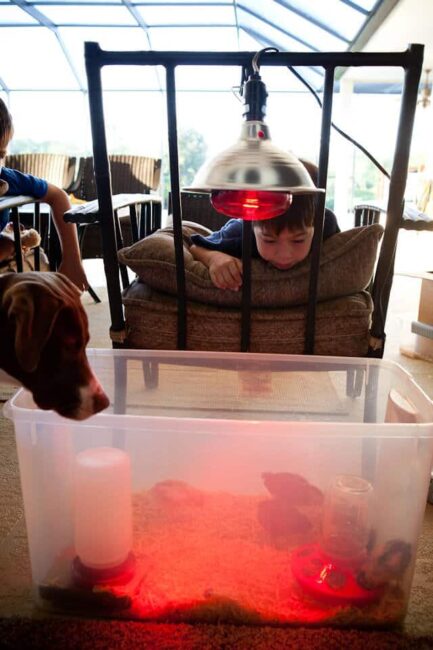 The lamp was hooked up to a dimmer switch that Scott had rigged up (extension cord + electrical outlet + dimmer switch). 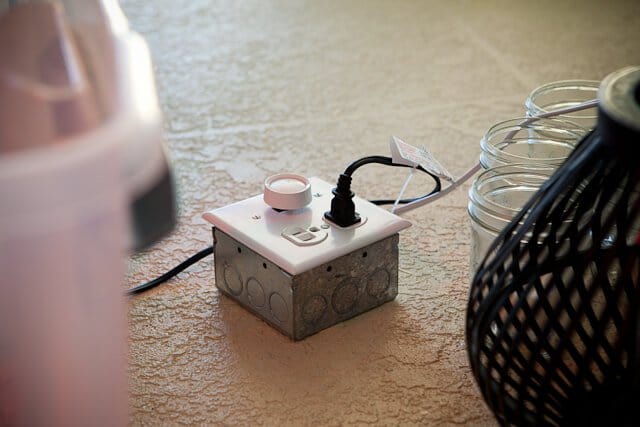 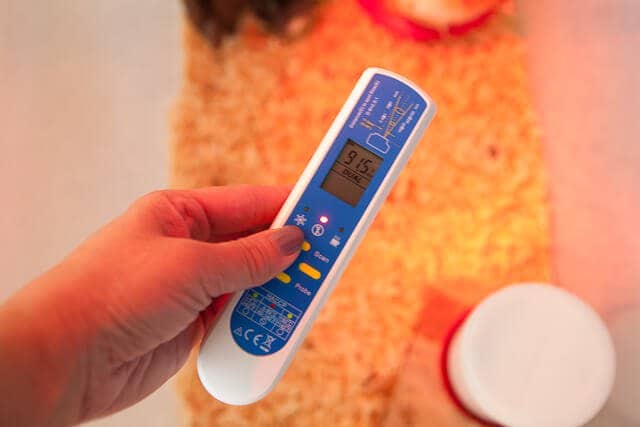 Here’s the back of it. Just point the scanner thingy towards whatever surface you want to measure. Control the intensity of the light/heat with the dimmer switch until you get the right temperature. 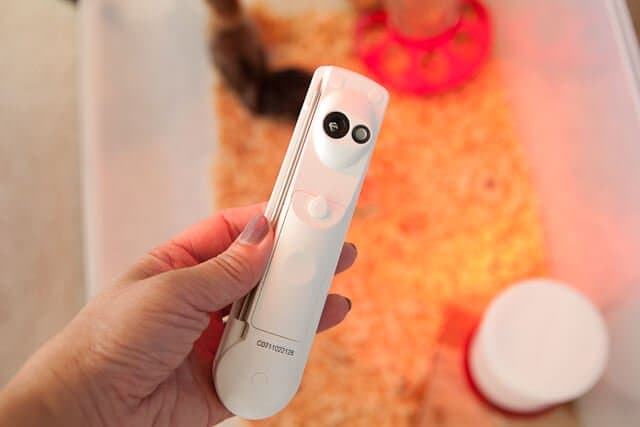 We didn’t think we needed a cover for the box, until we saw this: 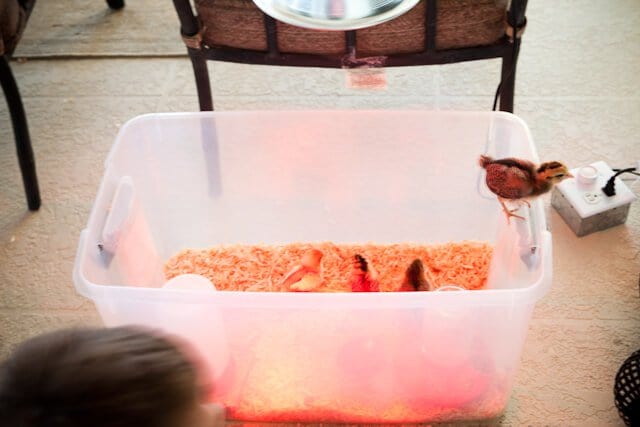 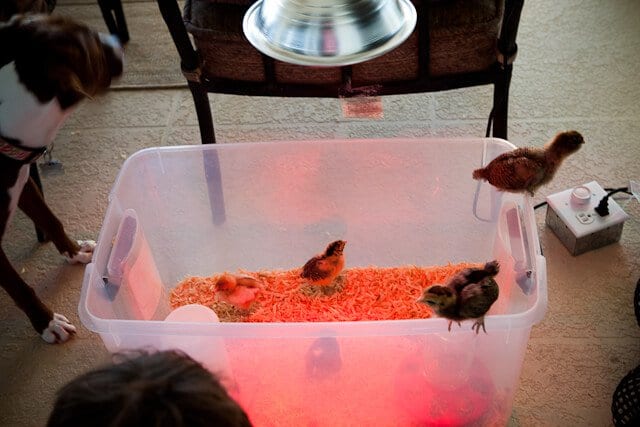 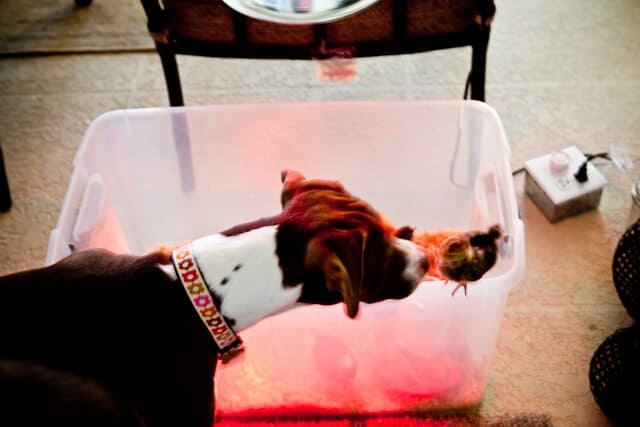 As a temporary measure, we removed a screen from one of our windows and placed it on top. Scott will fashion a more sophisticated screened lid later. 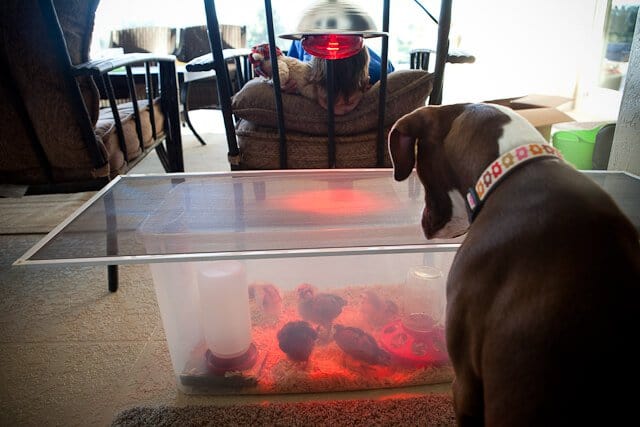 I think Coco will make an excellent “Daddy.” 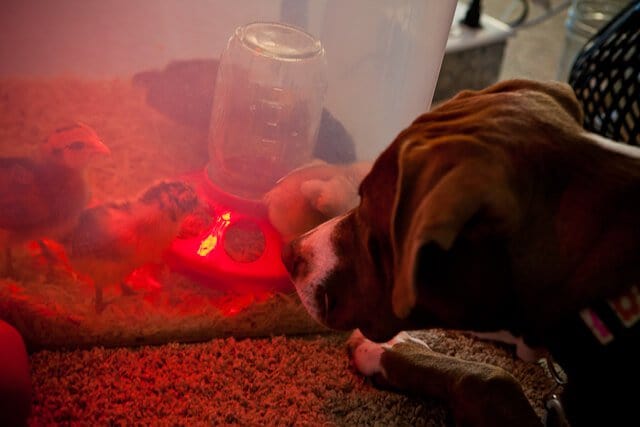 6 months until we have fresh eggs every day!