This Easter Ham recipe is light, simple and so delicious! Perfectly cooked ham, covered in a sweet and fruity glaze, perfect for spring and Easter! 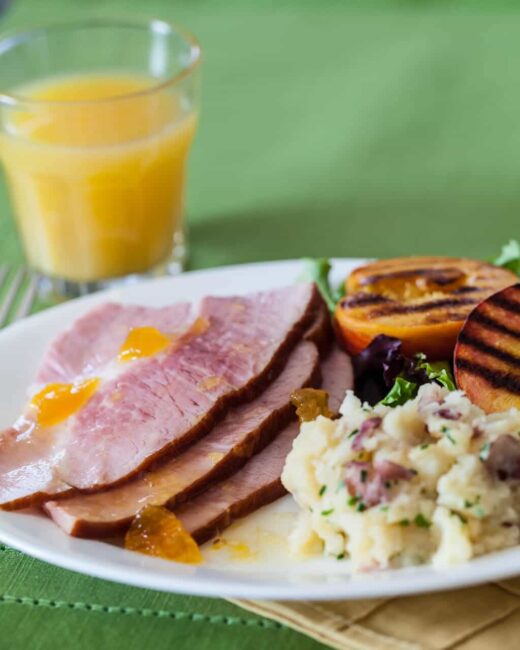 Why This Ham Recipe Is So Good 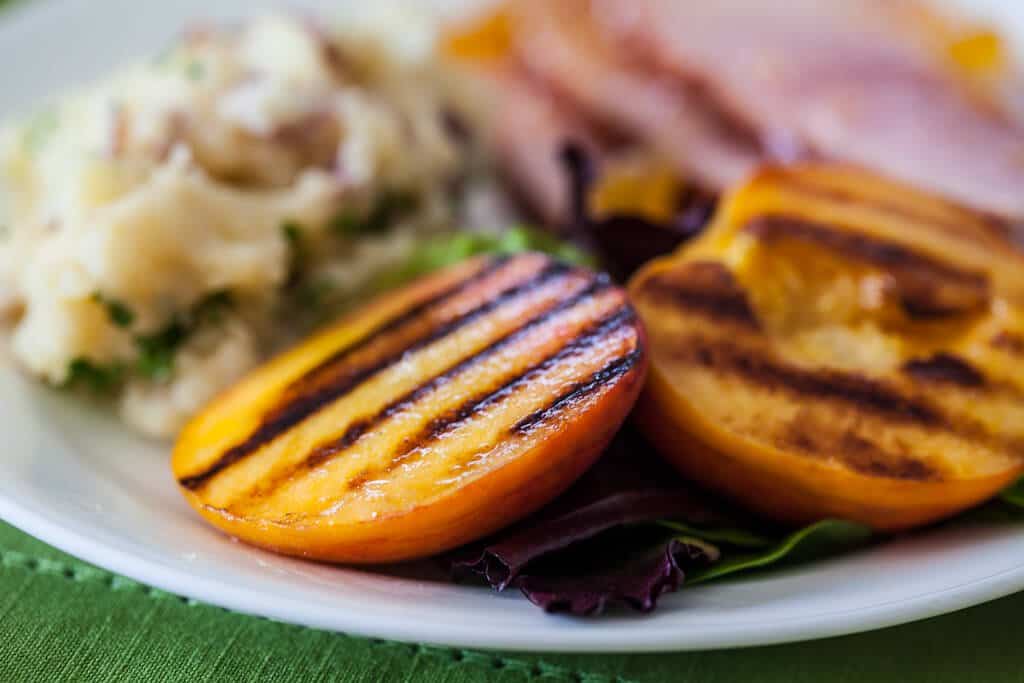 How To Make Easter Ham with Grilled Peaches – Step by Step

Here’s the ham. See on the label “Semi-Boneless Ham with Natural Juices” – that’s good. Open it up. 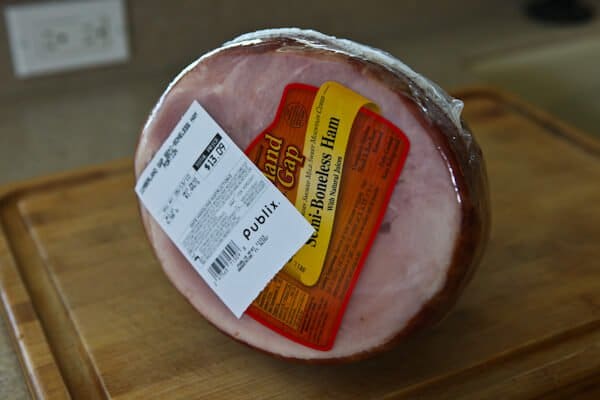 Use a sharp knife to score the ham, criss-cross. Just go in one direction diagonally, then the other way so you get “diamonds.” The scoring is totally not necessary, but it looks really pretty and also will help the glaze really stick onto the ham in a later step. 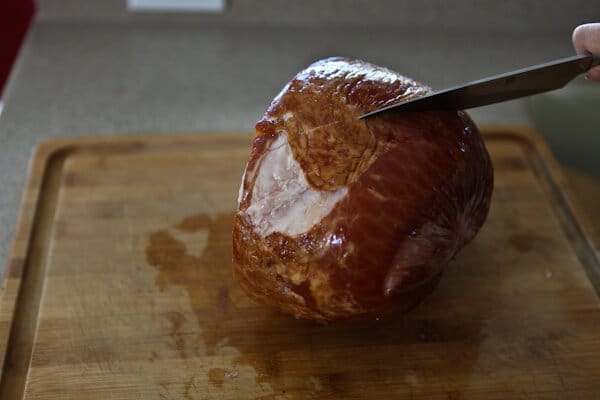 Place your ham in a oven-safe vessel not too much larger than the ham itself. Either a roasting pan, or large saute pan will do. Here’s my beloved cast iron. See how there’s only a couple inches of space around the ham? 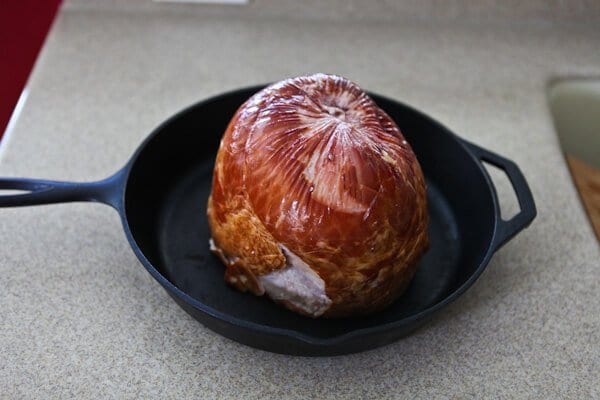 Pour the peach nectar in the pan until it reaches about 1/2 inch up the sides. The juice helps with keeping the ham moist. 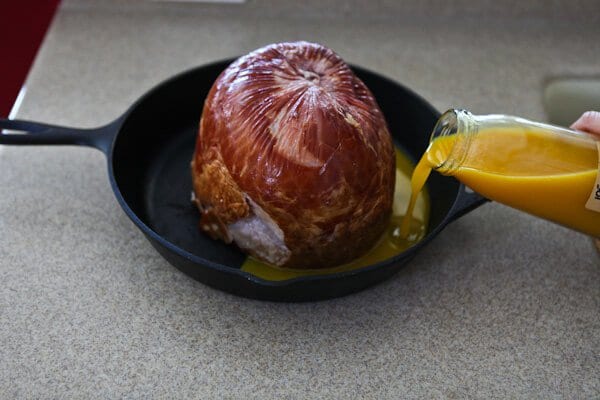 Cover with foil…which in the oven will help create steam with the peach nectar. So, instead of just warming your ham in the hot, dry oven – you’re creating a moist, flavorful (peachy!) environment. Bake 15 minutes per pound. 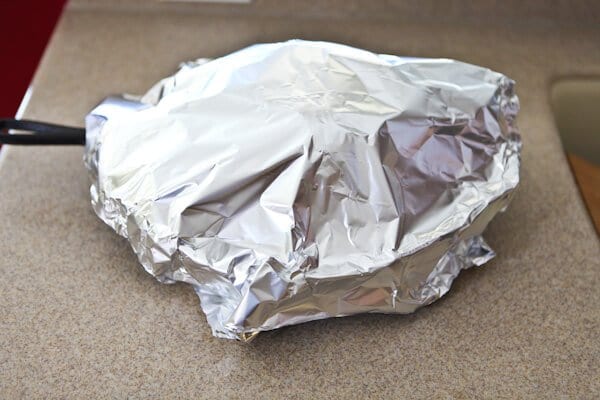 Bake in the oven 275F. We’re gonna warm this baby up low ‘n slow, to ensure the ham does not dry out or overcook. 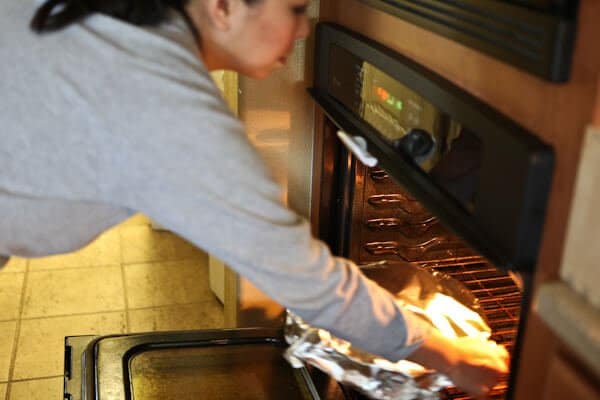 In the meantime, let’s make the glaze: brown sugar, peach jam, ground cloves and ground ginger. Just heat it up and let it get all sticky and glaze-y. 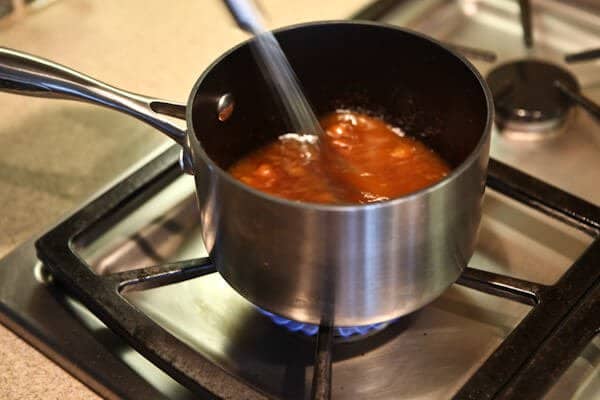 Hey, remember that ham!? Well after the 15 minutes per pound is up (for me it was about 1 1/2 hours) it will look like this: 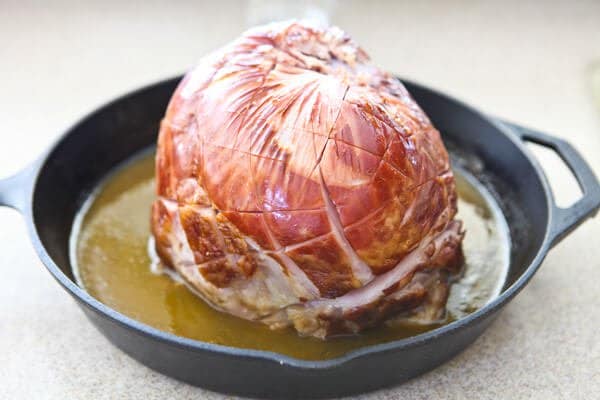 Now’s the time to crank your oven to 425F. While the oven is coming up to temperature, brush with some of the Peach Glaze on top of the ham. Get the glaze in those cross-hatched grooves (You’ll only use some of the glaze, reserve the rest): 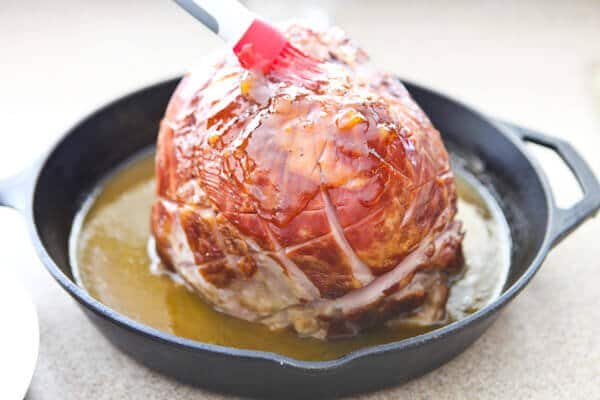 Glaze all over the ham. 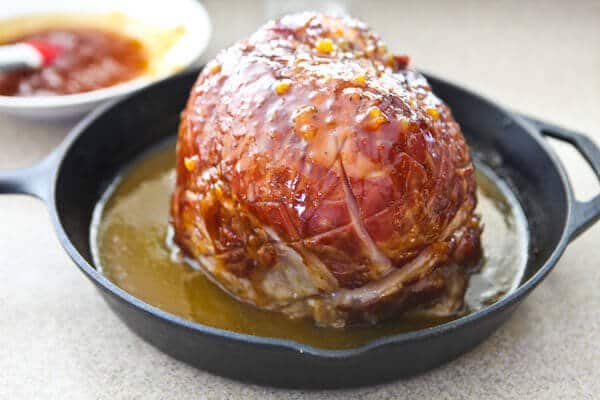 Stick it back in the oven to let the glaze get caramelized. 15 minutes later…..it’s DONE. 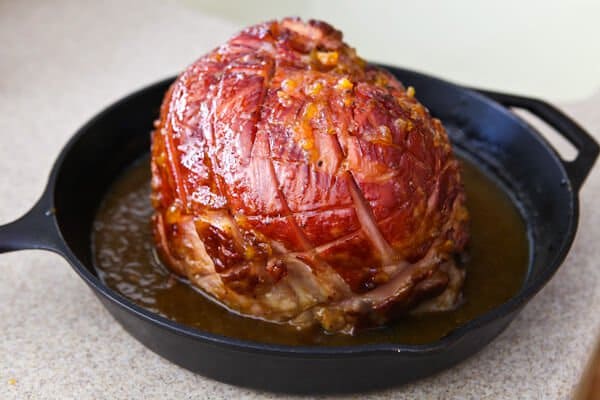 Remove the ham to a cutting board and let rest. In meantime, let’s finish the glaze for serving. There’s  a lot of pan juice left: 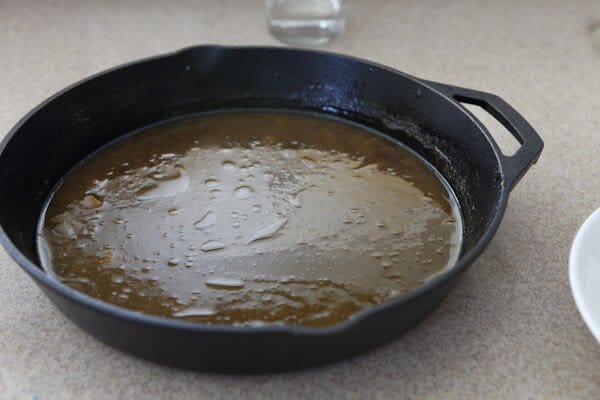 Pour some of that into the Peach Glaze that’s left over — just to thin it out a bit and add depth of flavor: 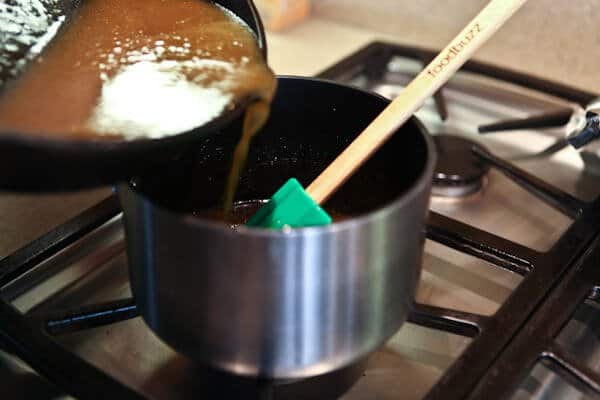 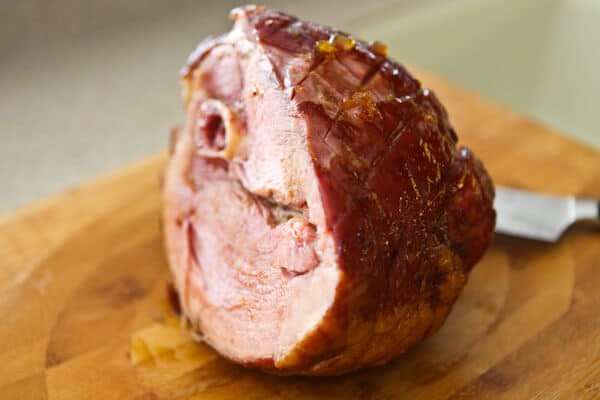 Here’s how to slice the ham. See that bone in the middle? That gets in the way – so we’re going to take a knife and cut horizontally right above the bone: 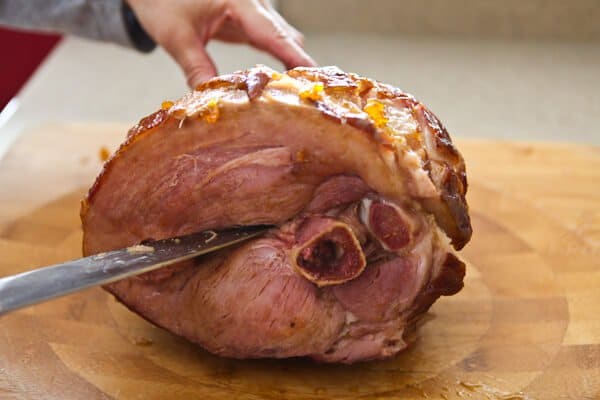 And then go the other way: 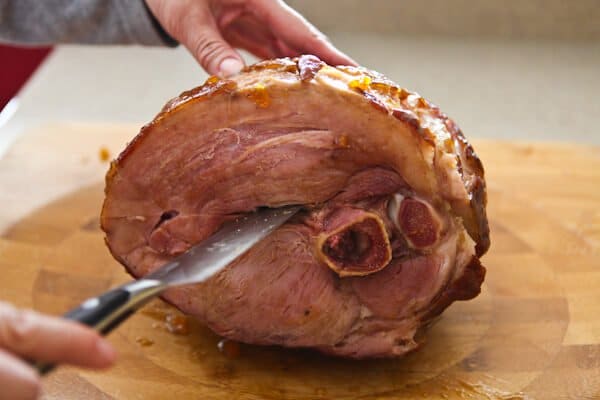 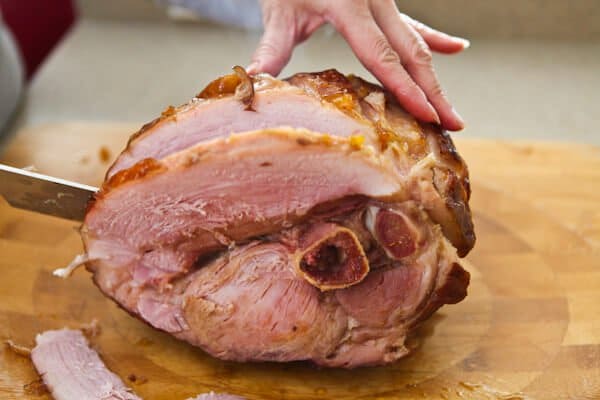 How beautiful is that?! 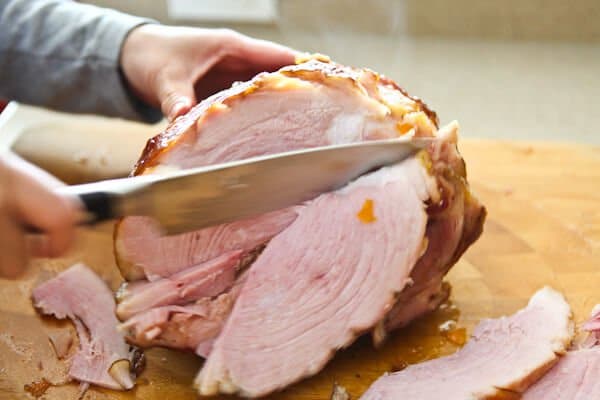 Grill the peaches and serve alongside with the Ham topped with Peachy Glaze. 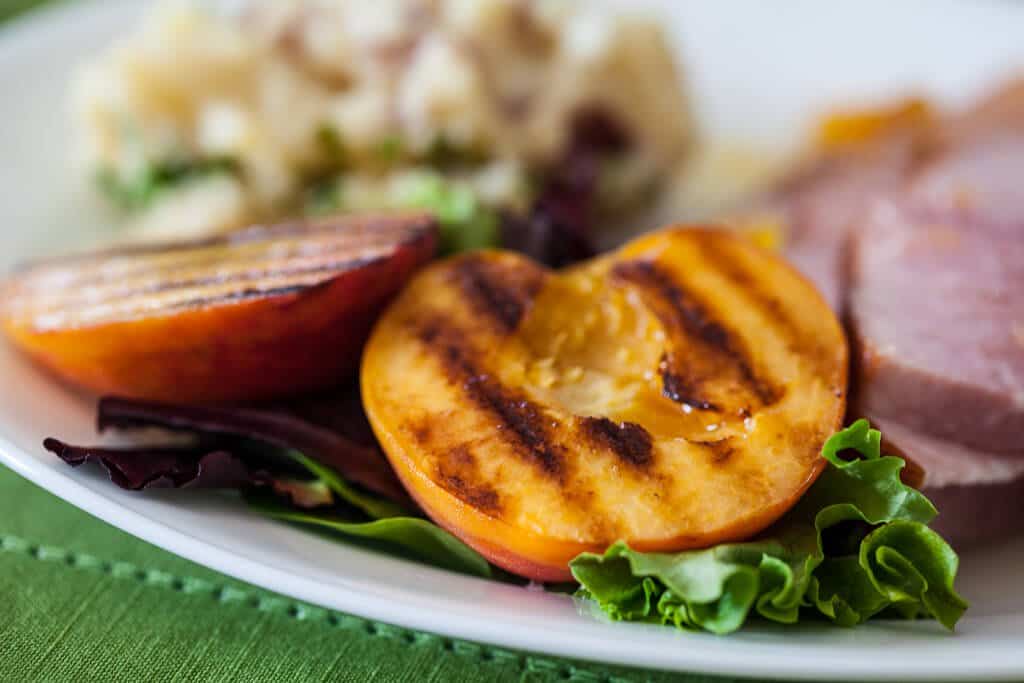 Have a Happy Easter! 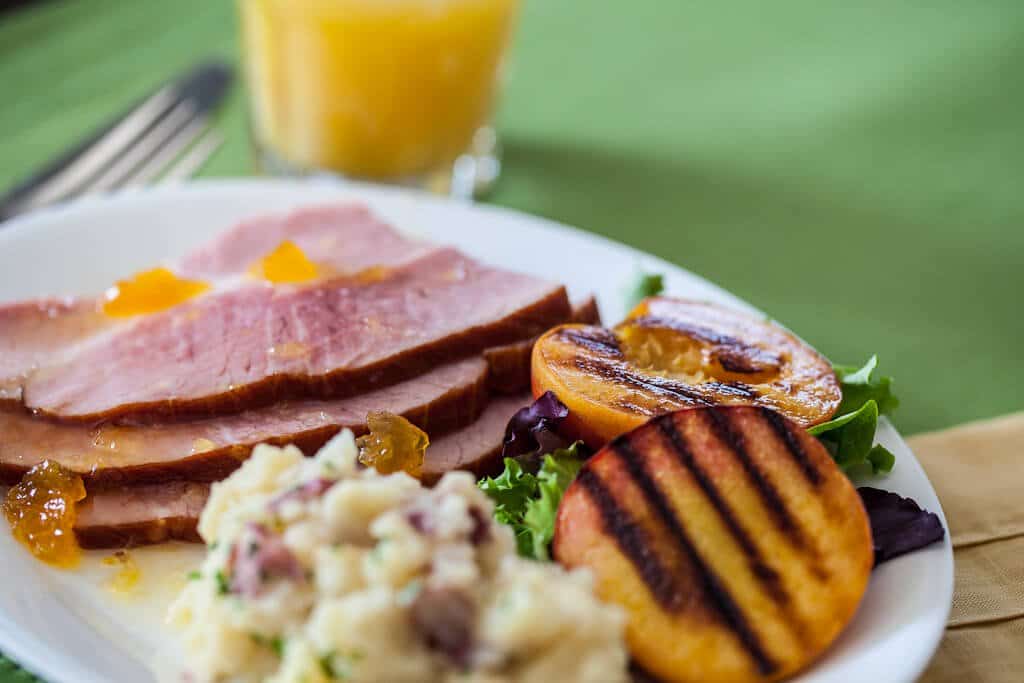 Cooking Easter ham may look intimidating (it’s a big hunk of meat!) but in actuality, it’s one of the easiest things to cook. First of all, it’s fully cooked already (unless you’re buying country ham, which is an entirely different thing altogether) and all you’re doing is warming it back up, slowly.

The glaze that I love most are sweet and fruity. This recipe features peaches, both in the glaze and also to serve alongside the ham.

Grilling the peaches makes them sweet, warm and juicy. 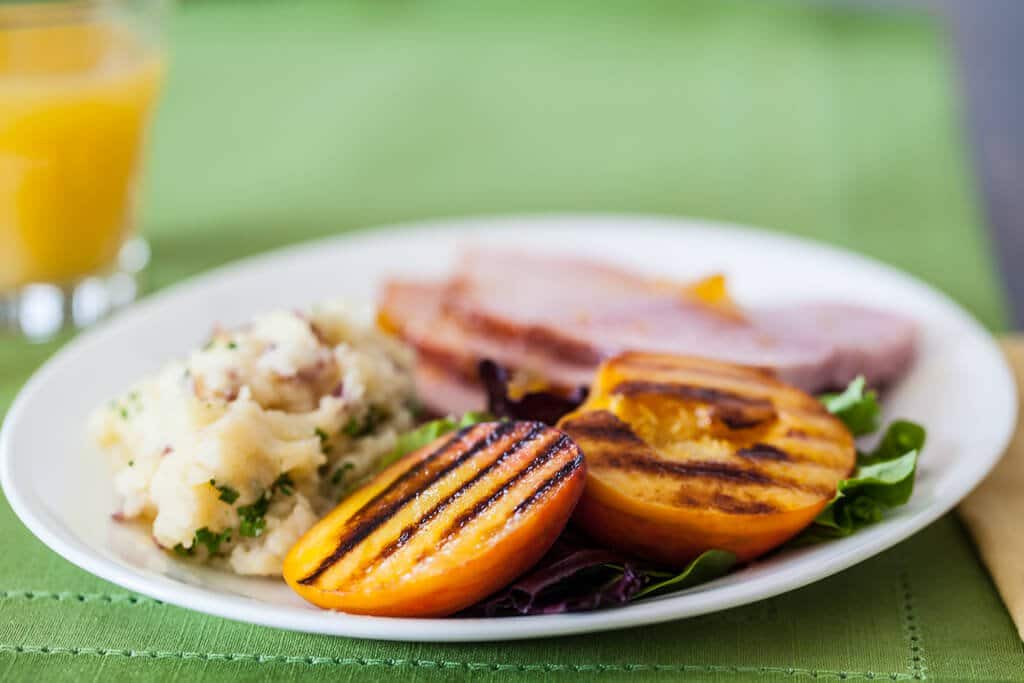 What Kind of Ham to Buy

Here’s the key to buying ham: check out the label and make sure it says, “Ham with Natural Juices.” If your label says “Ham with Juices and Water” – don’t get it. The best ham is the one with the least amount of additives and water.

The photos are borrowed from my Ham with Mango Ginger Glaze Recipe since both recipes are identical in steps – just with different fruit!

Have you tried this Easter Ham recipe? Feel free to leave a star rating and I’d love to hear from you in the comments below! 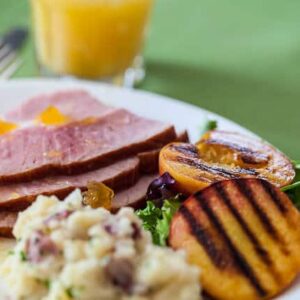 Jaden Hair
This Easter Ham recipe is light, simple and so delicious! Perfectly cooked ham, covered in a sweet and fruity glaze, perfect for spring and Easter!