Below is a slideshow of how I got my “money shot” for the Nobu’s Lobster Carpaccio dish. The first shot is the money shot – are you interested on all the other shots that led up to my favorite photo? Which one is your favorite photo?

This recipe is from chef Nobu Matsuhisa, a man whom I respect so much but damn, I can’t afford to eat at his restaurant in Los Angeles! When I was in college at UCLA, I had to drop out for a semester just to afford a meal there. And to think…all the learning that I could have had that extra semester in school I could have probably gone to graduate school, earned a piece of paper that says “MBA,” then gotten a fancy job somewhere in a big tall building with $3,000 expresso machines. THEN after 25 years of climbing the stupid ladder working 80 hour weeks, I’d retire with a ‘do of grey hair, stressed to the hilt and finally have time to stay home and pursue my passions….

which is cook, eat and blog.

What I love about this recipe is that the lobster is actually flash-cooked in a mixture of super-hot olive oil and sesame oil. Instead of putting the lobster into a hot pan…hot oil is POURED on top of the lobster.

This ensures that the delicate lobster slices gets just a barely-there sear. More importantly, the chive/ginger topping gets flash-fried, releasing its flavors. This is the same technique that I use for my

Oh but wait….I think I need to explain something else…..

If you’re vegan or a member of PETA, just stop reading.

I bought a live lobster…and in order to kill it and to make it easier to extract the meat, I froze the lobster for 20 minutes to make it go nighty-night. Then I boiled the lobster for just 30 seconds and immediately plunged it into ice water. This will help you get the meat out without cooking the lobster.

The sizzling hot oil is a technique that Nobu loves to use – it really does release the flavors of the herbs and the lobster. Plus for all the sushi/sashimi scaredy cats, this is a great way to introduce raw fish! 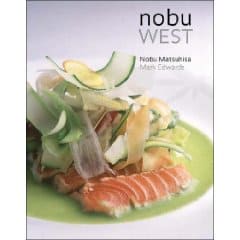 1. Put the lobster in the freezer for 20 minutes, so it goes into a deep sleep and won’t be aware of the next stage.

2. Bring a pot of salted water large enough to cover the lobster to boil in. Plunge the lobster headfirst into the water for 30 seconds, remove and plunge into a bowl of ice water to cool.

4. Place the lobster meat onto a serving plate. Drizzle the Yuzu Dressing on top. Garnish with the ginger and the chives.

5. Heat a small pan over medium-high heat until hot. Add the olive oil and the sesame oil. When the oil just begins to smoke, pour the oil all over the lobster to sear the top.

To make the dressing, whisk all the ingredients together.