Or at least pretend to be one.

I’ve backed just a total of 96 startup projects via Kickstarter and Indiegogo. If you count the additional six projects that I pledged funding to but didn’t succeed, that’s 105 companies that I’ve invested in.

Although, I think I need to reclassify my activity as a “hobby” instead of an “investment.” Naturally, I’m not getting a part of the company, and essentially, I’m just pre-ordering. But it still is a major risk.

If it was a true investment, I would go broke – the number of these projects that actually DELIVERED (ahem, Instacube) is 51 projects. Though, keep in mind 14 projects are still in progress….so that really brings my delivery percentage to 62%

Of those that have delivered, I am DELIGHTED with only 21 of them. That makes my success rate 25% so far.

Still, I love my hobby.

It’s a delight to back people’s dreams and be a part of an invention!

There’s one I’d like to introduce to you, because it has the potential to change the way people use the wok.

This is Glen. He’s the inventor of the WokMon, a steel ring that can sit on any gas/butane/propane stovetop burner. 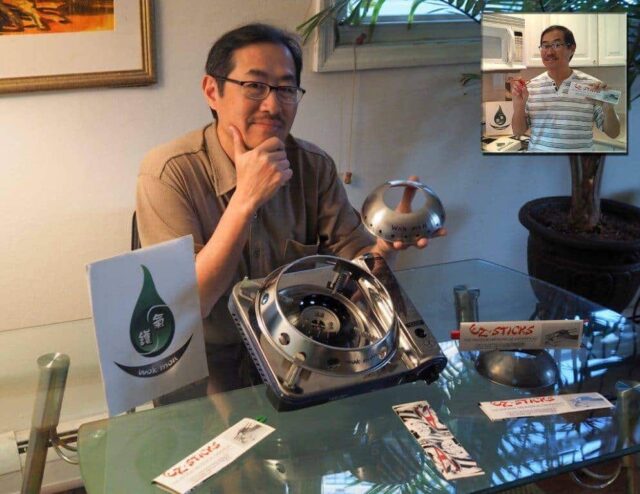 WokMon will allow you to go from wimpy fire to Chinese restaurant crazy flame!

Those are photos from Kenji of Serious Eats, who tested out a prototype of the WokMon.

Better yet, here’s his video:

Intense fire is what makes “Wok-Hei” which is literally “the breath of the wok.” It’s what makes Chinese restaurant stir-fries so damn delicious.

The high heat allows chefs to quickly caramelize the ingredients, giving the resulting dish a naturally smoky, umami flavor. Cooking this way ensures that the thinly sliced meats are crisply toned on the outside, and incredibly tender on the inside.

Restaurant wok stations are equipped with special burners that allow for 125,000 BTUs and higher. Our home stoves have a measly 15,000 BTUs (unless you have a high-end appliance, like Viking or Wolf).

The WokMon’s unique shaped ring directs heat to the middle of the wok and allows for airflow to be funneled to the source of the flame. More oxygen to the flame means bigger flame.

Glen sent over a test unit, which I received a few days ago.

I had fully planned on testing the WokMon at home on my portable butane burner (my kitchen has no gas — pout). I won’t bore you with why I couldn’t proceed – let’s just say, a comedy of errors on my part. Couldn’t find my cast iron wok, butane cartridge empty, blah blah blah.

It’s just as well, as my Kenji’s review is just stellar and more thorough than I could have done (I need one of those fancy infrared thermometer thingies).

My Thoughts on the WokMon Project

Because I’m recommending this product to you (I’m not getting anything out of supporting WokMon, other than I hope you back the project so that it can be funded!) – I wanted to give you my honest thoughts.

My hope is that Glen reaches his goal. It’s a game-changer in the industry…and it’s affordable at less than $50 for a WokMon! If it succeeds, FANTASTIC!!!

If the goal isn’t reached, I hope that Glen doesn’t give up. It’s a product that deserves to be made and available to us wokking fans 🙂

Go to WokMon campaign page and back the project! (and tell your friends about it!)