Grow: Aquaponincs, what to do when disaster strikes

Now I will admit I am a lazy gardener. If there is an easier, simpler way of growing my own food then I will try it. The ease of an Aquaponics garden is one of the things that appealed to me. Once an aquaponic garden is set and running, for the most part it is really simple gardening. Very little to no weeding and all my harvesting and planting is done on a high table eliminating the back breaking bending over all the time. Most days my gardening chores are just feeding my fish and watering my microgreens. And I am still looking for a way to automate the watering of my microgreens so I can scratch one more chore off my list.

But when it goes wrong, it can go horribly wrong. See all these happy koi fish? Frolicking and swimming all around their tank. They will even splash you when you throw some food into their tank. We keep the cast net on top of the tank to keep them from jumping out! 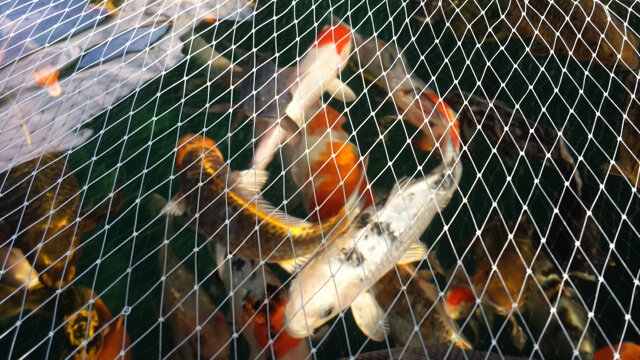 Then overnight, that picture of joy and happiness can turn into a disturbing nightmare like the one pictured below.

When I went to feed the fish Saturday morning, now referred to as Black Saturday, I found 12 of our largest koi floating on the top of the water. The rest of the fish were swimming near the bottom of the now mirky brownish greenish water. 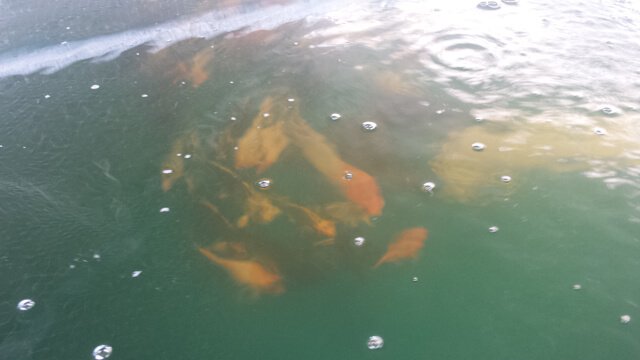 So What do you do?

If you’re like me, then the first thing you do is feel this rush of panic wash over you. Holy Koi Batman! Are the rest of the fish going to die? What happened? Why is the water not clear any more? Is the water too hot? Is it too cold? Did some alien from outer space poison my fish in some whacky science test? What is going to happen to the plants? Of course all those questions flood my mind in a nano second without a chance of being answered leaving me flooded with a feeling of overwhelm.

Take a deep breath. The feeling of overwhelm passes and the empty voids its passing left are slowly filled with a sense of loss and sadness. But somewhere deep down inside me a spark is lit. It quickly becomes a smoldering flame growing larger and larger within me. A desire to save the other fish, correct the problem and figure out what really happened. Better get cracking and go total CSI on this thing. We got twelve dead fish, mirky water and a whole lot of questions that if left unanswered may cause a future distrust between humans and those pesky fish experimenting aliens or at least upset the near Zen like balance that exist in our house.

For me the first step is STOP; don’t disturb the scene. Don’t feed the fish. Leave everything the way it is while you start investigating what happened. I look at and listen to the system. Is everything flowing the way it normally does. If it doesn’t look right or sound right add that to your list of things to check.

From there I turn my attention to removing and inspecting the deceased fish. I look each one over looking for any clues. I look at their gills to see their condition. Are they pink, bright red or even show signs of scarring or bleeding. I look for missing scales and parasite signs. I note the information and remove the fish from the system. I will then check the fish tank and filters for any other deceased fish. If left in the system, dead and decaying fish will cause serious problems.

I next reach for my API Freshwater Master Test Kit

. Water chemistry holds a huge number of clues to what is going on in your system. Fortunately for me I had done my weekly testing of the water quality just a few days before. 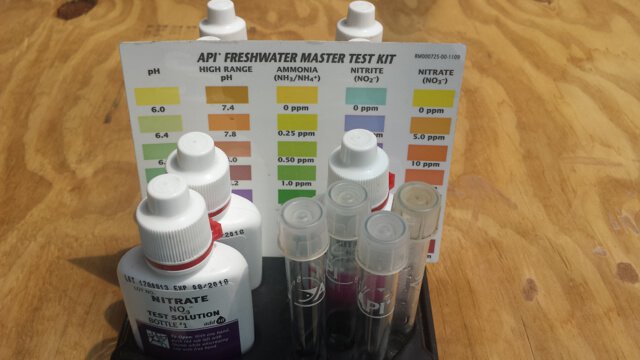 I run the four basic test which are pH, Ammonia, Nitrite and Nitrate. My weekly test results prior to Black Saturday were pH of 7.2 (which is higher than we like but very close to neutral and to be honest I was getting ready start the slow adjusting process of bringing it back to the 6.6 – 6.8 range), Ammonia was very near 0.0 ppm, Nitrite was 0.0 ppm and Nitrates were running around 60 – 80  ppm. The results on Black Saturday showed some major swings had happened. The pH had dropped nearly a full point down to 6.2, the ammonia had climbed to over 0.50 ppm, the nitrites were showing slightly above 0.25 ppm and the nitrates had dropped to 20 ppm. This is bad. Any pH swing of more than 0.2 is considered dangerous to most fish. We are usually very careful when adjusting system pH. The ammonia level rising is always a concern. Along with rising nitrite levels, rising ammonia levels are an indication that something has happened with the bacteria and they are no longer capable of handling the ammonia produced by the fish. The diminishing nitrate levels show the plants are consuming more nitrates then the bacteria is producing. But if you look at the chart below with our water at 28’C the ammonia level is still below the danger threshold.

Another clue was found when I looked into the bio-bead filter. The beads looked cleaner, whiter than they normally do. The bio film where the bacteria normally lives appeared to be stripped away. While the filter system is self cleaning, this looked like when your kids come up to you a half hour before bed time and say “I brushed my teeth, put my clothes in the hamper and am going to bed early, and you don’t need to tuck me in” you know something is up clean.

What I can best put together is something caused a large swing in the pH and damaged some of the bacteria in the system. The dead bacteria was cleaned off the bio-beads in the filter and added a mirky-ness to the water. The large pH swing caused damage to the larger fish’s gills and they died. What caused this large pH swing is still a mystery. The only thing I have done to the system other than normal feeding was removing of several spent tomato, bean and pepper plants making room for the next generation of beans. This maybe stirred something up? Perhaps, but unlikely. All the plants came from the flood and drain grow beds which are constantly flooding and draining mixing water. The cause of the pH swing is an unsolved mystery.

In the mean time, we incorporated a couple of 10% water changes and went to the pet store to get bio-filter starter bacteria

. It adds bacteria to system to help replace some of the lost bacteria. Normally the bacteria will replenish itself if there is a demand for it, but in this case I wanted to give it a helping hand.

Two days later here are the results of our water testing. The pH had returned to our goal of 6.6 – 6.8, ammonia and nitrites dropped back to near 0.0 ppm and the nitrates climbed above 40 ppm. 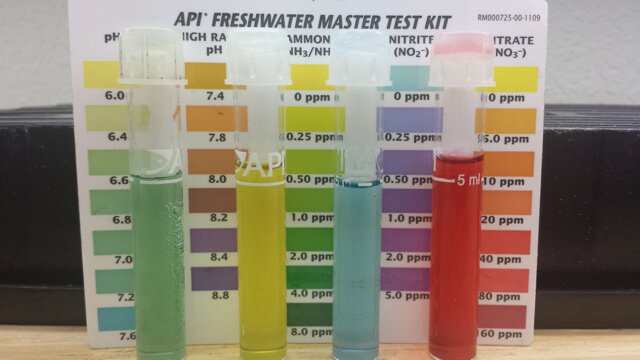 I am happy to report the rest of the fish are back to trying to splash me when I feed them.