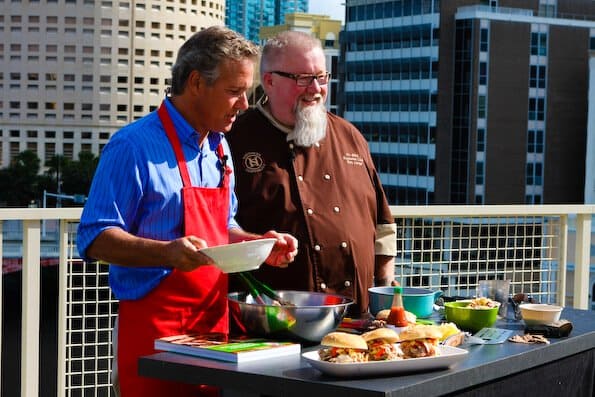 This thing really does look like a muppet character with its mouth wide open, huh!? 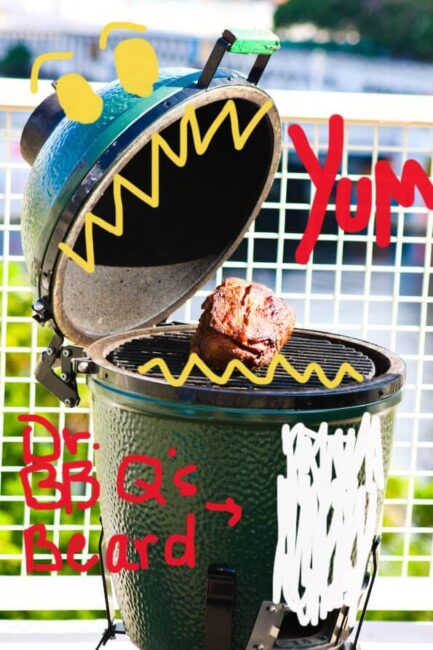 That above right there in the mouth of the Egg is a pork butt. An overnight-smoked pork butt. That’s a sweet pig’s ass.

Which really isn’t the pig’s ass. But you’d think with a name like “BUTT” you’d expect to be eating the pig’s ass. Who the hell named a pig’s shoulder “BUTT??”

BEFORE you watch the video….I just wanna say that:

I know that at the very beginning of the video it looks like you got a pie thrown at your face. A big, fat whipped cream pie.

Somewhere along that chain, somehow you got blasted with whipped cream. But at least it was quick-disappearing whipped cream, after a few seconds it magically disappears! I am so sorry, but I’ve tried three times to wipe the whipped cream off the video, but I can’t seem to fix the problem.

So to make it up to you, I will let you throw a pie at ME, 5 seconds before we go on air. I think that’s quite fair, don’t you?

Here’s host Dave, adjusting his microphone. Rob the floor manager and camera man coordinates the cameras, the talent and the set. 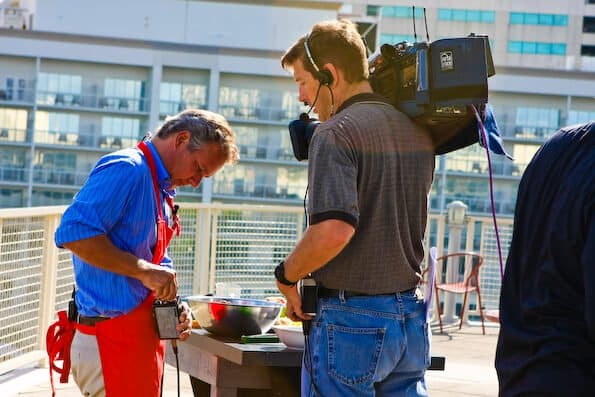 And this is his Dr. BBQ’s latest cookbook, The NFL GameDay Cookbook. The recipe for the Barbequed Pulled Pork Sandwiches are from this book. Your lover promised some nookie tonight if you bought the book. 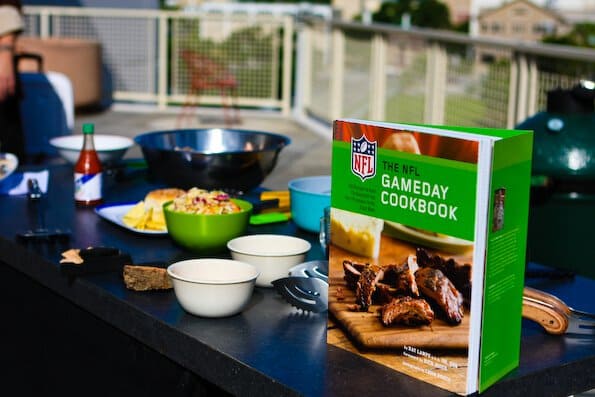 So here’s what Ray made: 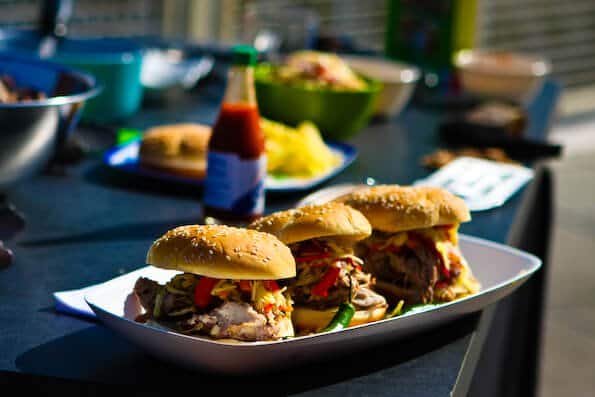 Oh, you want a closer look? 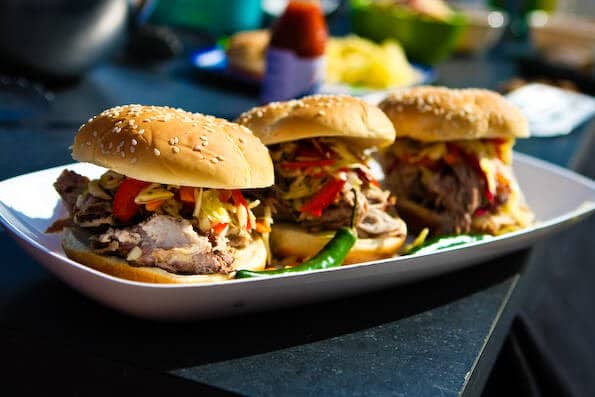 But WAIT! I didn’t even tell you my part in this tag-team!

Oh wait til you see what I made with his pulled pork…I Asian-fied it with a special BBQ sauce recipe from Kogi BBQ Taco Truck in Los Angeles…I’ve got a recipe and video of the: 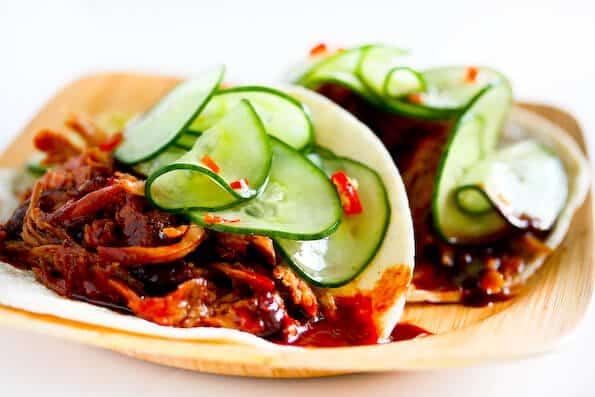 This is what real barbecue is all about. A long slow cooked pork shoulder is as good as it gets. Yes, the butt comes from the shoulder. It’s the shoulder blade or the butt end of the whole shoulder. These sandwiches are best served topped with coleslaw. Pick one of mine or use your family favorite.

To make the rub, in a small bowl combine the salt, pepper, granulated garlic and paprika. Rub the meat with the oil and then sprinkle liberally with the rub. Put in the refrigerator for at least a half hour and up to 12 hours.

Prepare the grill or smoker indirect at 275 F using hickory and cherry for flavor. Put the butt in the cooker and cook until the internal temperature is 160 F. This should take 6 to 8 hours depending on your cooker. Lay out a big double piece of heavy duty aluminum foil and put the pork butt in the middle. As you begin to close up the package pour the apple juice over the top of the butt and then seal the package, taking care not to puncture it put it back in the cooker. Return the package to the cooker and cook until the meat reaches an internal temperature of 195F. This should take another 2 to 3 hours. Remove the package from the cooker to a baking sheet. Open the top of the foil to let the steam out and let it rest for 1 hour. Using heavy neoprene gloves or a pair of tongs and a fork transfer the meat to a big pan. It will be very tender and hard to handle. Discard the juices as they will be quite fatty. Shred the meat discarding the fat and bones. It should just fall apart. Continue to pull the meat until it’s shredded enough to make a sandwich. Add 1 cup of the sauce and mix well. Reserve the additional sauce for serving on the side. Serve on fluffy white buns topped with Cole slaw.

In a small saucepan mix together the vinegar, catsup, sugar, salt, Worcestershire and pepper flakes. Cook over low heat for 5 minutes stirring to blend.
Makes about two cups

This slaw goes well with all the real barbecue dishes.