How to Roast Bell Peppers

Buddha Bowl veggies will teach you the easiest ways to cook, store, and use vegetables! Bell peppers cook super fast and you can tell that they are done when they begin to look tender and vibrant.

Why Roast Bell Peppers in the Broiler

I used to roast bell peppers on an open gas flame – but it can be messy, if the pepper starts leaking juices onto my stovetop.

Roasting under the broiler is safer and less messy!

You can roast many bell peppers at the same time. 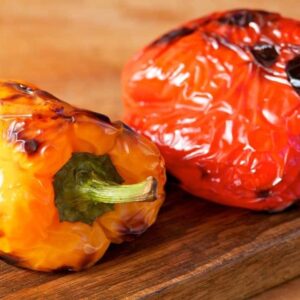 How to Roast Bell Peppers

Keyword bell peppers, buddha bowl, buddhabowl, vegetables
Tried this recipe?Let us know how it was!

If you have tried sautéing bell peppers, or any other recipe on my blog, then please rate it and let me know how it turned out in the comments below!