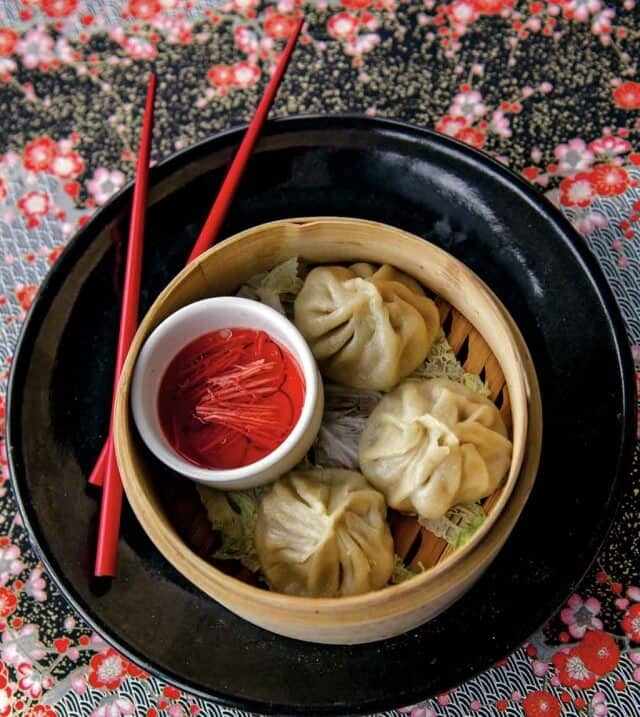 Chinese Soup Dumplings, or Xiaolongbao is a MUST TRY at least once! It’s a long recipe, the dumpling skin is hand made and the filling requires several hours of chilling. But it’s so worth it! These are the real deal. This is an authentic Xiaolongbao recipe from Top Chef star Lee Anne Wong from her new book, Dumplings All Day Wong.

Have you ever tried Xiao Long Bao? These are Chinese Soup Dumplings, steamed dumplings that contain a rich broth trapped inside the parcel of the folded dumpling. This dish should be on your must-try foods!

So, how does the liquid, or soup, get inside the dumpling? It’s gelatin, baby. A concentrated, rich soup made with pork belly and ham is set with gelatin, so that the liquid becomes a solid. Then it is mixed with ground pork, crab and shrimp, along with green onions and ginger. 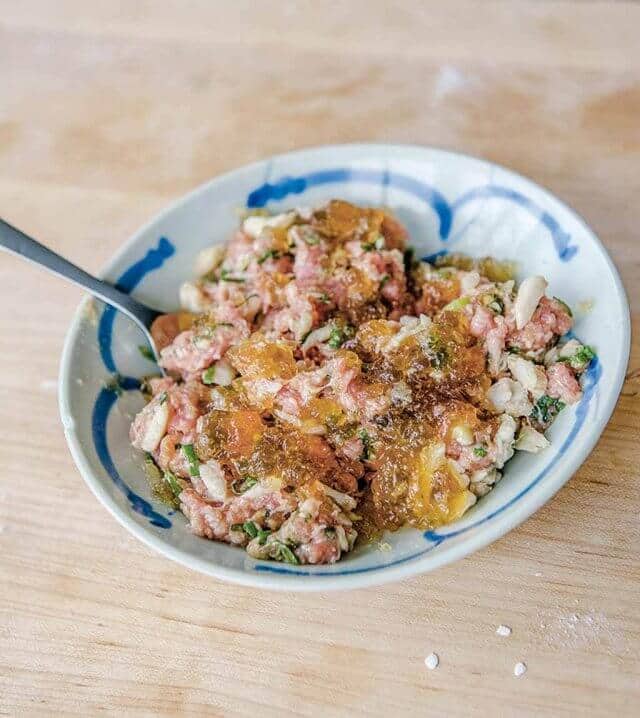 A dough is hand-made, rolled out and filled.

Then pleated and folded. 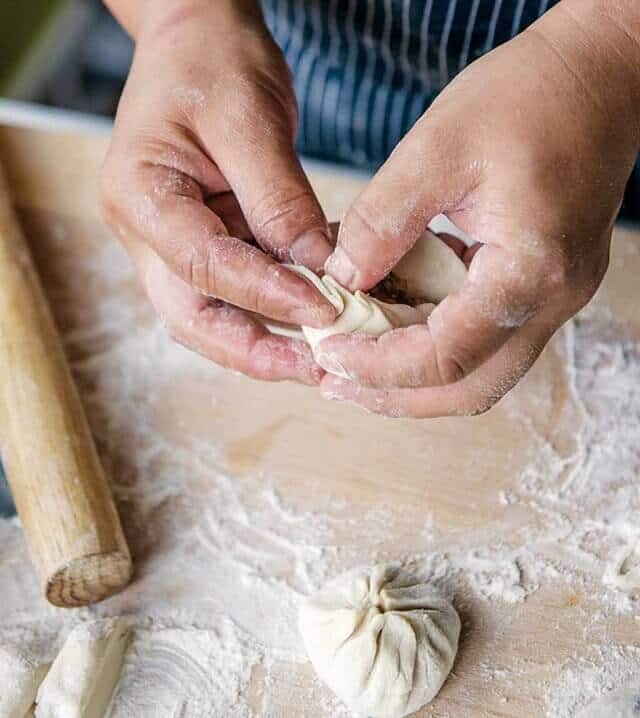 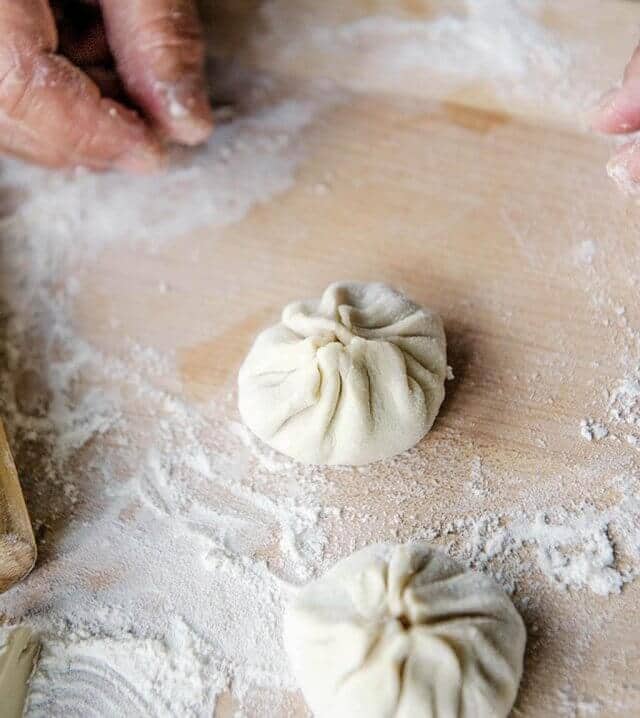 Once the dumplings are steamed, the soup turns back into liquid. How do you eat such a dumpling? Very carefully! Place a dumpling on a large spoon, preferably a Chinese soup spoon, which is deep enough to capture all of the soup. Take a little nibble, let some of the steam escape (so that you don’t burn your mouth), and also let some of the soup spill out into the spoon. Take small bites of the dumpling, eating and sipping at the same time.

This recipe is from Lee Anne Wong, Top Chef finalist from the very first season. I remember watching Lee Anne, cheering her on from my couch, “Go Asian sister, go!”

After watching Lee Anne, I had serious thoughts about going to culinary school, even filling out the application forms at a brand new culinary center institute up near my home. But instead of spending $60,000 a year in culinary school fees, I started Steamy Kitchen instead.

These days, I’m getting asked by culinary schools to come TEACH their students! I think I made a wise decision.

But, Lee Anne Wong inspired me to move in the right direction – a career in food and cooking. 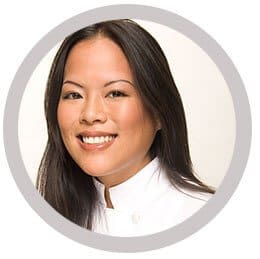 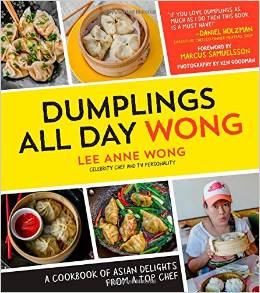 The recipe for Chinese Soup Dumplings is from Lee Anne’s new book, Dumplings All Day Wong. Included in the book are dozens of Lee Anne’s favorite Asian dumplings, with step-by-step photos (like the ones above.)

Folds such as Potstickers, Gyozas, Shumai, Har Gow, Wontons and more, along with countless fillings and different cooking methods such as steaming, pan-frying, baking or deep-frying, allow you to create awe-inspiring dumplings in innumerable ways. With friends and family begging to come over and try a new dumpling recipe from the master again and again, this book will be a go-to in your kitchen for years to come.

My very first xiaolongbao was at the original Joe’s Shanghai, which resides on Pell Street in New York City’s Chinatown. I had read all about their famously plump and juicy steamed delights in many various local food publications, so I was compelled to try them for myself. Forewarned by many who had devoured before me, I knew to be careful with the first bite, as these dumplings were notorious for the hot broth inside that could easily burn and injure. Whatever your plan of attack is, these will surely become a favorite, as they are mine. No kidding, the sky could be falling, but if I have a dim sum steamer full of xiaolongbao, I’ll be fine. These dumplings take a whole day or two to make, so get the soup stock going first. By sundown, you’ll have fresh soup dumplings in the comfort of your own home—what I consider to be one of the true secret keys to happiness. -Lee Anne Wong
[/content_band]

These bamboo steamers are inexpensive and you can set them on top of your wok.

If you don’t have a wok, use this steamer ring! I own one of these and set this on top of a large pot filled with water. Then I set the bamboo steamer stacks on TOP of the ring.

A note on chicken feet: Chicken feet happen to be great for making stock because of the natural gelatin and collagen they contain, and the price is usually pretty low if you can find fresh or frozen chicken feet. Wings are my other option as I find the meat can be pulled from the bones later on and used for a variety of recipes, and the meat adds great flavor to the stock.
Print Recipe
Prep Time 2 hrs
Cook Time 8 mins
Chilling gelatin 3 hrs
Total Time 5 hrs 8 mins
Servings 40 Dumplings

To make the gelatin:

To make the filling:

To make the dough:

To make the dumpling:

To steam the dumpling:

To make the dipping sauce

Recipe from Dumplings All Day Wong by Lee Anne Wong. Reprinted with Permission.
Tried this recipe?Let us know how it was!

This Xiaolongbal Chinese Soup Dumplings Recipe is one I posted years ago! Warning – it’s sorta porn-ish.