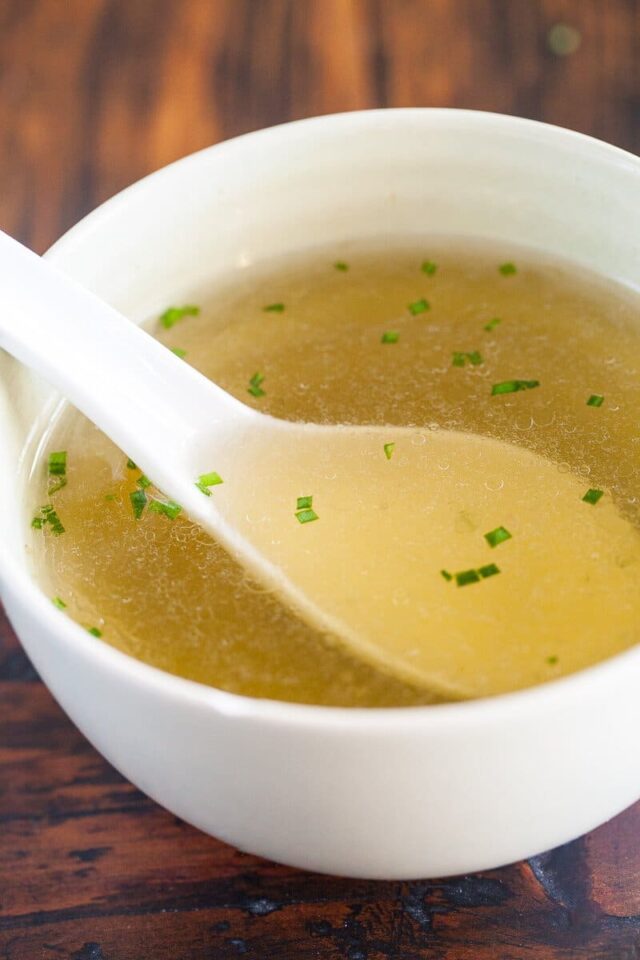 In Asian culture, soups and broths are part of everyday meals. A traditional Japanese breakfast would include a bowl of Miso Soup to warm the body. Chinese restaurants feature a long list of house soups, from an appetite stimulating Hot and Sour Soup to even a light broth served after dinner to cleanse the palate and complete the meal.

Growing up, Mom always had soup simmering on the stove. Every night, without doubt, there was a Chinese style soup on the table. I remember saving the soup for last, as a ritual to conclude a delightful home-cooked meal.

I’ve tried to emulate Mom, but we’ve got such an active lifestyle that a pot simmering for hours on the stove isn’t feasible. Instead, we use a large 6-quart slow cooker to make an Asian-style bone broth that will last the entire week for our family. 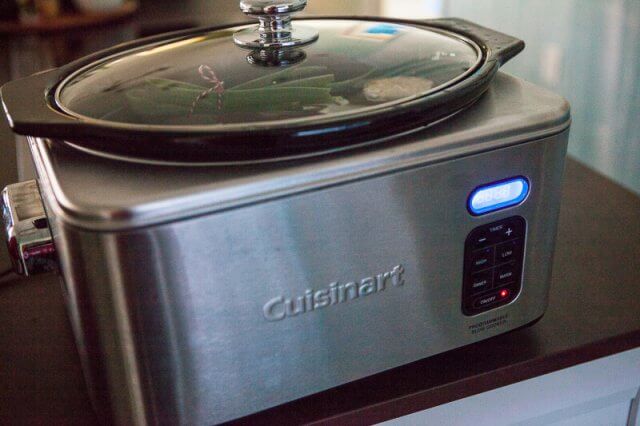 What is bone broth?

Bone broth is often gently simmered for 24 hours (or more!) to extract as much nutrients from the bones of an animal, whether it be fish, chicken, pork or beef. The long cooking time breaks down bone to release vitamins, collagen and calcium phosphate — nutrients that are good for us.

Sure, it’s a trendy thing right now, with restaurants offering drive-through bone broth served in a coffee cup for $9, cookbooks dedicated to the art of bone broths (I highly recommend The Nourished Kitchen Cookbook which features bone broth) and even an entire line of bone broth concentrates that you can buy.

What’s the difference between broth, bone broth and soups?

Generally, soups are made with meats, bones, vegetables, herbs, added grains, sometimes thickened with starches – and simmered for a couple of hours.

Broths are mostly made from meats or vegetables and left clear without very much else added. Broths are also simmered for a couple of hours, resulting in a light colored, light flavored broth.

Bone broths are cooked for a day or even longer. Your favorite Vietnamese restaurant most likely simmer their pho broth overnight, which is why the broth is so rich and flavorful. 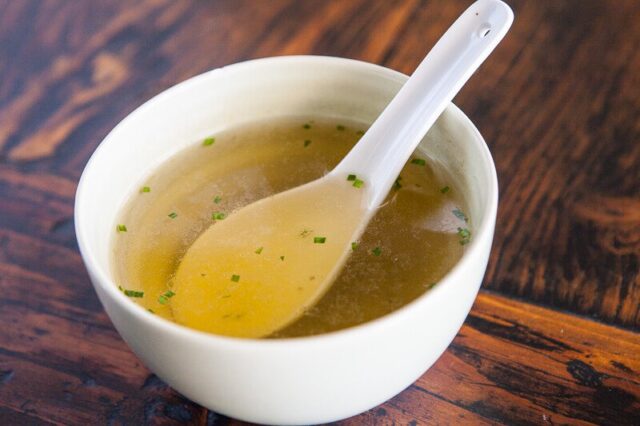 Like Nourished Kitchen, we make our bone broth in the slow cooker, and it will last us all week long. The process starts on Sunday night, and the slow cooker will do its magic all night long.

In the morning, we’ll enjoy bone broth as part of our breakfast. Every day, I’ll top off the pot with more water and keep the slow cooker humming along.

Each day, I’ll add a vegetable, switch out for fresh herbs, throw in a couple of umami-boosting Asian ingredients.

As the days progress, the bone broth develops new flavor, gets richer, smoother, fuller. We get the benefit of the valuable nutrition that’s normally locked inside the bones.

Some days, we’ll top off the bone broth with chopped herbs, or shredded seaweed just before serving. Or a spoonful of leftover rice in the bone broth is great too.

Key to bone broth – be gentle. The cooking process is slow and gentle, coaxing out flavor with very little bubbles (no violent boiling!)

Don’t stir. Especially after the first 2 days. The bones will be come very soft and will crumble if you stir the pot too vigorously, resulting in a gritty broth.

Use cheesecloth or herb/tea bags to contain any herbs, aromatics or spices that are very small (see below.) This avoids having you dig around, stir around to fish these items out.

Use a very fine mesh skimmer to skim the surface of the broth every day, especially during the first 6-8 hours. The “scum” will cloud your broth during these first few hours of cooking. What’s the scum made out of? Proteins, fats, microscopic bone fragments (especially if the bones were cut), oils, impurities. Get rid of it!

Ready for the next batch? Jumpstart your next batch with a little of the last batch of concentrated “liquid gold!” We call this “Infinite Bone Broth.” Restaurants do the same with broths, sauces and sourdough bread too. Seed the next batch with rich flavor you’ve already built.

The “holy trinity” of Chinese cooking is garlic, ginger and green onion. 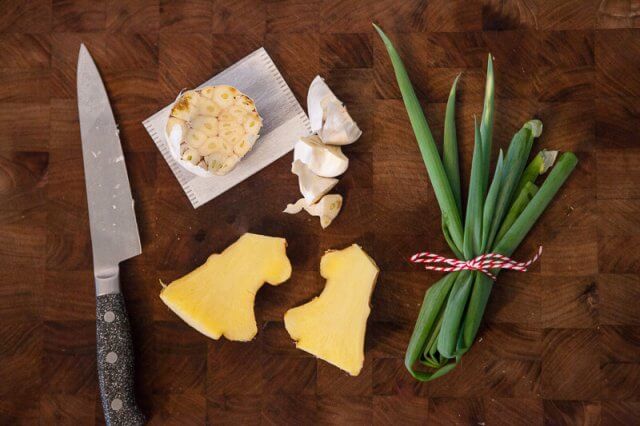 I’m not a fan of fishing out little pieces of ingredients, so I try to cut herbs so that they are easy to find and spoon out. The garlic head is cut in half. Sometimes, the cloves will separate (like above) but I’ll use a bag made for for DIY teabags or as an herb pouch (100 bags for $5.67) 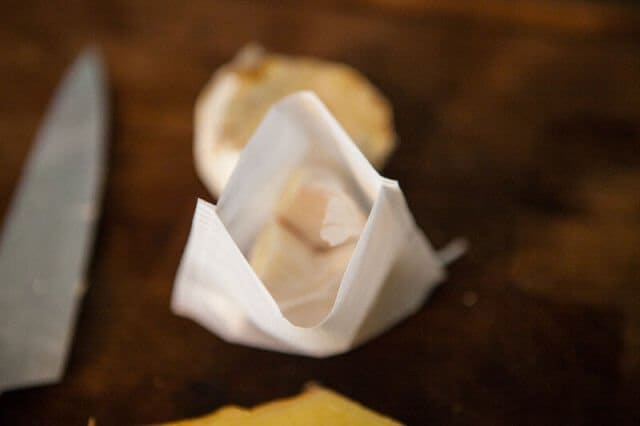 Fill it up with the garlic cloves that are loose. Fold the top over and the cloves or anything you put inside will stay put. You can also make your own with cheesecloth. I like to use these teabags for other spices too, like whole peppercorns or star anise – anything that would be hard to find and fish out. 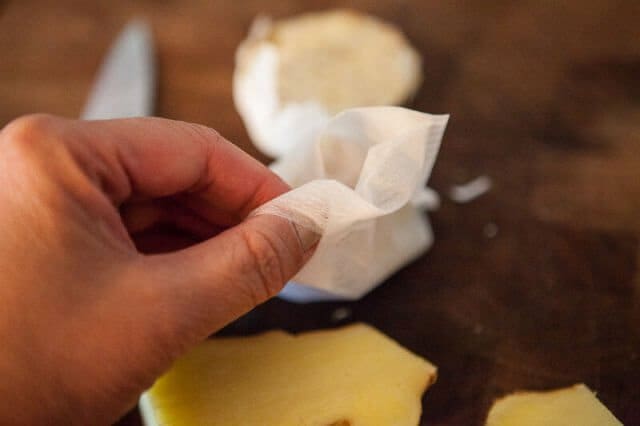 The green onions are tied with twine, again for easy removal. The ginger is a big hunk, just sliced in half.  I reserve the other half of the ginger + the garlic cloves in the bag + more green onion  – to add to the bone broth a couple of days later (I’ll discard the spent herbs/aromatics, replace with fresh.) 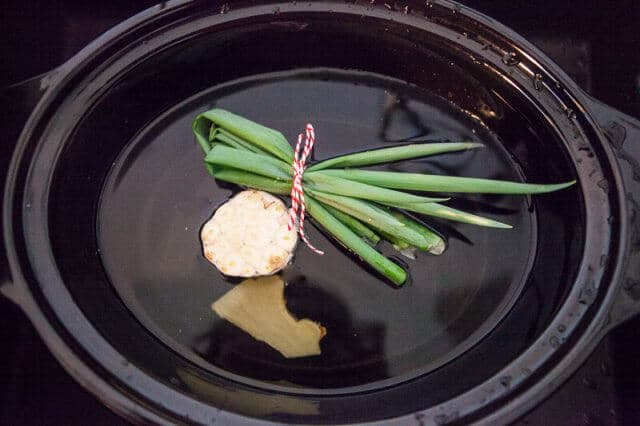 This week, I’m making bone broth with spareribs (it was on sale). Pork broth is very popular in Chinese cuisine. It’s just as popular as chicken broth is here in the U.S. Most of the Chinese soups that I make start with pork – for a lighter, more neutral flavor than beef or chicken. 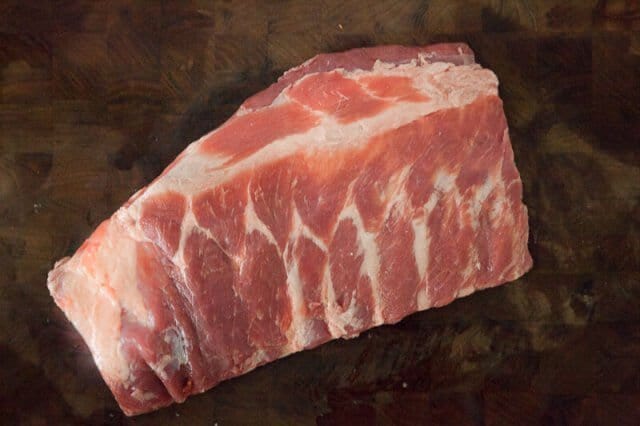 Some people like to cut off the excess fat, but I just leave it on. I’ll skim out the fats and oils later with a skimmer. 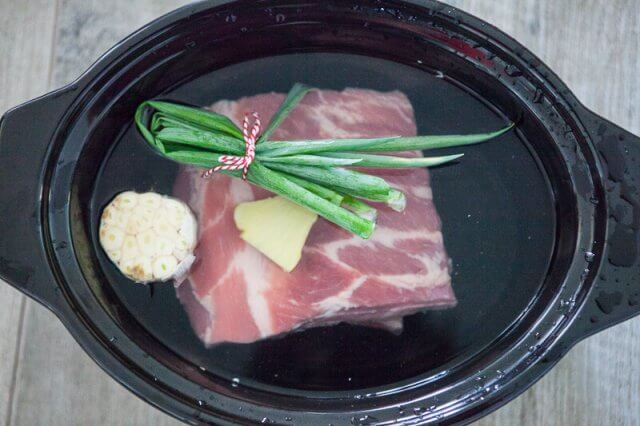 Everything goes into the slow cooker, set it on low and let it go. If you plan on making slow cooker bone broth often, I suggest getting the largest slow cooker you can find. This one is a Cuisinart 6 1/2 Quart Slow Cooker ($99) that works really well. It’s never failed us.

After a few hours, I’ll skim the scuzz with a very fine mesh skimmer. This skimmer mesh is so fine that it catches all particles AND surface oils and fats. 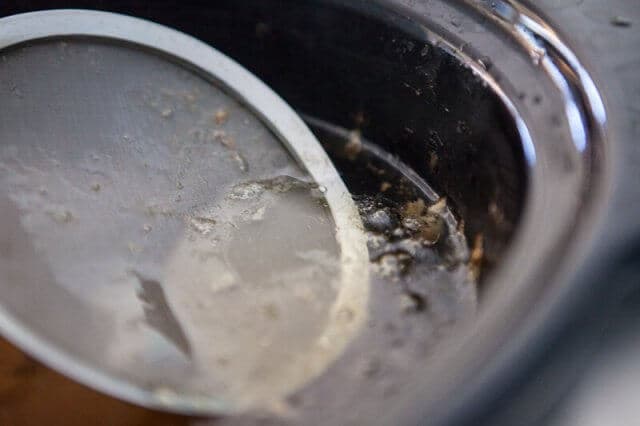 Look how rich this bone broth is the next day! Season with salt, or fish sauce. Season to taste. 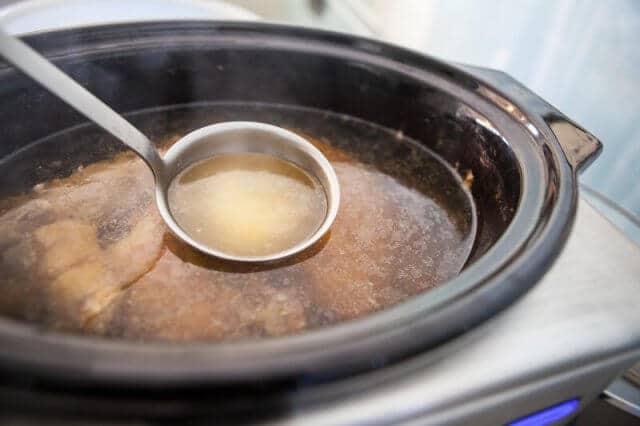 I’ll discard the spent green onion, garlic and ginger, and add fresh to replace. This time, I’m adding garlic chives and cilantro from the garden – again, tied  up to make it easier to remove. 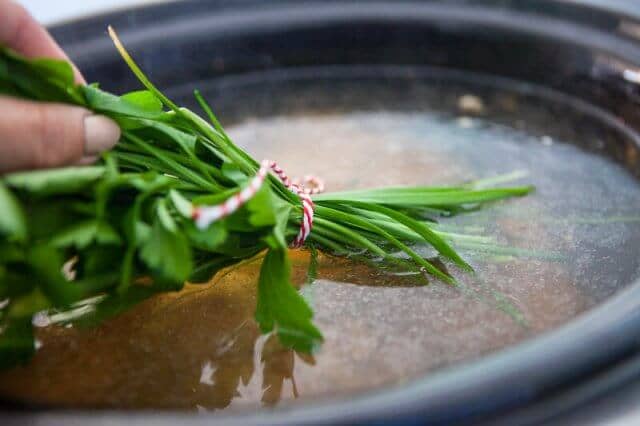 Top it off with fresh water. The slow cooker stays on all week, on low. 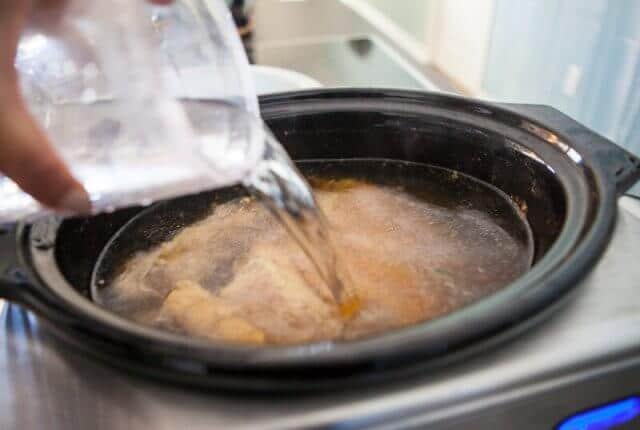 After a couple of days, I might throw in some Chinese dried ingredients for a massive flavor and umami-boost: 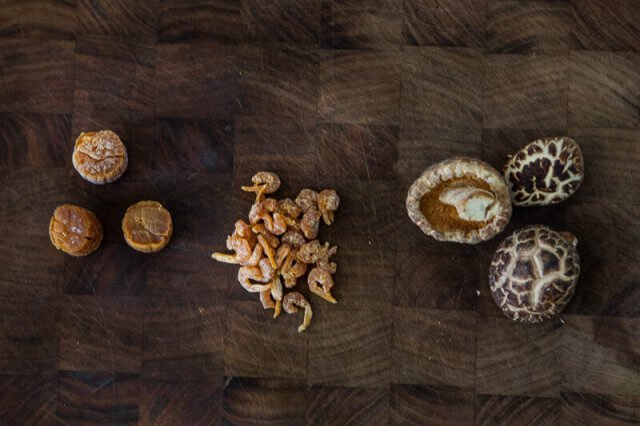 You can also add in sliced daikon and carrots for one of my very favorite home-style soups! Every trip back to my Mom’s house, I request her Daikon Carrot soup.

If you like cilantro, you can also add in a bunch of cilantro stems, which have just as much flavor as the leaves. I often use the stems for soups.

If you’d like Japanese flavor for a bone broth, add a small 6-inch piece of dried kombu and a handful of bonito flakes (place these in the tea bag.) By the way, kombu can be used over, and over again. Just rinse, wipe, and let dry completely before storing for next use. 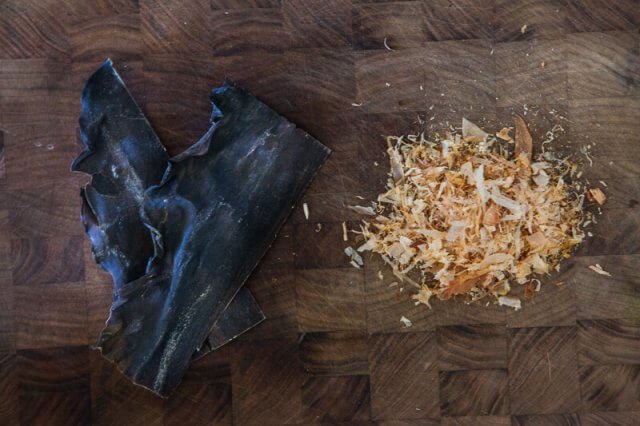 My favorite breakfast? Bone broth with a spoonful of leftover rice or grains, top with roasted seaweed. This type of seaweed is called Kizame Nori – or sliced, roasted seaweed. 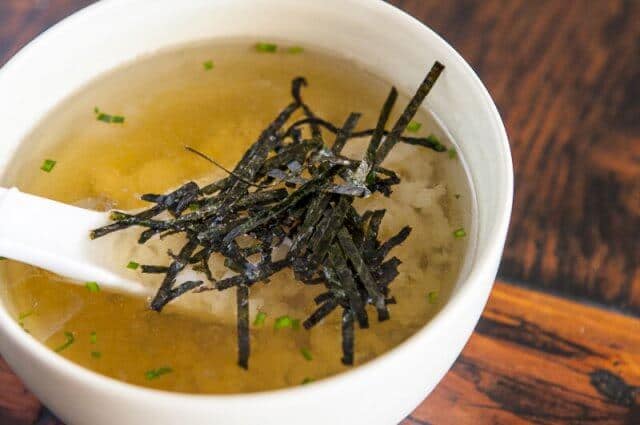 By the way, have you ever tried Ochazuke?

Also, if you’d like to fortify the Japanese bone broth with miso paste – do this separately. Miso paste cooked at high heat or for too long will break apart and become gritty. Ladle some bone broth into a separate saucepan. Bring to simmer if you need to, but if it’s coming straight from the slow cooker, there’s no need to heat it up. Turn off heat. Whisk just a couple tablespoons of miso paste into the soup. Be careful of how much miso you add, especially if you’ve already added salt to the bone broth. I prefer shiro miso (white miso paste) as it’s lighter and less salty than the others. Miso paste is always added off heat.

Add Vietnamese pho spices to a mesh bag or the tea bag (Here’s a recipe for Slow Cooker Vietnamese Pho.)

If you visit an Asian market, you can often find all these spices packaged, ready to go. Look for “Pho Spice Pack.” Instead of seasoning the broth with salt, season the bone broth with fish sauce. Start with 1 tablespoon, taste, and then add 1 teaspoon at a time until perfect.

What’s my favorite fish sauce? Right there in the sidebar is a free “Asian Masters of Flavor” ebook I wrote that includes my favorite brand! There’s a big difference between good quality fish sauce and crap, chemical-laden fish sauce. 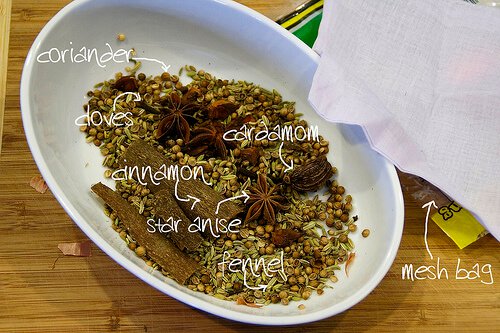 If you’re concerned with the cost of running a slow cooker throughout the week, it costs pennies per day!

We grow all of our own herbs and most of our own vegetables in our aquaponics garden and greenhouse. 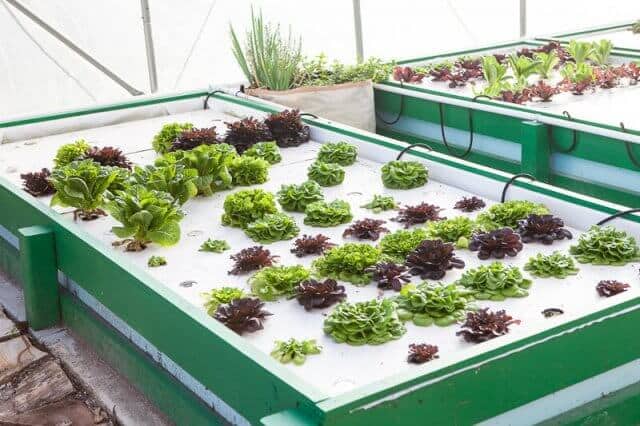 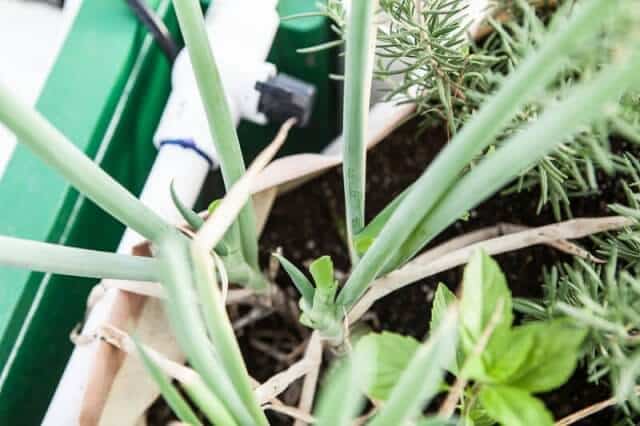 I prefer using pork or chicken for Chinese or Japanese style bone broth. If you'd like to use beef bones (great for Vietnamese bone broth), I suggest roasting the bones (350F for 30 minutes) first before adding them to your slow cooker. Not necessary, but it will give a richer bone broth. I don't normally roast pork or chicken bones - I just add them to the pot. Grassfed, organic is best.PORK: spareribs, neck, hock, really anything.CHICKEN: whole, raw chicken, or just the frame of a rotisserie chicken you've already enjoyed. You can also use chicken wings or chicken feet. Turkey works great too.BEEF: oxtail, knuckle, neck, short ribs. I also use beef bone marrow as well - but after roasting, I"ll spoon out the marrow, spread it on bread and sprinkle with sea salt for a little treat. Basically, too much marrow in the bone broth will make the broth greasy tasting. Short ribs have amazing flavor - I like to add them to any beef bone broth that I make.FISH: Fish bones and head. I like to do this traditional Chinese style with garlic, lots of ginger and green onion. Remove the fish skin and the thin, silvery lining in the gut area (very fishy taste). If the fish is raw, I prefer to roast the fish bones (350F for 20 minutes) - as this tames the fishiness smell and flavor of the bone broth. Most fish will work except for oily fish like mackerel.
5 from 1 vote
Print Recipe
Prep Time 5 mins